The $750,000 Flower Bowl Invitational featured older fillies and mares going 1 1/4 miles over Belmont Park's rain-soaked inner turf course. A field of eight went to post in this Grade 1 event, with Wonder Again sent off as the 9-10 odds-on favorite.

As expected, 6-1 shot Moscow Burning was allowed an uncontested lead, and jockey Jose Valdivia Jr. attempted to slow the pace down through a half in 52.55, six furlongs in 1:17.85, and a mile in 1:41.55, while favorite Wonder Again raced with her to her outside, settled a length back the whole way around. Turning for home, Moscow Burning drew clear, getting the jump on the favorite, and looked home free at the top of the stretch as Wonder Again showed no response when asked. The favorite dropped out of contention in the lane and finished a disappointing sixth. 9-1 shot Riskaverse, who saved ground along the hedge in fifth early, came wide into the stretch and rallied strongly down the center of the course to just get up in the final strides to prevail by 3/4 length over fellow closer Commercante, in a time of 2:04.65. It was a short head back to pacesetter Moscow Burning in third. Riskaverse lost this race last year but came back to win it on her second try. This was the second time this feat was accomplished by trainer Pat Kelly, the last time with Christiecat in 1991-1992.

Winning trainer Pat Kelly said, "After all the tough trips she's had, it's neat to get her back into the winners' circle for a big race. I haven't picked out too many easy spots for her, but she has been up to the task. It's amazing because it took us two times to win it with Christiecat, so it is neat to try it again and get it the second time. I would imagine, she will head off soon to be a Mommy, but she is still very competitive. Maybe we can hang around for another year. The Breeders' Cup is here next year (Belmont Park on October 29, 2005). Unfortunately, the Breeders' Cup (Filly & Mare Turf) is at a mile and 3/8 this year; we've been a little leery of the longer races. But the way she ran today, and with maturity, we could try it. I was worried because the pace was slow. But it looked like she was settled nicely." 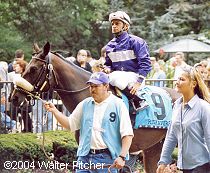 Riskaverse in the paddock before the race. Winning jockey Cornelio Velasquez said, "Pat (Kelly) told me to keep her behind the front horses and make my move with her at the 1/4 pole. That's what I did. For the final quarter, I had a lot of horse. I go her behind the slow pace, then brought her out for a clear run." 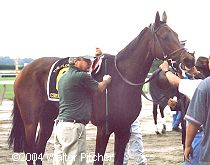 Second place finisher Commercante after the race. Her jockey John Velazquez said, "She ran good. I thought she ran a good race. The only thing she didn't do was win. I thought she had a good shot on winning the race today, but the other horse was too much." 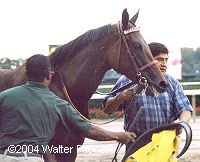 Third place finisher Moscow Burning after the race. Her jockey Jose Valdivia Jr. said, "She ran huge. Every time I've been on her, she's given me 110%. You kind of get to the point where you feel bad for the animal when they give their all and still get beat. The track is a little bit soft, but it is a track that she's handled before. I think it is going to set her up good for the Breeders Cup. I would not mind knocking heads with these kinds again. She definitely showed that she belongs. She had a very nice third, kept up with the winner."

Trainer James Cassidy added, "I thought the course caught up to her speed. It was much more yielding than it was in the Sheepshead Bay. Still, she tried to come back in the final strides to catch Frankel's horse (Commercante). She's tough. I'm going to talk to the owners about sending her to the Breeders' Cup. I cannot see why she shouldn't go, especially since we were considering it before the race." 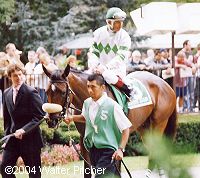 Beaten favorite Wonder Again who finished 6th in the paddock before the race. Her trainer James J. Toner said, "She only got beat a few lengths. They went slow, but she was right up there. I might have been a little too conservative with her training. We'll sit down and talk about our plans."

Jockey Edgar Prado added, "I have no excuse. There was as slow pace and we were right there. She hung in there at the half-mile pole. She felt fine at the 3/8 pole, and I thought I would have an extra gear at the top of the stretch. But I didn't. It happens sometimes."