Older horses were the order of the day on Sunday, with the $250,000 Saratoga Breeders' Cup Handicap at Saratoga and the $1 million Pacific Classic at Del Mar. Each event was contested at the 1 1/4 mile distance, the same as the Breeders' Cup Classic in October, making these very important races on the road to Lone Star Park.

With a pint-glass giveaway, picture perfect weather, and local hero Funny Cide in the field, a near-record attendance of 70,175 came out to Saratoga Race Course for the Grade 2 Saratoga Breeders' Cup. The crowd obviously bet with their hearts, sending Funny Cide off as the even money favorite in the field of seven in his first career start at the home track of his owners Sackatoga Stable. Edgar Prado got the mount as regular rider Jose Santos is out with an injury. Also in the field was 4-1 second choice Bowman's Band, and 6-1 third choice Sarava, who has not won a race since upsetting War Emblem in the 2002 Belmont Stakes.

When the gate opened, Richard Migliore sent 29-1 longshot The Lady's Group out to contest the early pace, and through a half in 46.40 and 3/4 in 1:10.90, battled on the front end with 17-1 shot Congrats to his outside, and Funny Cide out in the three-path around both turns. Entering the turn for home, the two longshots dropped out of contention, while Funny Cide continued to race wide. Bowman's Band slipped through on the rail on the turn and briefly had the lead, after a mile in 1:36.02, but tired through the lane. 7.50-1 shot Evening Attire, who settled back in fifth early on while racing on the outside away from traffic, rallied well through the stretch, blew right by Funny Cide and Bowman's Band at the 1/8 pole, and drew off to win convincingly by 5 widening lengths. The final time was 2:00.83 over the fast main track. It was another 3 3/4 lengths back from Funny Cide to the tiring Bowman's Band in third. Sarava raced in midpack throughout and had nothing left for the end, finishing fifth. 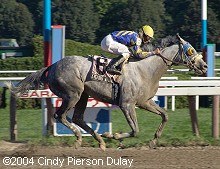 Evening Attire and Cornelio Velesquez alone out front at the finish. Velasquez said, "I had a good trip; he's a nice horse. He won easy. I knew I had a lot of horse at the 1/8 pole. I was waiting, waiting to make my move. He is strong the last 3/16." Velasquez also won the Alabama Stake (G1) aboard Society Selection on Saturday.

First time by with The Lady's Groom, Congrats, and Funny Cide vying for the lead with eventual winner Evening Attire rating behind them. 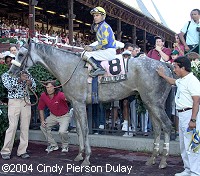 Evening Attire in the winner's circle. Winning trainer Pat Kelly said, "It was a good race. Everyone thought he wanted the mud, but he's actually run pretty good on a fast track. He's very well suited for the mile and a quarter. He's kind of an old throwback horse: the longer the better. When he's on his game, he'll stalk and the jock will have a lot of horse. Once they straightened away, he kicked in that long stride and finished good. This was a great confidence builder for him and the crew at the barn." Kelly said that Evening Attire would skip the Woodward and go next in the Jockey Club Gold Cup at Belmont Park. 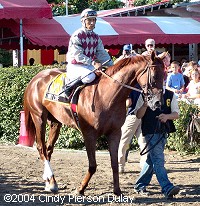 Second place finisher and heavy favorite Funny Cide steps onto the track for his first race ever at Saratoga. His jockey Edgar Prado said, "The horses in front of me were drifting. He was very wide going to the 1/4 pole. He was trying hard. He ran hard, but the winner was just much the best today." 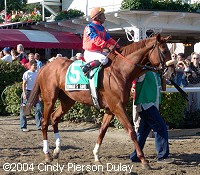 Third place finisher Bowman's Band in the post parade. His jockey Jorge Chavez said, "We had the perfect trip and he wanted to run. He was pulled me so hard that I had to eventually let him go because I didn't want to discourage him. He gave it his best. He just hung in the last 1/16 of a mile." 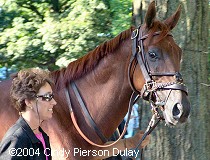 Everyone was cheering for Funny Cide and he certainly seemed to know it. Here he is in the paddcock before being saddled. His trainer Barclay Tagg said, "He lost ground all the way. He ran good, I guess. He got beat. The horse is that way: he's a strong horse. There's not much you can do about it. He was so wide. If you have to go wide around both turns in any race, it's a disadvantage. I thought he had a shot at the top of the stretch, but I knew he lost a lot of ground. 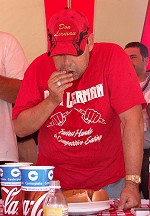 Also on Sunday at Saratoga was the Nathan's hotdog eating contest which was the first qualifying round for next year's championship on July 4th 2005. As expected, well known eating contest pro Don "Moses" Lerman was the winner with 20 3/4 hotdogs in the 12 minutes allowed. He was easily in front of the second place finisher who only downed 16 hotdogs. Lerman has competed in the championship for the last 5 years. Takeru Kobayashi of Japan holds the current world record with 53 1/2 hotdogs in 12 minutes.