The best 3-year-old fillies on the east coast met up in the Grade 1 Alabama Stakes at Saratoga, the final leg of the New York Triple Tiara series. A field of eight went to post in this 1 1/4 mile event, with a total purse of $750,000. Sent off as the overwhelming 3-5 favorite was Ashado, who has dominated this division so far with wins in the Coaching Club American Oaks and the Kentucky Oaks and has Saratoga leading rider John Velazquez aboard. Stellar Jayne, who had upset her in the Mother Goose two starts back, was virtually dismissed at 10-1.

As the field got underway, 9-2 second choice Yearly Report and 21-1 longshot Susan?s Angel dueled on the front end, cutting quick early fractions of 23.65, 47.23, and 1:11.42 while favored Ashado stayed just in behind them in third, going wide to avoid the deeper inside going over he sloppy main track. Turning for home, the pacesetters succumbed to the fast pace and Ashado inherited the lead after a mile in 1:36.42. However, the race was set up perfectly for the closers. Stellar Jayne, who raced four wide in fourth early on, made her move in upper stretch and got her head in front of the favorite with a furlong to go. However, 6-1 shot Society Selection, well out of it down the backstretch, came out four wide on the turn, and rallied strongly to catch Stellar Jayne in deep stretch to win going away by 2 1/2 lengths in a time of 2:02.70 for the 1 1/4 mile event. It was just a 1/2 length back to Ashado in third, and 5 1/4 lengths back to Yearly Report. Once again, Society Selection?s trainer Allen Jerkens lived up to his name as the Giant Killer, with his third Alabama Stakes winner. 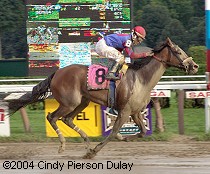 Society Selection alone at the finish. Winning jockey Cornelio Velasquez said, "At the top of the stretch, I had a lot of horse left. At the three-sixteenth, I pushed my filly. She ran. She relaxed. There was some pace, and I thought at the quarter-pole I would win easy." 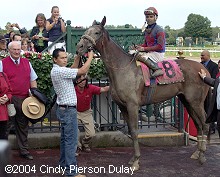 Society Selection in the winner's circle with her trainer H. Allen Jerkens, the "Giant Killer" (left, red vest). Jerkens said, "She seems to like it better when she is outside, for some reason. She'll tuck in for a while, but when she makes her move, she wants to be outside. You're always surprised when you win a Grade 1, especially with a longshot. It is so hard to go from sprinting to a mile and a quarter. It's got to put her in the mix (for 3-year-old filly champion). That's what you try for, and that's what Mr. (owner Irving) Cowan wanted. Most of the things you do in this game turn out good by accident. We?ve got to see how she comes back and how she does in the fall. Sky Beauty never did any good late in the fall. I'm sure they'll want to try another Grade 1, probably the Beldame." 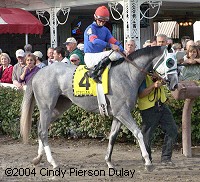 Second place finisher Stellar Jayne heads to the track for the Alabama Stakes. Her trainer D. Wayne Lukas said, "We caught a horse who had an affinity for the racetrack. I didn't like the condition of the track, since it rained this morning. She really hasn't trained well on it. But I can't make any excuses for her. Society Selection was a legitimate filly coming into the race. I thought she ran her eyeballs out. It was a good race, and you can't win them all." Jockey Robby Albarado added, "Coming for home, we were neck and neck with Ashado, although I had to use my horse to get to Ashado. That compromised us for something that would be running late. Obviously, the "Giant Killer" (Jerkens) got us. Still, my filly ran well on a track that she doesn't like." 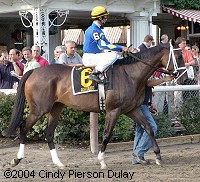 Third place finisher and heavy favorite Ashado in the post parade. Her trainer Todd Pletcher said, "We were close to the pace, as we anticipated we would be. It was becoming a little bit of a tiring track. She handles an off-track fine. This was a little bit of a different off- track. She prompted some pretty fast fractions, and she got a little tired." Asked where she would go next, Pletcher complained that the Gazelle is too soon and the Beldame is too late: "Everything is positioned exactly where you wouldn't want it to be to get to the Breeders' Cup. We'll assess all the options." Jockey John Velazquez said, "She ran awesome. There was just a little too much fight in there. She was in the bridle early in the race. I let Jerry (Bailey on Yearly Report) go early in the race, and I sat next to him and (Susan's Angel) came after me. There was just too much fighting, and I had to move much earlier than I wanted to."

Some of the top 2-year-olds in the country met up in the Grade 1 Hopeful Stakes, a 7-furlong sprint on the Saratoga main track and an obvious stepping stone to the Breeders' Cup Juvenile. Seven juveniles went to post in this $250,000 event, including 7-10 favorite Afleet Alex, undefeated in three career starts including the Grade 2 Sanford over the same track, each win by wide-open lengths.

At the start, 3-1 second choice Devils Disciple shook off 33-1 longshot Winning Expression and led the field through a half in 44.79 while saving ground on the rail. Afleet Alex bumped with 9-1 shot Consolidator in the opening strides, and this shuffled his back to fifth in the first quarter mile. However, jockey Jeremy Rose got the favorite into gear, saved ground on the turn, and then swinging out four wide for the drive, closed well to just get up by a neck for the win over Devil's Disciple in a time of 1:23.58 over the sloppy going. It was another 1 3/4 lengths back to 8-1 shot Flamenco in third. 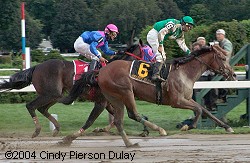 Afleet Alex just gets by Devils Disciple in the Hopeful. His trainer Tim Ritchey said, "He really wasn't running his race. Once Jeremy (Rose) got him out of he mud and he hit him left-handed the last five or six strides, it was the normal Alex. It is something we'll have to work on. We'll have to work him behind horses, so he can get some more dirt in his face. He obviously has the ability; we just have to make sure it doesn't come up that close again." 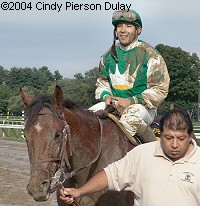 A beaming Jeremy Rose aboard Afleet Alex heads for the winner's circle. Rose said, "It was right-handed when he really took off. They were going pretty fast, and the mud was coming back pretty hard. He was still gutsy and he was hanging in there, but I could tell he wasn't doing his best running in there, so I got him out. When I hit him left-handed he drifted out, and I thought I was going to run second. Then I hit him right-handed and he took off and I kept hitting him." 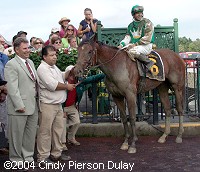 Afleet Alex in the winner's circle with his trainer Tim Ritchey (left, beige suit). Ritchey said, "We were looking at the toughest 2-year-olds on the East Coast; maybe even the whole country. Here, he had to show his heart and show his class. We'll re-group to make sure he comes out of the race okay." Ritchey might skip the Futurity with Afleet Alex and train him up to the Champagne Stakes instead. 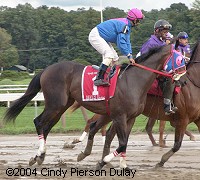 Second place finisher Devils Disciple in the post parade. His trainer Joe Waunsch said, "I think the (rail) post didn't help us any. He had to stay where he was, and the other horse kept pressing him all the way. If he had an outside post, where he could not worry about losing position, we might have been okay." Waunsch is leaning towards sending him to the Lane's End Breeders' Futurity at Keeneland instead of the Champagne. 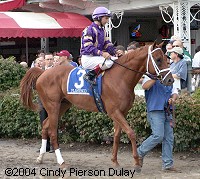 Third place finisher Flamenco heads to the track for the post parade. His trainer Todd Pletcher said, "He gave everything he had. He ran a hard, gutsy race against the best 2-year-olds." Jockey Jerry Bailey added, "He ran hard. He broke extremely well and got a great position. He gave me a little chance going into the turn. He gave me all he had, but he couldn't run down the leader and couldn't hold off the closer. But he handled the track well."