Michael Tabor and Derrick Smith's Sense of Style toyed with six other two-year-old fillies Friday afternoon, then dismissed them with a sudden flourish in the stretch to win Saratoga's 113th running of the seven furlong Grade 2, $250,000 Spinaway by 6 3/4 lengths.

It was the second start for this filly, who broke her maiden here on August 1st at six 1/2 furlongs. A daughter of Thunder Gulch, who in 1995 was the last Kentucky Derby winner to win the Travers, Sense of Style sat on the outside of Portsea and Miss Matched as the fractions went in :22 3/5; :45 3/5 and 1:10 3/5. But as if bored with the whole drama, jockey Edgar Prado asked Sense of Style for more and she had plenty to spare, drawing off to win in 1:23 4/5. Miss Matched held on for second while Play With Fire rallied from last to get third. 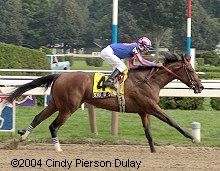 Sense of Style winning by over 6 lengths in the Spinaway. Jockey Edgar Prado said, "She's a very nice filly. When she made the lead, she started looking around a little bit. She's very, very professional. I have a lot of confidence in this filly. Today, she broke a little better than the last time. She's bred for the distance; she wasn't even blowing hard coming back. It was like after a workout." 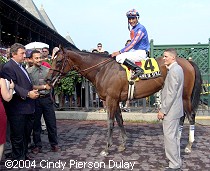 Sense of Style in the winner's circle with trainer Patrick Biancone to the left. He said, "She's a really good filly. Seven furlongs, I would say, is going to be the minimum she wants. She's very mature. She's strong and relaxed and has all the qualities. I think she has a great future. Before she wanted to stay next to the horse she's with, and today, she took off. She wouldn't have done that a few weeks ago. Going in the Hopeful was a thought, but this is a more sensible race because it is easier than the Hopeful. We are going to go slowly, because she could be an Oaks filly. The way she is bred, distance will never be a problem. If she keeps going that way she's been going, we may go for the Breeders' Cup [October 30th, Lone Star Park]. We'll look at the Matron [Grade 1, $300,000, one mile, two-year-old fillies, Sunday, September 19th, Belmont Park]." 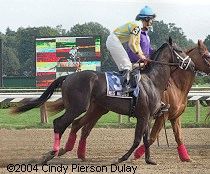 Second place finisher Miss Matched in the post parade. Her trainer John Ward said, "We got in a tangle leaving there. She was a little anxious in the gate. We're as happy as we could be. It plays right into what we want to do, which is to go around two turns. She'll rate, she'll do anything you want her to do. She'll be pretty hickory in her next effort. She'll probably run in the Alcibades [Grade 2, $400,000 mile and a sixteenth, October 8th] next around two turns." 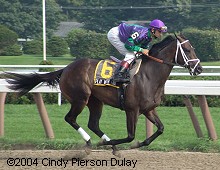 From a NYRA press release.