The $1,520,333 Hambletonian, celebrating its 84th renewal, is one of the world's most prestigious harness races, featuring the best 3-year-old trotters going the standard 1 mile distance, one full lap of the Meadowlands track in New Jersey. A full field of 10 lined up behind the starter on Saturday afternoon before 25,754 spectators, with Muscle Hill sent off as the 3-10 favorite for trainer Greg Peck and driver Brian Sears over 4-1 second choice Explosive Matter, trained by Noel Daley with Ron Pierce in the bike. The rest of the field was dismissed at double digit odds, led by 10-1 third choice Hot Shot Blue Chip for trainer Jonas Czernyson and driver Mike Lachance.

When the field was sent underway, driver Brian Sears took full advantage of the inside post and sent Muscle Hill to the front immediately. He set fractions of 27 1/5, 55, and 1:23 while 1 1/2 lengths in front of Explosive Matter who sat behind in second the whole way. Entering the stretch, Sears asked Muscle Hill to pull away and he did, widening his lead the length of the stretch and finishing under wraps 6 lengths clear in a track record tying 1:50 1/5, also a new stakes record. It was another 3 1/4 lengths back from Explosive Matter to 60-1 Calchips Brute third. 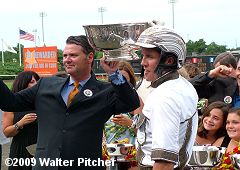 Trainer Greg Peck and driver Brian Sears celebrate with the trophy in the winner's circle. Sears, celebrating his first Hambletonian, said, "It's very humbling to win such prestigious races on a day like today. I knew I had the horse this year to get it done and I never had any doubts.  This horse has just been waiting for me to call on him.  I knew he's been sitting on a big one and he didn't let me down." Sears set a world record for earnings in a single day by a driver, his 5 wins on the card worth a total of $1,555,674.50.

Peck said, "Midway around the last turn, I could see Ronny (Pierce) tapping Explosive Matter and I knew what that meant. I know what Muscle Hill is like and when Brian steps on the gas he's like a sports car that just goes into overdrive and does it easily. I thought he'd go in 1:50 today." 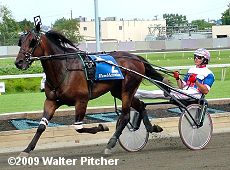 Second place finisher Explosive Matter in the post parade. His trainer Noel Daley said, "We were second best; he beat us fair and square. He might go to Chester (for the Colonial Trot) next Sunday. We will see how he comes out of the race today. He will have a little break after that. There are still a lot of races left for the 3-year-old trotters. This is the big one, but they have only just started."

His driver Ron Pierce added, "I got to sit in the two hole, that's what I wanted. Leaving the gate, the horse that Mike was driving (Hot Shot Blue Chip), made a break. Nobody else's left, so right there I figured that we were at the mercy of what Brian did. I started chasing my horse a little bit in the turn to keep up. Then in the lane, Muscle Hill exploded. He was trotting home real strong." 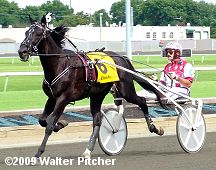 Third place finisher Calchips Brute in the post parade. The 60-1 longshot raced back in 6th early, as many as 6 3/4 lengths off the pace, then closed well late to get third beaten 9 1/4 lengths at the finish. The Trond Smedshammer trainee improved his record to 4 wins, 3 seconds, and 6 thirds in 16 starts for owner-breeder Diane Giuliano of Solebury, PA. Driver John Campbell said, "We never left the rail until midstretch. He saved ground and gave a great effort. He got third and I am very happy with that."


The distaff counterpart to the Hambletonian is the $783,042 Hambletonian Oaks for 3-year-old fillies. After 1 scratch, a field of 9 went to post with Elusive Desire sent off as the 3-2 choice over 3-1 second choice Raising Rachel and 4-1 Moonlight Kronos.

12-1 OK To Play battled for the lead with Elusive Desire to her inside through fractions of 28, 55 4/5, and 1:25 1/5. Entering the stretch, the pacesetter tired but 6-1 Broadway Schooner, who stalked the pace in fourth early, came through to take the lead at the 1/8 pole. Raising Rachel rallied late but Broadway Schooner held her off in the final strides by a nose in 1:54. It was just a head back to favorite Elusive Desire third, and neck back to 19-1 Margarita Momma fourth, in a four-horse blanket finish. 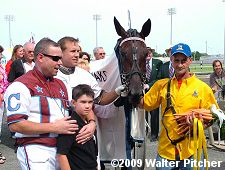 Broadway Schooner in the winner's circle with trainer Jim Campbell and driver Brian Sears. Sears, who became the first driver to sweep the Hambletonian and the Oaks in the same year, said, "I got goose bumps when the four fillies came up to us. I kind of got stuck first over.  I thought Jack (Moiseyev) would pull (Raising Rachel), but (Broadway Schooner) was hanging in there, real game, and they weren't really swarming in on her too quickly.  I was going to be happy finishing second, I knew it was tight.  I'm just so happy she ended up on top."

Campbell added, "I thought we got beat at the wire, but this was one of those pleasant surprises that went in our favor. We are all just thrilled. Especially proud of this horse is her caretaker, Walter. He's just on Cloud Nine right now. She went a really tough race, went first over. Brian kept her alive. She definitely earned it today, Brian settled her nice from the gate. He had to move when he did. I thought he might flush a little cover, but he didn't, he just rode up patiently, kept her alive right to the wire."


A full field of ten 2-year-old trotters competed in the $523,600 Peter Haughton Memorial. 11-1 Wishing Stone was quickest away through a quarter in 27 3/5 seconds while to the outside of 53-1 Plan B in HD who stalked him second on the inside. Down the backstretch, Plan B in HD took over the lead through a half in 56 seconds, battling for the lead with 9-10 favorite Lucky Chucky into the stretch. Lucky Chucky opened up a 1 1/4 length advantage at the quarter pole through 3/4 in 1:25 3/5, but 2-1 second choice Holiday Road, who sat back in fourth early, came through at the 3/16 pole to take over the lead in mid-stretch and easily held off late-running 7-1 Pilgrims Taj by 1 1/4 lengths in 1:54. It was another 1 1/2 lengths back to favorite Lucky Chucky third.

Winning driver Brian Sears said, "I had to just settle him back down.  When I was about to put him back in the hole, he responded to me well.  He stuck back in there and relaxed and I was able to save him.  No one was really coming on early, so I was able to wait pretty long before I pulled him first up.  He was very confident."

Winning driver Dave Miller said, "We planned going into the race to race her off cover. It worked out.  I was a little nervous going around the last turn when Ronny (Pierce and Costa Rica) cleared and opened up, but she loves chasing horses down and she doesn't stop until she gets by them.  She's really mature mentally.  Right from the start she showed the right attitude to be a good horse and she just proved it again."

Winning driver Dave Miller said, "I didn't know if he would get the front as easy as he did.  I was thinking to leave and maybe try to work out a trip.  He grabbed the lead and I settled him in.  John (Campbell) came with Bettor Sweet and I figured that was a good horse to follow.  I was able to stick until the last turn then I moved him and he exploded."


The $300,000 Nat Ray Free-For-All Invitational featured ten older trotters ging the standard 1 mile distance. 9-2 second choice Lanson and 5-1 Glen Kronos battled for the lead around the clubhouse turn through an initial quarter mile of 27 4/5, but driver Andy Miller hustled 3-5 favorite Lucky Jim to the front entering the backstretch taking the turn wide, getting the half in 55 2/5 and 3/4 in 1:23 1/5 while 2 lengths in front of Glen Kronos. Lucky Jim left the rest of the field in his wake through the stretch, opening up to win by 4 1/2 lengths in 1:50 1/5, equaling the all-ages world record for a trotters on a mile track. It was another 1 3/4 lengths back to 54-1 Gift Kronos third.

Winning driver Andy Miller said, "He was as good as he has ever been today. He has been great all year.  He went a mile in 1:50 1/5 pretty handily today.   He is an amazing animal.  He's got the Breeders Crown left (on August 22).  That is probably it for this year.  We will shut him down and get him ready for next year."