The $1 million Hambletonian, the first leg in trotting's Triple Crown, was contested at the Meadowlands on Saturday. A crowd of 30,117 was on hand on a windy, chilly, overcast afternoon. A full field of ten 3-year-olds lined up behind the gate, consisting of the top 5 finishers of last Saturday's elimination races. Sent off as the 2-1 favorite was Tom Ridge, winner of the fastest of the eliminations, and whose winning time was the fastest Hambletonian elim time in history. Also respected in the wagering were Cantab Hall at 2.80-1, and Cash Hall at 3.10-1.

As the field crossed the start/finish line, 10-1 shot Eilean Donon broke stride and immediately took himself out of contention. Favored Tom Ridge went to the front as expected and was loose on the lead through an opening quarter in 28 2/5 and a half in 57 2/5. Trailing in behind him pressing the pace were Cash Hall and Cantab Hall. 9-2 fourth choice Windsong's Legacy stayed parked wide around both turns in fourth early, staying out of traffic. After Tom Ridge set a brisk 3/4 time of 1:26 3/5, driver-trainer Trond Smedshammer sent Windsong's Legacy toward the leaders, getting the jump on the two Halls. By the 1/8 pole Windsong's Legacy got his nose out in front, as Tom Ridge quickly dropped out of contention succumbing to his quick pace. Windsong's Legacy easily held off Cantab Hall by a length to win the Hambletonian in a time of 1:54 1/5 for the mile distance. It was another 2 3/4 lengths back to Cash Hall in third. Tom Ridge faded to eighth beaten 18 1/4 lengths. The win improved Windsong's Legacy to 5 wins in 7 starts in 2004, and career earnings of $876,324. 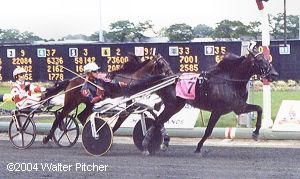 Windsong's Legacy a length out front of Cantab Hall at the finish. Breeder Paul Spears of Windsong Stables said, "(Windsong's Legacy) was an orphan foal. His dam was the first broodmare that I ever bought. I had three previous colts out of her. About three weeks after she foaled him she colicked and unfortunately died despite surgery. But he certainly has been named appropriately and carrying on her memory in proud fashion." 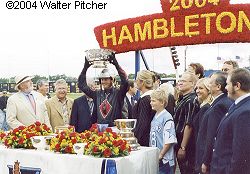 Winning driver-trainer Trond Smedshammer holds up the Hambletonian trophy during the winner's circle celebration. He said, "It's feels good now but it's going to feel even better tomorrow. To both train and drive, you can't top that. It means everything to me. It hasn't sunk in yet. I was actually considering getting around Cash Hall to avoid excess cover, but when one horse (Lantern's Law) made a break I decided just to stay in behind John (Campbell, driver of Cash Hall). The only time I was worried was when John put the pedal just before the half. Before, I knew exactly what Ronnie (Pierce, driver of Tom Ridge) was going to do, he wanted to stay in front. Then John took off on him. I was never tempted to pull (the earplugs) before I came off the 3/4, I knew this horse in the stretch was going to give me a good run. I did pop the earplugs, it was easy but you never want to take a chance. " 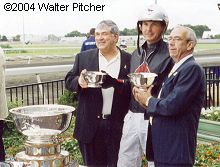 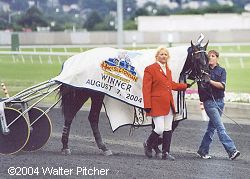 Windsong's legacy parading after the win. Co-owner Ted Gewertz said, "Well, it's a joyous occasion for all the connections. We sold a large part of the horse earlier in the year. It was a poignant moment for (co-owner) Pat Spinelli, whose husband passed away last week. But it's a good triumph. It's a double thrill for (Smedshammer), since he drove and no one can criticize his driving anymore." Gewertz announced that 5% of the purse won would be donated to the American Cancer Society. He explained, "Ron (Spinelli, late co-owner) and I were the partners originally. We sold a major interest of the horse to Anne Brannovil. Ron unfortunately didn't live to see today, he died last Saturday night, and Trond's dad also died of lung cancer last year. It was only fitting that a contribution be made." 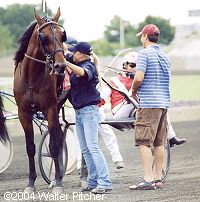 Second place finisher Cantab Hall returns after the race. Driver Mike Lachance said, "This was a tough loss today because we have the best horse in the race. I am just grateful to have our horse back. Three weeks ago we didn't know what to expect from him. He felt great today, definitely his old self. He was just trotting 100 miles per hour. The race set up the way I expected. I thought John's horse would be first up and Trond would be in the back." 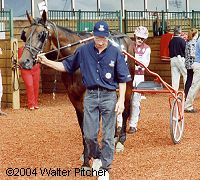 Third place finisher Cash Hall heads out from the paddock to the track. His trainer Bob McIntosh said, "He had a good race. He was parked out and we were given good cover until Trevor Ritchie's horse, Lantern’s Law, broke. We had to take a lot of air. That took a lot out of him. He’s a green horse and we had to put a lot of pressure on him coming up here [to the Hambletonian] but we'll be back in the fall."

On the undercard was the $500,000 Hambletonian Oaks for 3-year-old fillies. Overwheling 7-10 favorite Peaceful Way led the pack through 3/4 in 1:25 1/5 but unfortunately broke stride late, finishing third but disqualified to last for violation of the breaking rule. 17-1 longshot Silver Springs rallied from seventh early on, grabbing the lead with a furlong to go, and drew away to win by 2 1/4 lengths over 4-1 second choice Housethatruthbuilt in a time of 1:53 3/5. 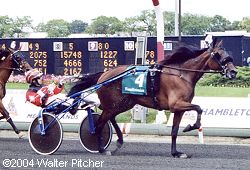 Silver Springs winning the Hambletonian Oaks over Housethattruthbuilt. Driver George Brennan, driving Silver Springs for the first time, said, "I didn't know much about her, but knew she went a good mile last week. I appreciate getting the mount. She was strong all the way." 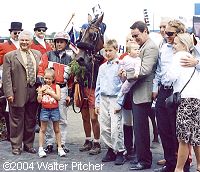 The happy connections in the winner's circle. Winning trainer Jan Johnson said, "She has always been there from her first stakes race to the last. I thought she was going to get into the flow, and when you keep after her she keeps digging. She's going to go in the (filly division of the) World Trotting Derby."