Ten three-year-old trotters faced off at the Meadowlands in the richest-ever Hambletonian, with a record purse of $1.5 million, before a crowd of 31,245. The Hambletonian is the first leg of harness racing's Triple Crown for trotters, followed by the Yonkers Trot and the Kentucky Futurity. As expected, Classic Photo was sent off as the prohibitive 1-2 favorite, off his dominating 3-length victory in his elimination heat last weekend. The other elimination winner, Vivid Photo, went off the 7-1 second choice.

When the field got underway in front of the stands, 12-1 shot Muscle Memory got the lead right away through an initial quarter in 27 seconds, with 8-1 third choice Strong Yankee battling with him around the clubhouse turn. Driver Brian Sears urged Strong Yankee to the front at the head of the backstretch, as he led the field through a half in 55 and 3/4 in 1:24, while Muscle Memory continued to hold second. Ron Pierce kept the heavily favored Classic Photo wide but close up in fourth for the backstretch trip. Turning for home, Classic Photo made his bid for the lead, but Vivid Photo, who was back in seventh early, took and even wider path around the far turn and was full of run through the lane. With less than a furlong to go, Vivid Photo took over the lead along the far outside and drew away to a 2 3/4 length victory over Classic Photo, in a time of 1:52 3/5, a world record for a three-year-old gelded trotter. It was another 2 1/2 lengths back to Muscle Memory in third. 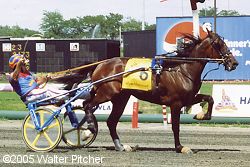 The start of the 2005 Hambletonian. 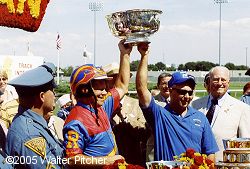 The win was driver, trainer, and co-owner Roger Hammer's first in the Hambletonian, in his first start in the race. He said, "I know the horse. He's a strong finisher, and he wouldn't give it up. It's great. I can keep the bill collector away for a while. This horse never showed racing off the pace. But I figured I could out-brush all of them. I didn't know what the fractions were; I was only worried where Ron (Pierce, the driver of favorite Classic Photo) was. I've never used the whip on this horse, but the second time I tapped him I knew it was over. 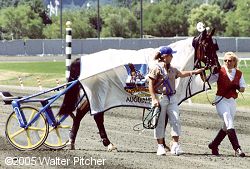 Vivid Photo parades for the fans in his Hambletonian winner's blanket. 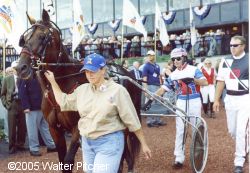 Second place finisher and beaten favorite Classic Photo before the race. His trainer Ervin Miller said, "He raced good but he didn't seem quite as good or safe as he was last week, that was warming up and racing both. The last turn especially he was not taking his strides as good as last week. He wasn't as smooth. It's a pretty firm racetrack maybe that was biting him a little. He's as honest as they come. You always want to win but we are having a great year. I'll take him home. After this he has the American National next." 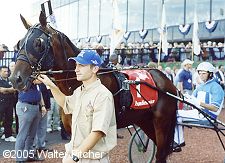 Third place finisher Muscle Memory heads out from the paddock to the track. His driver Cat Manzi said, "Everything went perfect, I just couldn't quite finish. I didn't have a real plan going in to it I just wanted to go forward and go from there. Everything worked out fine. I had my chance."

The $750,000 Hambletonian Oaks for 3-year-old fillies was also contested on Saturday afternoon. 2-1 favorite Blur took over the lead on the backstretch, getting the half in 56 3/5, and 3/4 in 1:25 1/5. With a furlong to go she was 3 lengths clear, but 9-1 shot Jalopy was closing with every stride. The two hit the line together, with Jalopy getting the victory by a nose in 1:53 4/5. It was 3/4 length back to 3-1 second choice Flawless Bluestone in third. 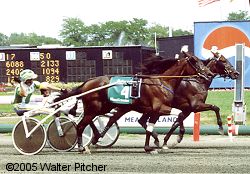 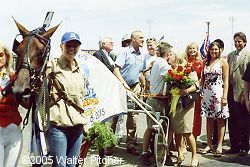 The happy connections in the winner's circle. Trainer Jonas Czernyson said, "We kind of got our hopes up last week when she won the elim. We felt we had a chance. We hoped to get out good, get a position and see what happens. I didn't watch the first half; I was too nervous. I picked it up at the half and when they came around the turn. I thought she would get up for second. I never thought she'd get up to win."