The $1.5 million Hambletonian is the richest harness race in North America, featuring the best 3-year-old trotters on the continent contesting the standard 1 mile distance at the Meadowlands Racetrack in New Jersey. The crowd of 25,006 enjoyed a warm afternoon on Hambletonian Day, however, rains fell early on the day which rendered the track "good" for the stakes races. A field of ten lined up behind the starter, with Deweycheatumnhowe sent off as the 2-5 favorite, undefeated in 14 career starts including a runaway victory in his elimination heat last week. In to challenge the Ray Schnittker stable star include 7-2 second choice Crazed, winner of his elimination in a lifetime best 1:52 2/5, and 11-1 third choice Clerk Magistrate, winner of the Goodtimes Stakes at Mohawk in June and second behind Crazed in his elimination heat.

At the start, driver-trainer and co-owner Ray Schnittker in the bike behind Deweycheatumnhowe immediately hustled the heavy favorite to the lead, taking advantage of the inside post position. 75-1 outsider Velocity Hall and second choice Crazed stalked him the whole way through fractions of 26 4/5, 55 seconds, and 1:23 2/5. At the top of the stretch, Velocity Hall tired and dropped from contention, allowing Deweycheatumnhowe to open up a 1 1/2 length advantage over Crazed at the 1/8 pole. Driver Tim Tetrick moved Crazed out wide for room and the second choice put in a good rally to close the gap on the favorite, but Deweycheatumnhowe held him off in the final strides to prevail by 1/2 a length in a time of 1:52. It was another 2 3/4 lengths back to 47-1 Make It Happen third. 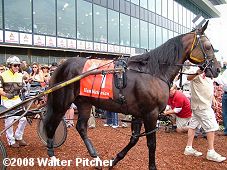 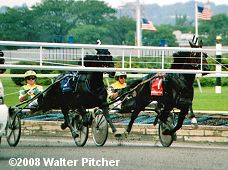 Left: Deweycheatumnhowe heads out to the track before the race.

Right: At the start of the Hambletonian with Deweycheatumnhowe (#1) and Crazed (#2). Winning driver, trainer, and co-owner of Deweycheatumnhowe, Ray Schnittker, said, "I don't think the front end was that great today, 26 4/5. I actually thought he might be getting beat halfway down the lane. He dug deep. He just dug in and refused to let (Crazed) get by. I guess an old dog has a hard time learning new tricks. I said, OK, if we get beat we get beat, but I'm going to do what's worked best for me. I was trying to back into Dave (Miller and Velocity Hall) as much as I could. I knew he didn't have much stock and was just trying to keep Crazed from having a fresh shot at me, keep him as long as I could. About a quarter of the way down the lane, we were trying for all we could go. (Crazed) was coming; it was a dogfight. I would have rather won by eight. I have a lot of great partners and a lot of great owners. I had a lot of people pulling for me and wishing me luck - drivers, race secretaries, judges - it was really surprising. We'll go to the World Trotting Derby (in Du Quoin, IL), and then up to Canada (for the Canadian Trotting Classic) and Kentucky (for the Kentucky Futurity), and if he's still sound he's going to go to the Breeders Crown."

Deweycheatumnhowe is named after a Three Stooges skit about a trio of shiester lawyers. They have this poster hanging in his barn. 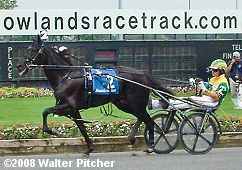 Second place finisher Crazed in the post parade. The 7-2 second choice sat behind the pacesetting favorite the whole way with regular driver Tim Tetrick, and closed well in the final furlong to finish just 1/2 a length behind. The Frank Antonacci trained son of Credit Winner improved his record to 5 wins, 1 second, and 1 third in eleven starts for owner Lindy Racing Stable. Tetrick said, "He is the real dream; he is fast and can go with the big boys. We get to be in the dance. (Deweycheatumnhowe) is a great animal and even if you race second, that's not bad compared to Dewey. This is lots of fun, especially at our ages. He's (trainer Frank Antonacci) 24 and I'm 26; the young guns are here." 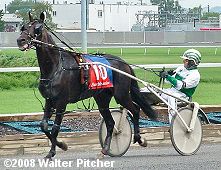 Second place finisher Make It Happen in the post parade. The 47-1 outsider raced in 8th most of the way with driver Daniel Dube in the sulky, then passed tiring horses in the stretch to get third, beaten 3 1/4 lengths at the line. Make it Happen was one of two Ray Schnittker-trained horses in the Hambletonian, the other being Deweycheatumnhowe. He improved his record to 6 wins, 5 seconds, and 5 thirds in 23 starts for owner Eat My Dust Stable. Until this race, his best performance was finishing second by a nose in the Yonkers Trot.

The main event of the Hambletonian undercard was the $750,000 Hambletonian Oaks for 3-year-old trotting fillies, with a field of 10 lining up behind the gate. Lantern Kronos was sent off as the 3-5 favorite over 7-2 second choice Stage Show and 12-1 No Pain No Gain.

48-1 Diana Hall set the early pace while being stalked by 13-1 Creamy Mimi down the backstretch, through fractions of 27 3/5, 56 3/5, and 1:25 3/5. Favorite Lantern Kronos sat back in seventh early, very wide most of the way. In mid-stretch, Creamy Mimi closed on the outside to take over the lead as Diana Hall tired and faded to finish fourth. Lantern Kronos closed on the far outside but was left with too much ground to make up, as Creamy Mimi cruised under the line 1 1/4 lengths in front, in a time of 1:53 4/5. It was another 1/4 length back to late-running Stage Show third.

Winning driver Andy Miller said, "The trip worked out perfect; that was what we talked about, getting up close and getting a good trip. My filly was really strong, she felt super and I thought she'd take me to the wire. It's awesome."

Winning trainer Trond Smedshammer added, "Finally! I was second three years in a row and finally got it done. I knew we had a good filly coming in. This was exactly the kind of trip we were looking for. I didn't think she could control the race and win, I didn't think anyone could; it was a matter of a trip."