The $1.5 million Hambletonian at the Meadowlands is the richest harness race in North America and is the first leg of harness racing's Triple Crown for trotters, followed by the Yonkers Trot and the Kentucky Futurity. A crowd of 29,531 watched as a full field of ten 3-year-olds lined up behind the starting gate in the 81st edition of this classic, with Mr. Pine Chip sent off as the 9-10 favorite over 4-1 Chocolatier.

6-1 Here Comes Herbie was parked out on the clubhouse turn but took the lead right away, getting the quarter in 26 4/5 while a length and a half clear of the field. He continued to hold the lead for the backstretch run, with 7-1 Blue Mac Lad stalking him in second, through a half in 54 3/5. Favorite Mr. Pine Chip was wide early on, settling in sixth. Rounding the far turn, Here Comes Herbie still held a 1 1/4 length lead through 3/4 in 1:23 3/5, but the quick pace had taken its toll. He still held the lead at the 1/8 pole but the closers were gaining fast while he was tiring. Glidemaster, double-parked on the far turn after racing eighth down the backstretch, was closing with every stride and passed four horses late to win going away by 1 1/4 lengths over deep closer Chocolatier in a stakes record time of 1:51 1/5 for the mile trot. It was another 1/2 length back to Blue Mac Lad in third. Heavy favorite Mr. Pine Chip put in his rally early in the stretch but in mid-stretch, broke stride and dropped out of contention finishing last. 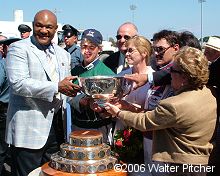 George Foreman presents the trophy to the winning connections. Winning breeder and co-owner George Segal said, "I'm on seventh heaven. We bred them both (Hambletonian winner Glidemaster and Hambletonian Oaks winner Passionate Glide) and couldn't be prouder of everybody. When he got to the top of the stretch, I thought he'd get there. I thought I had a good chance, but I wasn't sure I was going to win. At the beginning of the race, I had doubts. At the top of the stretch, I had no doubts." 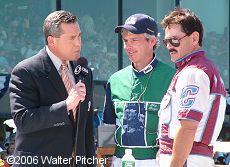 CBS-TV's Gary Seibel (left) interviews winning driver John Campbell (right) and winning trainer Blair Burgess (center). It was the sixth Hambletonian win for Driver John Campbell who said, "I was third over; ideally, you'd like to be second over, but he was close enough and when they bunched up around the last turn, he was full of trot and I knew he was going to pass somebody when I asked him because he was really full of himself at the head of the stretch. It's just amazing what he went through. He had a nail in his foot. They weren't sure if he was going to be able to race last week. The fractions were stiff enough. When I saw the half at 54 3/5, I thought that that was a good enough clip that if my horse delivered what I thought he could do, that he'd be tough to beat." 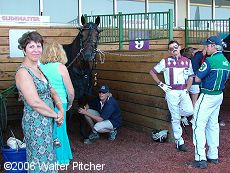 Glidemaster in the paddock before the race with driver John Campbell and trainer Blair Burgess on the right. Burgess said, "I always thought this horse had a really good chance but you never know until the race is run. The trip looked tough most of the way, but around the last turn, it was shaping up. I know a lot of bettors get nervous when they see horses intentionally race off the pace. But very often it's the best thing, it's your best chance to win. John took the best route and it was risky but he had to go that way. I wasn't sure the front-runners were going to come back to us. When they hit the half; they looked pretty confident. It took a big mile; it took a track record mile to go by them." 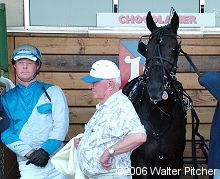 Second place finisher Chocolatier in the paddock with driver D. R. Ackerman on the left. Ackerman said, "I thought my colt was great today. I thought in the last turn that he was in a very good spot. In the last eighth, the other horse sprinted away from me. I didn't leave with him because I didn't feel I had enough speed off the gate, but I followed Glidemaster the whole way and couldn't have gotten a better trip. I still think he's one of the top-five in the game right now and he's still got a lot of the year left to race." 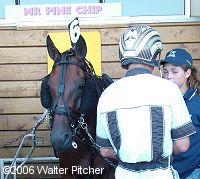 Beaten favorite and last place finisher Mr. Pine Chip in the paddock with driver Brian Sears. Sears said, "They told me he didn't have the best of weeks this week, that maybe he was a little sick and it was just bad timing. He's maybe not as strong today. He's not a big horse and that takes its toll on him."


The female counterpart to the Hambletonian is the $750,000 Hambletonian Oaks. A field of ten 3-year-old trotting fillies went to post, with Passionate Glide sent off as the 2-5 favorite over 4-1 Emantee.

Emantee was quickest at the start and she took the lead on the clubhouse turn through a quarter in 28 seconds, 1 3/4 lengths clear of favorite Passionate Glide. Midway down the backstretch, driver Ron Pierce urged the favorite to the front and she did so, getting the half in 56 2/5 while 1 1/4 lengths ahead of Emantee who settled in a drafting second. Passionate Glide continued to hold the lead around the far turn through 3/4 in 1:27, but Emantee stubbornly battled with her the whole way. Through the stretch, Passionate Glide pulled away to a 1 1/2 length advantage but she was all-out to hold off Emantee at the line by just 3/4 length in a time of 1:54 3/5. It was 3 lengths more back to 18-1 outsider Celebrity Sweedie in third. 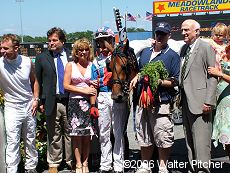 The happy connections in the winner's circle. Winning trainer Jimmy Takter said, "First of all, I want to thank my staff and everybody to be able pull her out of an injury she did three weeks ago. This is quite an important week. For us as trainers, to get these horses ready, it's not an easy job. When you know you have a filly in her category, it would have been a shame if we wouldn't be able to win this race. To pull it off, it's one of my greatest feelings in harness racing."

Winning driver Ron Pierce added, "Last week she was a little shaky but Jimmy (Takter) did a great job of getting the kink out of her. I'm just very, very happy right now. I'm honored to win this race for (owner George Segal). He's one of the greatest owners in the sport and one of the greatest guys I know. There was so much pressure on us to get the job done. I feel like kissing Jimmy but I'm not going to. It's really an honor to win with this filly today. There were no anxious moments. I got a real good breather at the third quarter and I knew that I had to chase her around in the lane to get rid of (Emantee)." 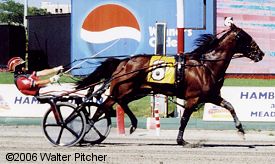 Also on the card was the $195,000 U.S. Pacing Championship where favorite Holborn Hanover won wire-to-wire in a new world record time of 1:46 4/5. Holborn Hanover eclipsed Primetime Bobcat’s 1:47.2 world record set on May 13, 2006 and shattered the track record of 1:47.3, shared by Jenna’s Beach Boy (June 22, 1996) and Lis Mara (July 29, 2006). Winning driver George Brennan said, "I saw the three-quarter split and I gave him his head then and he responded. Normally I don't drive the clock, but I took a shot and I was going for a record. It's just amazing, totally amazing that horses can come home in 26 seconds off of those fractions, but like I said, I know this horse is really good and I know what he’s capable of. He’s a great horse."
Photo Finish Strip
Results Chart

On to the other stakes on the card - the Golden Girls, Mistletoe Shalee, Nat Ray, Oliver Wendell Holmes (2 divisions), and the other division of the U.S. Pacing Derby