The $100,000 Gravesend Handicap (G3) is the final graded stakes of the year in New York. The track was rated "muddy" early in the card but was upgraded to "good" an hour before the stakes race. However, half of the originally drawn field of eight older horses scratched from the race, leaving just four to contest this 6 furlong trip over the inner dirt track at Aqueduct before a live audience of just 3,595. Fabulous Strike, winner of the Fall Highweight last time out after finishing fifth in the Breeders' Cup Sprint and second in the Vosburgh, was sent off as the 1-2 favorite. In to challenge the son of Smart Strike included 2-1 second choice Lucky Island, winner of the Bold Ruler and Tom Fool earlier in the year but entering this race off two straight 6th place finishes, in the Forego and the Vosburgh. 9-2 third choice True Quality and 12-1 Good Card, both exiting allowance wins, completed the field.

Jockey C.C. Lopez sent True Quality to the lead soon after the start and he was allowed an uncontested lead of as many as 3 lengths through an opening quarter in 22.28 and a half in 45.24. Fabulous Strike and jockey Ramon Dominguez sat in second, himself 2 lengths ahead of Lucky Island and Good Card at the back of the field. Turning for home, True Quality continued to hold onto the lead, getting 5/8 in 57.23 but began to tire in the final furlong. Fabulous Strike unleashed his rally from the 3/16 pole, quickly closing the gap and running down the pacesetter at the 1/16 pole to win going away by 1 3/4 lengths in 1:09.74 over the good track. It was a long 3 1/2 lengths back to Good Card third, and another 1 1/4 lengths to Lucky Island last. 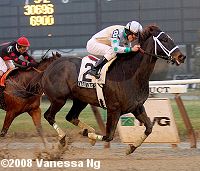 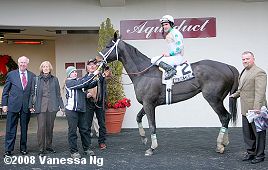 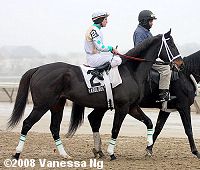 Right: Fabulous Strike heads out for the post parade. His trainer Todd Beattie said, "I thought rating was always a possibility with him. Today I just let Ramon make the decision. He didn't have a smooth training schedule in between his last race and today. I moved him from Penn National to my brother-in-law's barn at Laurel (because of the track condition). He actually lost some training, which hurt him. We'll go back to Penn National and make a decision in four or five days. I would like to go to Dubai (Golden Shaheen) with him. We'll see if this is enough to get him there." 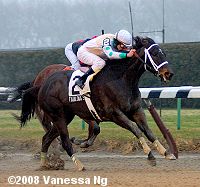 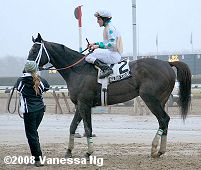 Right: Fabulous Strike returns after the race. His jockey Ramon Dominguez said, "I was planning on going to the lead, especially with the inside post. But the horse that C.C. (Lopez) was on (True Quality) was very quick out of the gate and after a few jumps I took hold. Down the lane, he finished up nice. He's a push-button kind of horse." 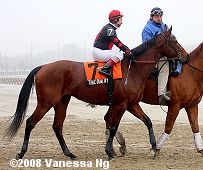 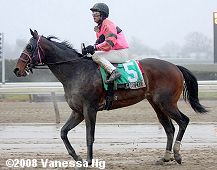 Left: Second place finisher True Quality in the post parade. The 9-2 third choice outhustled the favorite for the lead and opened up by 3 into the homestretch under jockey C.C. Lopez, but tired late allowing Fabulous Strike to pass him in the final furlong to finish second beaten 1 3/4 lengths at the line. The John Campo Jr. trained son of Elusive Quality improved his record to 3 wins,1 second, an 3 thirds in 8 starts, earning $146,722 for owner Paraneck Stable.

Right: Third place finisher Good Card returns after the race. The 12-1 longest shot raced three wide at the tail end of the field under jockey Javier Castellano as many as 6 1/2 lengths off the pace, then passed the tiring Lucky Island at the 3/16 pole to get second, beaten 5 1/4 lengths. The Patrick Kelly trained son of Good and Tough improved his record to 4 wins, 5 seconds, and 5 thirds in 24 starts, earning $230,054 for owner-breeder Thomas J. Kelly.