The richest races on the continent this weekend were run on Saturday at Parx Racing with two $1 million events run at the Bensalem, Pennsylvania oval. Conditions were excellent, with sunny skies and temperatures near 70, with the main track fast and the turf good.

The co-feature race on Saturday was the $1 million Cotillion Stakes (G1), with a field of eight 3-year-old fillies going 1 1/16 miles on the main track. As expected Monomoy Girl was sent off as the 1-2 favorite, winner of 5 straight including the Kentucky Oaks (G1), Acorn (G1), and Coaching Club American Oaks (G1). In to challenge her included 4-1 second choice Midnight Bisou, third in the Alabama (G1), and 9-2 third choice Separationofpowers, winner of the Test (G1).

Jockey Albin Jimenez sent 153-1 longest shot Jump Ruler to the lead first time by through fractions of 24.08 and 48.63 while pressed by Monomoy Girl and Separationofpowers. On the far turn, jockey Florent Geroux sent Monomoy Girl to the front through 3/4 in 1:13.12 and she opened up a 1 1/2 length lead midstretch through 1 mile in 1:39.16. Midnight Bisou, 6th early under Mike Smith, came out for room and put in a strong rally. Monomoy Girl drifted out into Midnight Bisou inside the 1/16 pole, with Monomoy Girl finishing a neck in front in 1:45.95. Smith claimed foul against Geroux for interference in the stretch, and the stewards allowed the claim, disqualifying Monomoy Girl and placing her second, handing the victory to Midnight Bisou.

Also on the card was the Pennsylvania Derby (G1) won by McKinzie. 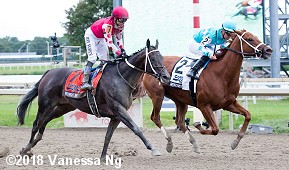 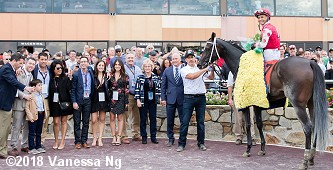 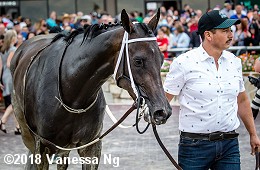 Left: Midnight Bisou in the winner's circle. Scott Blasi, assistant to winning trainer Steve Asmussen said, "We were just so happy with her coming out of the Saratoga meet with five-weeks rest, we thought she came in here really fresh and on her game. Tough to win like this, lose like that, we've all been there, but that being said she deserved to win the race. She's an extremely gutty filly and shows up every time. We are just so proud to have her in our barn and she stepped up and has a great constitution and definitely ran her best race."

Right: Midnight Bisou heads back to the barn after the race. 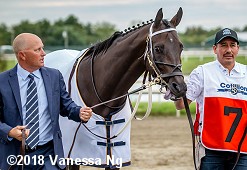 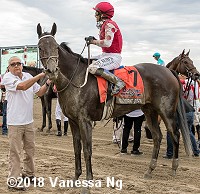 Left: Midnight Bisou in the paddock before the race.

Right: Midnight Bisou returns after the race. Winning jockey Mike Smith said, "(Monomoy Girl) is just a brilliant filly but my mare deserves a fair chance and I don't think she got one. I went ahead and went in because everybody was going out, I was going straight as an arrow to stay in my path but she choose to come over and take it from me so I choose the outer route and probably would not have been a DQ if (Florent Geroux) would have stayed straight at that point but he came out again and we wound up in the eight-nine path I never got a straight run and we got beat only by a head. You got to do what you got to do." 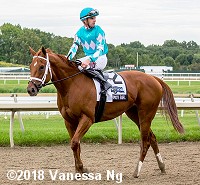 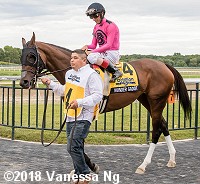 Left: Second place finisher (by DQ) and beaten favorite Monomoy Girl returns after the race. Jockey Florent Geroux said, "It was close. She wandered around when she made the lead. I don't know (if it was the right call). I am not the stewards. It is disappointing. This was a million dollar race, a Grade 1. I thought our filly was the best today."

Right: Third place finisher Wonder Gadot in the paddock before the race. The Mark Casse trainee improved her record to 5 wins, 4 seconds, and 4 thirds in 15 starts, earning $1,492,461 for owner Gary Barber.

Jockey Emisael Jaramillo sent Aztec Sense to the front through fractions of 24.40, 48.66 and 1:13.33 while pressed by 9-1 Zanotti and stalked by Collected. Entering the stretch, Collected tired as Aztec Sense opened up on the field, drawing off late to win by 4 lengths over Zanotti in 1:45.97. It was another 1/2 length back to Name Changer third, and 2 1/4 more to favorite Collected fourth. 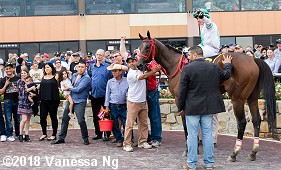 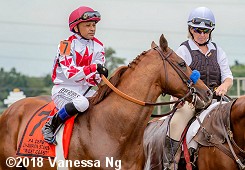 Left: Aztec Sense heads to the winner's circle. Winning trainer Jorge Navarro said, "We have never gotten to the bottom of this horse, and today we did. He is a nice horse."

Right: Fourth place finisher and beaten favorite Collected in the post parade. Jockey Mike Smith said, "I had no horse, man. I don't know if he was ready to run that hard. I have no excuse. (I was in trouble) at the half mile pole."


Kicking off the stakes action was the $100,000 Alphabet Soup Stakes for older Pennsylvania-breds going 1 1/16 miles on the turf. Leematt Stakes runner-up Fast and Accurate was the 9-10 favorite in the field of 9 over 9-2 Bern' James Bern and 13-2 Missin the Big Dog. 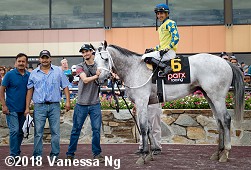 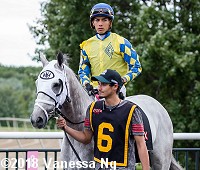 Left: Fast and Accurate in the winner's circle. Winning jockey Jose Ortiz said, "It was perfect. I just let him relax on the first turn. When he made the lead, he kind of stopped running a little bit. When he felt (Bern' James Bern) to the outside of him, he dug in with him. I knew he was a nice horse and he fit in good with these. I just tried to see when he ran well, how he was doing, and just try to put him right where it counted."

Right: Fast and Accurate in the paddock.