The highlight of the Parx Racing season is Pennsylvania Derby (G1) and Cotillion (G1) day, this year taking place on Saturday September 22. Conditions were excellent during training hours, with overcast skies on Friday and temperatures near 70. The Derby features some of the best 3-year-olds of the east going 1 1/8 miles on the main track, while the Cotillion is its distaff counterpart, for 3-year-old fillies going 1 1/16 miles, and both races have $1 million purses. The undercard includes the $300,000 Gallant Bob (G3) for three-year-old sprinters at 6 furlongs, the $150,000 Pennsylvania Derby Champion Stakes for older horses at 1 1/16 miles, and the $100,000 Alphabet Soup Stakes for older horses at 1 1/16 miles on the turf.

Entries for Saturday from Equibase.
More photos from Wednesday and Thursday at Parx 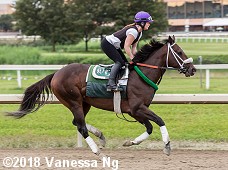 Bravazo gallops Friday morning at Parx. The Preakness (G1) runner-up comes here off a 3rd place finish in the Travers Stakes (G1). At 6-1 morning line, regular rider Luis Saez will be in the irons in the Derby from the outside post 10. 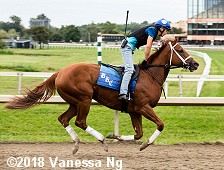 Monomoy Girl gallops on Friday morning at Parx. She is the heavy favorite for the Cotillion at odds of 3-5 morning line with regular jockey Florent Geroux aboard and breaking from post 2. 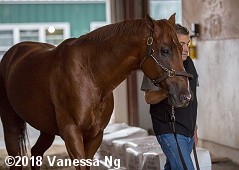 Collected with assistant trainer Jimmy Barnes at Parx on Friday morning. He is the 6-5 morning line favorite in the Pennsylvania Derby Champion Stakes. Runner-up in the Breeders' Cup Classic (G1), he has not raced since finishing 7th in the Pegasus World Cup (G1). Regular rider Mike Smith gets the call for Bob Baffert out of post 7. 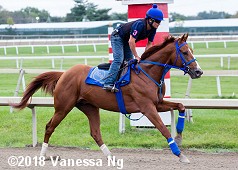 First Mondays gallops at Parx on Friday morning. John Servis trains the Maryland-bred colt who last finished third in the Smarty Jones Stakes (G3) at Parx. He will break from post 1 in the Derby a odds of 15-1. 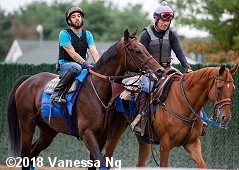 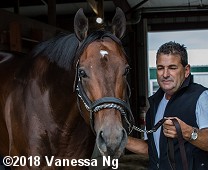 McKinzie at Parx on Friday morning. Regular rider Mike Smith gets the call for Baffert in post 8 aboard the 5-2 morning line favorite in the Derby. He won the Sham (G3) and the San Felipe (G2) before being taken off the Triple Crown trail, and is making his first start after the 6 month layoff. 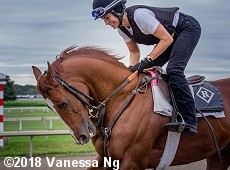 Mr Freeze gallops on Friday morning at Parx. Dale Romans trains the 12-1 shot who will break from post 7 in the Derby with Robby Albarado aboard. 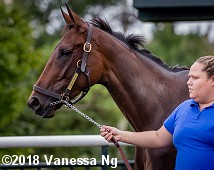 Chocolate Martini schools at Parx on Friday. She comes to Philadelphia off third place finishes in the Summertime Oaks (G2) at Santa Anita and the Coaching Club American Oaks (G1) at Saratoga. The 12-1 shot in the Cotillion will have Irad Ortiz Jr. aboard for trainer Tom Amoss. 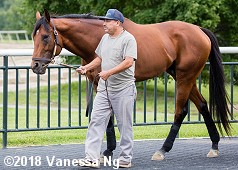 Core Beliefs schools at Parx on Friday afternoon. Joe Talamo will be aboard the Peter Eurton trainee in the Derby. He drew post 5 and is 10-1 on the morning line. 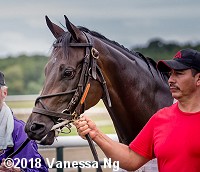 Midnight Bisou schools at Parx on Friday. Trainer Steve Asmussen said, "She's a very special filly, and I think the mile and a sixteenth under the circumstances at Parx will be ideal for her." The 5-1 second choice in the Cotillion drew post 7 and will have regular rider Mike Smith aboard. 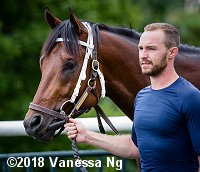 Axelrod schools on Friday afternoon at Parx. He drew post 6 for the Derby and will have Joe Bravo aboard and is third choice at morning-line odds of 5-1. 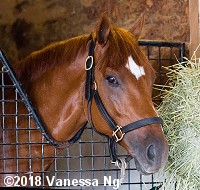 Hofburg in his stall Friday afternoon at Parx. The Bill Mott trainee is second choice at 5-1 on the morning-line and will break from post 2 under jockey Irad Ortiz Jr.