The highlight of the Parx Racing season is Pennsylvania Derby (G1) and Cotillion (G1) day, this year taking place on Saturday September 22. Conditions were excellent during training hours, with clear skies on Wednesday and overcast on Thursday and temperatures near 70. The Derby features some of the best 3-year-olds of the east going 1 1/8 miles on the main track, while the Cotillion is its distaff counterpart, for 3-year-old fillies going 1 1/16 miles, and both races have $1 million purses. The undercard includes the $300,000 Gallant Bob (G3) for three-year-old sprinters at 6 furlongs, the $150,000 Pennsylvania Derby Champion Stakes for older horses at 1 1/16 miles, and the $100,000 Alphabet Soup Stakes for older horses at 1 1/16 miles on the turf.

Entries for Saturday from Equibase.
More photos from Friday at Parx 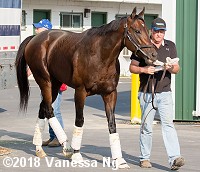 McKinzie arrives at Parx on Wednesday afternoon. Trainer Bob Baffert said, "He was my Derby horse. And then he fumbled the ball, and Justify picked it up and ran it all the way in. He had a good backup. The thing about him is he's a gutsy horse. He digs deep, he fights. If it comes down to two horses, he wins those photos." 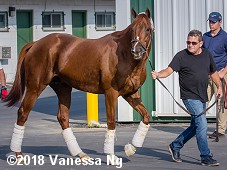 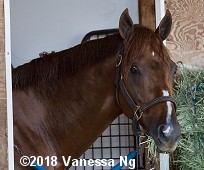 Collected arrives at Parx on Wednesday afternoon. He is the 6-5 morning line favorite in the Pennsylvania Derby Champion Stakes. Runner-up in the Breeders' Cup Classic (G1), he has not raced since finishing 7th in the Pegasus World Cup (G1). Regular rider Mike Smith gets the call for Bob Baffert out of post 7. 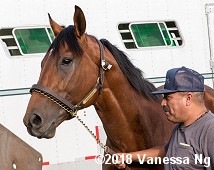 Core Beliefs arrives at Parx on Wednesday afternoon. Trainer Peter Eurton said, "He seems like he’s doing real well. His last few works have been spot on. Hopefully he likes the racetrack. I know there's been a lot of rain there. It's a talented field, but what do you expect for one million dollars right?" Eurton added this will be his final start in 2018. "He's going to get a little break after this race and then get ready for next year." Joe Talamo, who ride him to victory in the Ohio Derby (G3), gets the call in the Derby aboard the 10-1 shot in post 5. 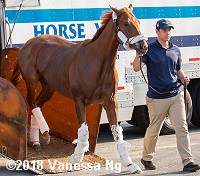 Monomoy Girl arrives at Parx on Wednesday afternoon. Trainer Brad Cox said, "I think she's ready to run; she acts like it. She looks fantastic. The color of her coat is great, her weight's great. As far as the calendar goes and the way the races fell for the 3-year-old fillies, I just felt it made sense to skip the Alabama and the distance and it set us up well for this race and hopefully on to the Breeders' Cup." At prohibitive odds of 3-5 morning line, regular jockey Florent Geroux gets the assignment again, drawing post 2 in the Cotillion. 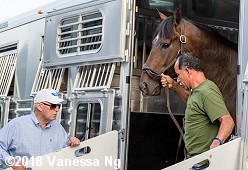 Trainer D. Wayne Lukas supervises as Bravazo gets off the van at Parx on Wednesday afternoon. Lukas said, "I look for him to run a bang-up race, but I don't by any means think this is an easy race for him. It's very competitive. It turned out tough, but every time you put up a million dollars, they'll show up. I have great respect for the Baffert horse even though he hasn't run, because Bob is not going to send a horse across the country if he's not ready to run. He's got some seven-eighths works in him, and I think he's probably the horse to beat. We'll be tough, we'll keep them honest. He earns a check every time. Maybe our number is coming up." 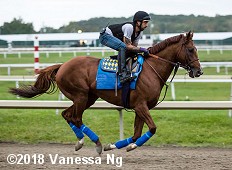 Collected gallops on Thursday morning at Parx. He is the 6-5 morning line favorite in the Pennsylvania Derby Champion Stakes. Runner-up in the Breeders' Cup Classic (G1), he has not raced since finishing 7th in the Pegasus World Cup (G1). Regular rider Mike Smith gets the call for Bob Baffert out of post 7. 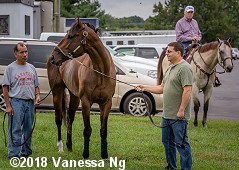 Bravazo on Thursday morning at Parx with trainer D. Wayne Lukas looking on. The Preakness (G1) runner-up comes here off a 3rd place finish in the Travers Stakes (G1). At 6-1 morning line, regular rider Luis Saez will be in the irons in the Derby from the outside post 10. 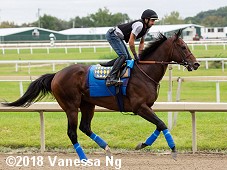 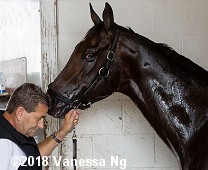 McKinzie gallops on Thursday morning at Parx then gets a bath with assistant trainer Jimmy Barnes. Regular rider Mike Smith gets the call for Baffert in post 8 aboard the 5-2 morning line favorite in the Derby. He won the Sham (G3) and the San Felipe (G2) before being taken off the Triple Crown trail, and is making his first start after the 6 month layoff. 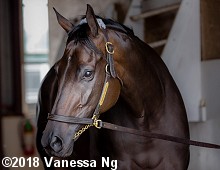 Midnight Bisou at Parx on Thursday. Trainer Steve Asmussen said, “She’s an unbelievably straightforward filly. Very kind, very agreeable. Couldn’t have been any easier. She was in great physical and mental shape when we got her, and her consistency is amazing in terms of her attitude, her appetite, disposition. Everything. She’s a very special filly, and I think the mile and a sixteenth under the circumstances at Parx will be ideal for her.” The 5-1 second choice in the Cotillion drew post 7 and will have regular rider Mike Smith aboard. 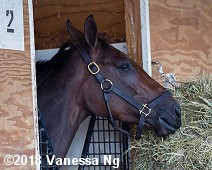 Chocolate Martini in her stall at Parx on Thursday. She comes to Philadelphia off third place finishes in the Summertime Oaks (G2) at Santa Anita and the Coaching Club American Oaks (G1) at Saratoga. The 12-1 shot in the Cotillion will have Irad Ortiz Jr. aboard for trainer Tom Amoss.