With just 3 weeks remaining in the Woodbine Thoroughbred season, there are few stakes opportunities left as many of the top stables have begun to ship south for the winter. The $175,000 Kennedy Road Stakes (G2) featured some of the top older male sprinters in Canada going 6 furlongs over the Tapeta main track. Conditions were typical for late November at the Toronto oval, with partly cloudy skies and a race time temperature of 3 C (37 F) As expected, Pink Lloyd was sent off as the 3-4 favorite in the field of 8, off his 4th place finish in the Bold Venture (G3) where he was declared a non-starter, after winning 5 straight including the Vigil (G3) and Jacques Cartier (G3). In to challenge him included 3-1 second choice Richiesinthehouse, an allowance winner last out after finishing a close 3rd in the Nearctic (G2), and 4-1 third choice Extravagant Kid, 5th in the Woodford (G2) at Keeenland after winning the Da Hoss at Colonial.

Jockey Patrick Husbands sent Richiesinthehouse to the lead exiting the chute and he set fractions of 22.61 and 45.21 while pressed by 33-1 O'Kratos and stalked by 42-1 Eskiminzi and 13-1 Reconfigure. On the far turn, Pink Lloyd, last early under regular rider Eurico Rosa da Silva, came out 5 wide to circle the field, taking over at the 1/16 pole through 5f in 57.03. Kept to task by Da Silva, Pink Lloyd easily held off late-running Extravagant Kid to win by 1 1/4 lengths in 1:08.72, just 0.67 seconds off his own track record set in April 2018. It was another 1 1/4 lengths back to 49-1 longest shot Malibu Secret third. 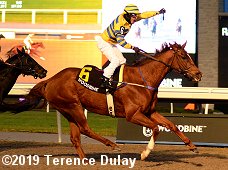 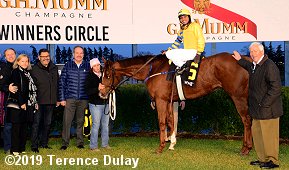 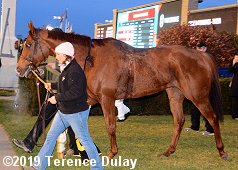 Left: Pink Lloyd in the winner's circle. Winning trainer Bob Tiller said, "This all boils down to teamwork. There'll never be another one like this horse. My owners have been terrific. They were willing to wait. I felt after his last race he needed a rest, he got it and we had a couple interruptions in between – they were very hard on my grey hair and made it even greyer – but, you know what, this is 19 stakes out of 22 wins so that's pretty amazing, and it seems like it ain't over yet. We're really blessed to have him."

Right: Pink Lloyd heads back to the barn. 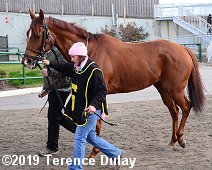 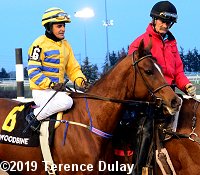 Left: Pink Lloyd walks over before the race.

Right: Pink Lloyd in the post parade. Winning jockey Eurico Rosa da Silva, who will be retiring at the end of the meet, said,  "I want to thank this horse for all the good feelings he gave me. Yesterday was not easy for me and today was a tough time because I know it was my last time riding him. All I can say is I've never had so much great feelings from a horse like I did with him. And you see today, there was so much traffic in front of me, I just took him back and I said, 'Boy, we need to go outside.' I went probably six-wide in the turn. You know, there's only one horse that can do it, his name is Pink Lloyd. I learned so much from this guy (Tiller)." 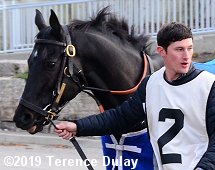 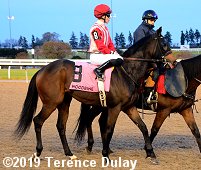 Left: Second place finisher Extravagant Kid walks over before the race. The 4-1 third choice sat 4th early under Rafael Hernandez, led briefly but could not hold off the winner. The Brendan Walsh trainee improved his record to 11 win, 11 seconds, and 6 thirds in 38 starts, earning $66,214 for owner DARRS Inc.

Right: Third place finisher Malibu Secret in the post parade. The 49-1 longshot was 6th early under Emma-Jayne Wilson and rallied to get third beaten 2 1/2 lengths. The Martin Drexler trainee improved his record to 3 wins, 6 seconds, and 4 thirds in 21 starts, earning $218,189 for owners 1569389 Ontario Inc. and Bruno Schickedanz.

The $225,000 Coronation Futurity is the premier race for Canadian-foaled 2-year-olds, and usually influences voting for the Sovereign Awards in the 2-year-old male category as well as determines the early favorite for next year's Queen's Plate and Canadian Triple Crown, playing a similar role as the Breeders' Cup Juvenile (G1) does for the Kentucky Derby. A field of eight went to post for the 116th renewal of this 1 1/8 mile Tapeta main track test. Cup and Saucer Stakes winner Muskoka Gold was sent off as the 9-5 favorite off his close second in the Grey Stakes (G3). In to challenge him included 3-1 second choice Halo Again, off his debut win at Churchill Downs, and 7-2 third choice Pleasecallmeback, 2nd in the Cup and Saucer after finishing 5th in the Summer Stakes (G1).

Jockey Emma-Jayne Wilson sent 30-1 longest shot Green Growth to the lead first time by and he set slow fractions of 25.29, 50.15, and 1:14.76 while pressed by 10-1 Tomcat Black and stalked by Halo Again. Turning for home, Green Growth continued to lead through 1 mile in 1:39.51 before tiring. Halo Again, confidently ridden by Rafael Hernandez, came through on the rail to gain the lead inside the 1/16 pole and was all out to hold off deep closing 7-1 Malibu Mambo by a head in 1:51.82. It was another 3/4 lengths back to favorite Muskoka Gold third. 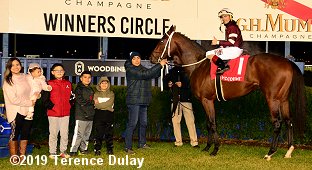 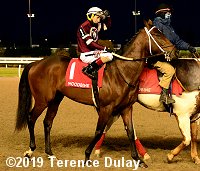 Left: Halo Again in the winner's circle. Winning jockey Rafael Hernandez said, "Actually (I didn't know) too much (about the horse), but he looks like a professional horse, he gave me a little pull (down the backstretch). he started picking it up at the 3/8 pole and got into the race. When they turned for home he was just pushing ahead. He's a nice horse, thanks to Steve Asmussen for bringing the horse here and giving me an opportunity to ride him. I did my best and he showed he's great. First time on Tapeta and he found another gear, he gave me a hard time earlier but he finally made a kick in the stretch." 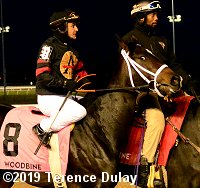 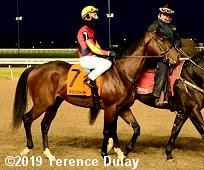 Right: Third place finisher and beaten favorite Muskoka Gold in the post parade. The 9-5 choice was 7th early under Jerome Lermyte then rallied to get third beaten 3/4 length. The Mark Casse trainee improved his record to 1 win, 2 seconds, and 1 third in 4 starts, earning $155,587 for owner Conrad Farms.

The horses break from the gate for the Coronation Futurity.