Breeders' Cup Challenge "Win and You're In" weekend at Woodbine concluded on Sunday with two Grade 1 races for 2-year-olds on the turf, each contested at 1 mile around 1 turn of the E.P. Taylor Turf Course. Heavy rains fell earlier in the day and intermittent showers fell during the race card, leaving the Taylor course good-to-firm GoingStick reading of 9.6), however the new inner turf course with its superior drainage system remained firm (GoingStick 11.3), with dark overcast conditions and a temperature of 16 C (61 F). Due to the wet conditions all horses including stakes starters were saddled indoors and were not paraded through the walking ring before post parades.

A field of 10 two-year-old males contested the $250,000 Summer Stakes (G1) looking for automatic entry into the Breeders' Cup Juvenile Turf at Santa Anita on November 1. Mystic Lancelot was sent off as the 2-1 favorite off his debut win by 3 lengths over the Saratoga lawn on August 15. In to challenge him included 5-2 second choice Decorated Invader, off his maiden win at Saratoga in his second start, and 7-2 third choice Keep On Truckin, the main local hope, undefeated in 2 starts including the Clarendon last out.

Jockey Pablo Morales sent 109-1 longest shot Cadet Connelly to the front and he set fractons of 24.26, 48.43, and 1:13.08 while pressed by 12-1 Pleasecallmeback and stalked by Mystic Lancelot. Turning for home, Mystic Lancelot tired as Cadet Connelly continued to lead through 7f in 1:24.22. Decorated Invader, 7th early under Irad Ortiz Jr., came out 3 wide for room and rallied to win going away by 1 3/4 lengths under a hand ride in 1:36.34. It was a head back to late-running 13-2 Vitalogy third, while favorite Mystic Landelot checked in 9th. 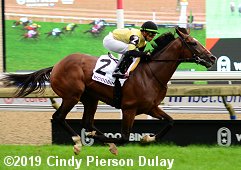 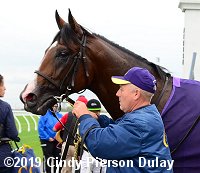 Left: Decorated Invader in the winner's circle. Winning jockey Irad Ortiz Jr. said, "We were just looking for him to relax in the first part of the race and then let him run in the end. We know he can run so we just want to relax him and teach him the first part. He's only had three races so I think he's getting better and better. Today, I really liked the way he did it. He was floating in a little bit in the stretch, he always does, but hopefully he learns and if he just keeps a little more straight in the stretch that would be great. He keeps learning."

Right: Decorated Invader heads back to the barn. Christophe Lorieul, assistant to winning trainer Christophe Clement said, "I know he broke a touch poorly but with the rain we had and everything, I was pretty comfortable he was moving well and was happy where he was. We were just very confident with our ride. He was just biding his time, and he showed up today. (Breeders' Cup) would be the obvious next target for him. Today was the big test, and he completed it so we're very happy for the partnership of West Point." 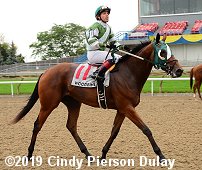 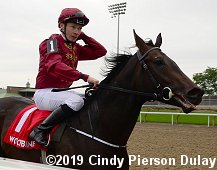 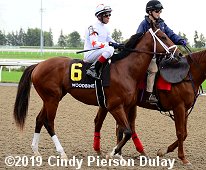 Ninth place finisher and beaten favorite Mystic Lancelot in the post parade. The Todd Pletcher trainee has a record of 1 win, 0 seconds, and 0 thirds in 2 starts, earning $49,801 for owner Phoenix Thoroughbred III.


A field of 7 two-year-old fillies contested the $250,000 Natalma Stakes (G1), with the winner earning a berth in the Breeders' Cup Juvenile Fillies Turf. Fair Maiden was sent off as the 3-5 favorite off her win in the Catch a Glimpse Stakes, the main local prep for this event. In to challenge her included 9-2 second choice Walk in Marrakesh, third in the Prix du Calvados (G2) at Deauville, and 5-1 third choice Secret Stash, a maiden winner at second asking last out at Bellewstown.

Jockey Jamie Spencer sent Walk in Marrakesh to the lead and she set fractions of 23.99, 48.24, and 1:12.56 while pressed by 9-1 fourth choice Abscond and stalked by Fair Maiden. Turning for home, jockey Irad Ortiz Jr. sent Abscond up to challenge, hooking the pacesetter at the 3/16 pole through 7f in 1:24.00. The pair dueled to the line with Abscond prevailing by a nose in 1:36.51. It was a neck back to Fair Maiden third. 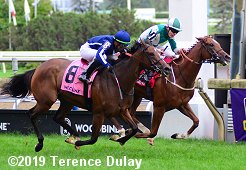 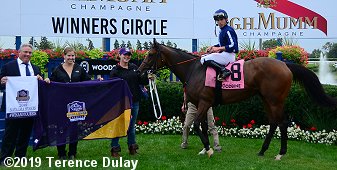 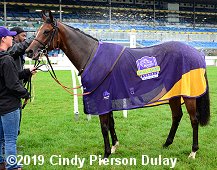 Left: Abscond in the winner's circle. Winning jockey Irad Ortiz Jr., who won both Grade 1 races on Sunday, said, "Kelly told me she's a nice filly, she probably needed a little more ground last time. She was acting really good, she broke out of there and she broke sharp and just stayed in the middle of the turf course and she was relaxed. She was going relaxed in the middle of the track so I left her there, I didn't fight too much with her. And then by the time I start saving some ground in the turn and when I asked her to go, she's a fighter. She fought with the outside horse and came back on the inside. She fought back and she put a head in front in the last couple of jumps. Everything worked out good for us."

Right: Abscond gets hosed off after the race. Kelly Wheeler, assistant to winning trainer Eddie Kenneally said, "I'm really impressed with her. She's done everything right since she broke her maiden. Really, we've asked a lot of her shipping her up to Saratoga – she handled that great. So we shipped her up here, it looked like a good spot, and she came through. I guess (Breeders' Cup) is up to Eddie and the owner. She'll tell us, how she comes out of the race. She'll ship back to Kentucky and we'll go from there." 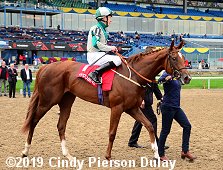 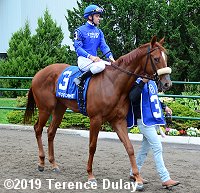 Left: Second place finisher Walk in Marrakesh returns after the race. The Mark Johnston trainee improved her record to 3 wins, 2 seconds, and 1 third in 6 starts, earning $87,135 for owner-breeder Merriebelle Stable.

Right: Third place finisher and beaten favorite Fair Maiden heads to the track before the race. The Eoin harty trainee improved her record to 2 wins, 1 second, and 1 third in 4 starts, earning $89,904 for owner-breeder Godolphin. 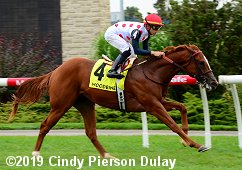 Kicking off the stakes quartet on Saturday was the $100,000 Ontario Racing Stakes for 2-year-olds sprinting 5 furlongs on the inner turf course. Old Chestnut was sent off as the 5-4 favorite in the field of 7 over 2-1 Aye Aye Sir and 7-1 Divided Sky.

Jockey Tyler Gaffalione sent Old Chestnut to the lead down the back through an opening quarter of 21.77 while pressed by Aye Aye Sir and stalked by 15-2 Barilko and 9-1 Clear Destination. Turning for home Old Chestnut left the field behind, opening up a 1 1/2 length lead through a half in 45.24. Kept to task by Gaffalione, Old Chestnut drew off late to win by 3 3/4 lengths over Barilko in 56.85. It was another length back to Aye Aye Sir third. 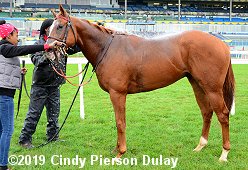 Left: Old Chestnut in the winner's circle. Winning trainer Mark Casse said, "I thought about (the Summer Stakes) for a little bit, and then thought maybe go here and then go to Keeneland (Indian Summer Stakes). We won it last year with Strike Silver. That's what kind of swayed my decision to come here. We'd go here, and then hopefully with a good performance there, he'd go to the Breeders' Cup."

Right: Old Chestnut gets hosed off after the race. Winning jockey Tyler Gaffalione said, "He has so much power. He's a very kind horse, very smart. He shot right out, and took care of business." 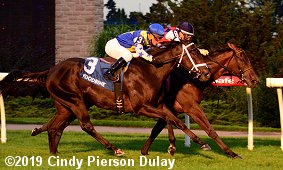 Closing out this big weekend of racing was the $100,000 Woodbine Cares Stakes for 2-year-old fillies also sprinting 5 furlongs on the inner turf. Bayerly Seen was sent off as the 9-5 favorite in the field of 12 over 7-2 Foolish Humor and 4-1 Fast Scene.

Fast Scene and Bayerly Seen battled out of the gate through an opening quarter in 21.33. On the far turn, Fast Scene opened up a 1 1/2 length lead on Bayerly Seen, but Javier Castellano aboard Bayerly Seen moved her up to challenge, gaining a short lead midstretch through 4f in 44.64. Confidently ridden by Rafael Hernandez, Fast Scene rallied at the 1/16 pole to win by a head in 56.96. It was another 3 3/4 lengths back to 12-1 Quality Heat third. 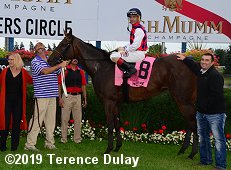 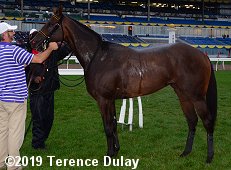 Left: Fast Scene in the winner's circle. Scooter Davis, assistant to trainer Timothy Hamm said, "She showed a lot of class today, she dug in, the horse came to her and Rafael just threw a cross on her and she came back. I was kind of worried a little bit, wondering if she would handle the turf, but she kind of redeemed herself."

Right: Fast Scene gets hosed off after the race.