The $1.5 million NetJets Breeders' Cup Mile saw Atto Mile winner Leroidesanimaux sent off as the 6-5 favorite over old nemesis Artie Schiller at almost 6-1. Twelve horses went to the gate in this Grade 1 event over the Widener Turf course, with defending champion Singletary looking to repeat as the 9-1 third choice off his win in the Oak Tree Mile.

19-1 outsider Sand Springs led the procession down the backstretch while dueling with 37-1 outsider Ad Valorem through a quarter in 23.47 and a half in 46.68, before Sand Springs dropped out of contention eventually finishing eleventh. Ad Valorem inherited the lead and held it rounding the final turn through 6 furlongs in a brisk 1:11.15 before he succumbed to the fast pace and faded to ninth. John Velazquez had kept favored Leroidesanimaux in a stalking position just behind the early leaders, and with a furlong to go, he had gained a narrow lead over the late-running Artie Schiller. The pair battled briefly, but Artie Schiller prevailed in the final 1/16, edging away to win by just 3/4 length in a time of 1:36.10 over the "good" course. Leroidesanimaux nosed out 14-1 shot Gorella in the show spot, and it was just a head back to 17-1 shot Whipper in fourth. Singletary lacked room at the top of the stretch and faded in the late stages. Sadly, Fun Fair broke down in the back stretch, was vanned off, and had to be euthanized later. 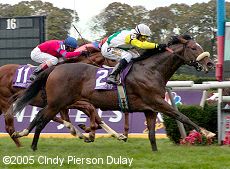 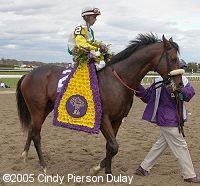 Artie Schiller with his Breeders' Cup flowers. Jerkens said, "This horse always runs his eyeballs out. The race happened the way you dream about it. I thought it was a nice post to begin with. He was a little too sharp last time (Kelso Breeders' Cup) so I told Garrett (Gomez) to split the difference this time. I told him he didn't want to be too far out of it but he didn't want to be to close either. The horse has a strong run but it's a short one and you have to time it just right. He saved ground and he got out just at the right time and everything worked out." 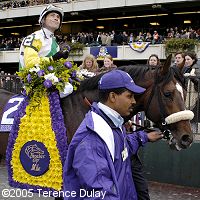 Jockey Garrett Gomez looks to the sky as Artie Schiller takes his walk down Victory Lane. Gomez said, "I had a decent trip. He left the gate a little flat-footed and I was a little worried because when I looked outside, half the field was in front me. Part of the advantage of being down inside like this, some of the guys get hung out, and some drop out, and I ended up in a good spot. Then I just had to wait and at the top of the lane and, I finally got out a little bit. And when he went, he really went and did what he had to do. It was a pleasure to ride him for Jimmy (Jerkens)." 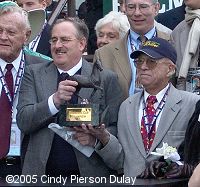 The trophy presentation with trainer James Jerkins holding the trophy on the left with the human Artie Schiller on the right. When asked about how the horse came to be named for him, Mr. Schiller said, "Well, I'm very friendly with the Entenmann family. Have been many years, went to school with him. He called me up one day a few years ago and asked me if it was all right if he named the horse after me. Actually I said, 'Bill, you been drinking?' He said, 'No. Really, I want to name a horse after you. I have to ask you. I just can't do it.' I said it's all right with me Bill, go ahead." 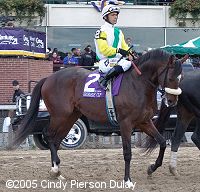 Artie Schiller in the post parade. Trainer James Jerkens said, "He's become like a pet around here. He knows the place well. When he ships out of town, he does get a little upset. When you are at home, you're just pretty much leading right over there from the stall." 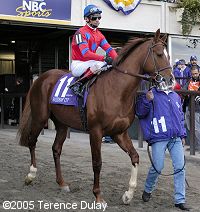 Second place finisher and beaten favorite Leroidesanimaux comes out of the tunnel from the paddock. His jockey John Velazquez said, "I tried to get him to stay back off the others on the backstretch, but he was strong the whole way. He was just very aggressive, and he because of that, I could never get him to the point where he felt comfortable without getting in his mouth. He kind of overused himself the first part. He did try in the stretch when I asked him. He just didn't have enough left to hold off the other one (winner). He's always been on the lead and they expected me to go to the lead, but I didn't want to because I knew they would be chasing me the whole way. I thought I had a good post to get him to relax outside. He just never did."

Trainer Bobby Frankel said, "When we took the shoes off him this morning to put new ones on, we found out we had to put aluminum pads on him. We didn't know this until this morning. He walked and warmed up fine with those shoes. Even though I thought about taking him out of this race, I thought it was going to be OK. It was the shoes and the outside post that got him beat today. Maybe he (John Velazquez) should have put him on the lead, but that's just second guessing." 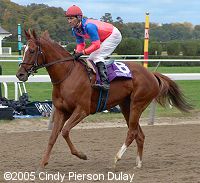 Third place finisher Gorella returns after the race. His jockey Gary Stevens said, "Patrick (Biancone) said she bounced out of her first race in this country (QEII Challenge Cup) so well that he decided to run her here and it was the right decision. She really ran well. I had a great trip and I thought I had second, but we got beat by the bob." Trainer Patrick Biancone added, "She ran good. She's still a young horse. We should have a lot of fun with her next year. My owner (Martin Schwartz) is a great man to put up the money to run and follow me."