The $4 million Breeders' Cup Classic Powered by Dodge is the richest horse race in North America and usually is the deciding factor in Horse of the Year voting. A field of thirteen (after Rock Hard Ten scratched Friday due to an injured foot) went to the gate in this Grade 1 event at 1 1/4 miles over the main track at Belmont Park. Saint Liam was sent off as the lukewarm 2-1 favorite over 5-2 Borrego, with the New Zealand bred $800,000 supplement Starcraft the 8-1 third choice.

As expected, 30-1 shot Sun King went straight to the front and set a respectable pace of 23.98, 47.68, and 1:12.23 while battling with 16-1 shot Suave just to his outside. Rounding the final turn, the pace faltered as the favorite Saint Liam was just getting into gear. Jerry Bailey kept him out of trouble down the backstretch by going to the outside. Turning for home he drew alongside 10-1 shot Flower Alley in mid stretch and wore down that rival through the last 100 yards to prevail by a length in a time of 2:01.49 over the fast track. It was another 1 1/2 lengths back to 14-1 shot Perfect Drift in third and a neck to 69-1 longest shot on the board Super Frolic in fourth. Starcraft simply failed to fire, disappointing in seventh, as did Borrego, who was never in it and finished tenth. 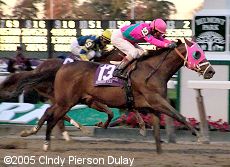 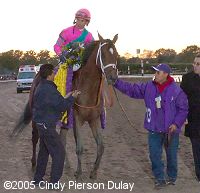 They tried a different way of parading the Classic winner this year which made it almost impossible to get a good photo. Here is Saint Liam as they put the flowers on him. 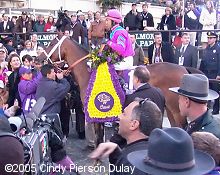 The winner's circle was a total zoo, but here a bit of a look at Saint Liam during it all. Jockey Jerry Bailey, winning his fifth Classic and his 15th Breeders' Cup race, said, "I was trying to keep him off the leaders for as long as I could to leave him with a target. When I turned up the backside I was really pleased with how well he was travelling and where I was at. I knew I had Flower Alley. You just don't want anyone to come flying up. But it was going to take a magnificent effort to beat him today. 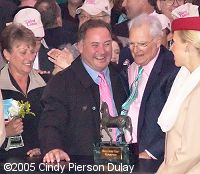 The trophy presentation in the winner's circle with trainer Richard Dutrow Jr. on the left and owner William K. Warren on the right. Dutrow said, "He started in February and has danced every dance, and he showed up today. I thought he'd win easier than he did. We had a plan but you have to have the horse. It's all about the horse. My confidence was in my horse. He showed me all the signs for the last month that he was mad. He wanted to go out there." 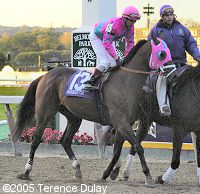 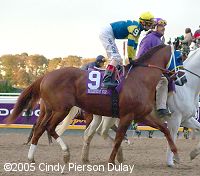 Second place finisher Flower Alley in the post parade. His jockey John Velazquez said, "We had good position. I was where I wanted to be when I asked him, and he responded. The winner was just a little better today. I think he should get (champion 3-year-old). The Breeders' Cup Classic is the best of the best. He ran 1 1/4 miles against older horses and almost won it." Trainer Todd Pletcher added, "When it looked like he was beaten, he dug in. He just kept on fighting. He will race again next year." 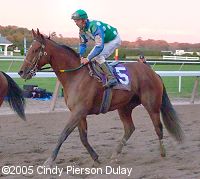 Third place finisher Perfect Drift returns after the race. This was his fourth try at the Classic and his best finish so far. His trainer Murray Johnson said, "We're delighted. We feel like winners. It was a big effort. We're getting closer every year. Next year we should get here. He's going to keep racing, he is a gelding.