With just a day to go before the 22nd Breeders' Cup World Thoroughbred Championships, lots of the contenders came out for last-minute jogs over the main track and turf course. Slightly warmer weather and clear skies served to dry the main track further after the heavy rains earlier in the week, although the turf course is still yeilding and not expected to improve before the races. Several European imports cleared quarantine yesterday, so those horses were out for their first tests of the Belmont course. Many more horses were out than are shown here, but we decided to concentrate on favorites and ones we had not featured yet this week. 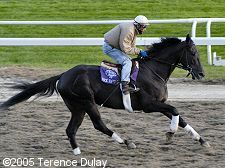 Rock Hard Ten galloped on the main track this morning, but upon returning, was scratched from the race by trainer Richard Mandella due to an injured right front foot. Mandella said, "I'm very disappointed, but I've been training a long time, and once you get your senses about you, you're thankful it happened here and not on the track (during a race), when he could have broken a leg or gotten hurt badly. He's been perfect all through the summer. I said he hasn't had a bad day in three months and afterwards said, 'Why did I say that?'" 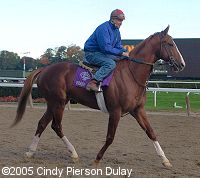 Borrego galloped 1 1/2 miles on the main track. Trainer Beau Greeley said, "He's got to run his race. If he does run his race, I think he'll win. He's doing well. You have to respect everybody in the race, but I wouldn't want to trade spots with anyone." 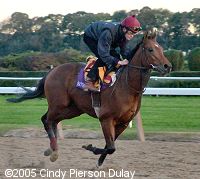 Oratorio cantered on the main track with owner John Magnier looking on. Trainer Aidan O'Brien said, "The only thing we're not sure about him is the dirt. We've always felt that horses that win the Classic are tough, they have speed and they stay a mile and one-quarter real well. He has all those things. He cantered around on the dirt this morning very happily and we were very happy with him, but we won't really know until those gates open. Kieren (Fallon, jockey) knows him better than anyone else and if he breaks well, who knows. Bob Duncan, who was a former New York Racing Association starter, has been over working with the horses at Ballydoyle. He has his own method and has been preparing them for the stalls using a bell and other things." 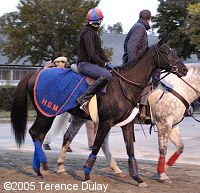 Better Talk Now galloped 1 1/4 miles on the inner turf course. "Even today, to come here with three legitimate chances to win this year, you don't expect days like this, you only hope for days like this," said trainer Graham Motion. The 6-year-old gelding with more than $2.6 million in earnings is expected to continue his career next year. "As long as he stays sound, I don't see any reason why he wouldn't. Maybe, he can come back to run in the Turf again." 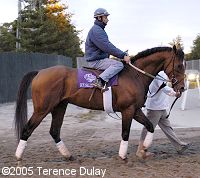 Gun Salute galloped 1 1/2 miles on the main track. "He went really smooth and came home good," trainer Bill Mott reported. "He looks good. He's a real tough horse. We hope he makes a good showing. It'll be a good measuring stick for what we can expect from him next year." 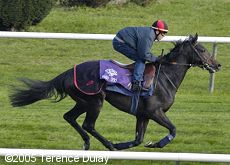 Bago galloped 1 1/2 miles on the inner turf this morning with jockey Thierry Gillet aboard. "I haven't been on it this morning but I will be later," Niarchos Family racing manager Alan Cooper said. "It's changing all the time. Thierry found it heavy yesterday but there are a lot of stories going around about whether it will dry out or not. I don't think it will be a problem, and Thierry's happy with him." 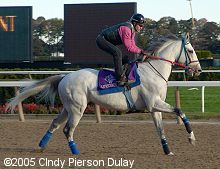 Leprechaun Kid galloped 1 1/2 miles on the main track under exercise rider Rhonda Nalley. "He was a gorilla this morning," said trainer Mike Mitchell "We galloped him a good mile and a half just to get a little edge off him. We took him to the paddock and schooled him." 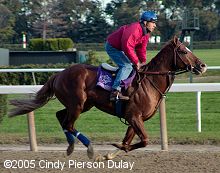 Leroidesanimaux was out after the 8:15 renovation break for a 1 3/8-mile gallop around the main track and visited the starting gate under exercise rider Nuno Santos. Trainer Bobby Frankel said "I had the kid take him to stand in the starting gate. I want to make sure he breaks well. He'll go to the track tomorrow morning, too. Early." 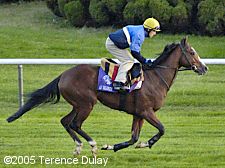 Ad Valorem galloped 1 mile on the inner turf course with jockey Kieren Fallon aboard. "In an ideal world he would like fast ground," trainer Aidan O'Brien said. "I don't know how bad it's going to be, but it's not going to be as bad as European soft ground. Ad Valorem has been crying out for nice ground all year, and he's had no luck the whole year. He was slowly away at Keeneland (in the Oct. 8 Shadwell Turf Mile), but he came home really well." 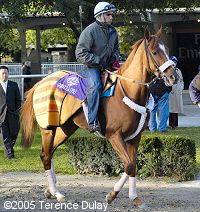 Gorella jogged 1 1/4 miles on the main track. Trainer Patrick Biancone said, "When she came to me, she had beaten (males) already in Europe. She was just coming to form before the (Queen Elizabeth II Challenge Cup) and I told the owners if she did come to form we might have to go for the big dollars. She has improved from that, and I think she has a shot." 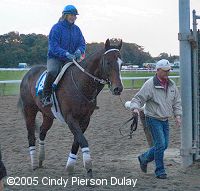 Lost in the Fog went out for a gallop on the main track just before dawn with 85-year-old Harry Aleo on hand, recovering from knee replacement surgery. Aleo said, "I want to give him every chance to be as good as he can be," Aleo said. "People love the horse and that's what it's all about. Some horses, when they get good, they don't get a chance to be as good as they can be. This is something that money can't buy. I've owned horses for 27 years and you dream of this. But I never dreamed that I'd have the wonder horse. If he wins this Saturday, I'll jump out of the stands." Asked if Lost in the Fog deserves Horse of the Year consideration, Aleo responded, "Not only Horse of the Year, but horse of a lifetime. What else can you ask of a horse?" Trainer Greg Gilchrist said, "I get the butterflies, but I try to not show that I'm nervous. Do I feel pressure? Yeah, I'd be lying if I said no, but I bring it upon myself. I'd hate for him to pick this one to get beat, but I'd tell you that the next time he runs. And right now, 11 for 11 would sure sound good." He is shown here with trainer Greg Gilchrist leading him off the track. 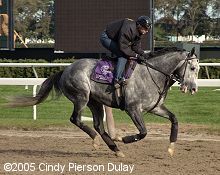 Imperialism schooled in the paddock and then galloped 1 1/2 miles on the main track with trainer Kristin Mulhall aboard. Mulhall, the youngest trainer in Breeders' Cup history at 23, said, "He's feeling awful good. We went over to the paddock and he dragged me around there. He wants to go." Groom John Flakes added, "We've had him over in the paddock the last couple of afternoons, and he'll go back over for schooling again today. He's a handful when he goes over there. He always is. He wants to do something. He thinks he's going to race." 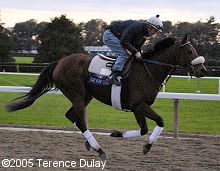 Flip Flop galloped 1 1/2 miles on the main track. Trainer Ben Cecil said, "She's very high-strung. But we have a goat that's her buddy. I need to find out if we can take the goat into the detention barn with her. That's my big worry. If we can't do that, then I might as well not run her. It would be a disaster. I think her last race (second in Santa Anita's Yellow Ribbon) was very good. We kind of waited a little longer (to make her move) than I wanted. I thought if we would have come a little earlier, we might have given (winner) Megahertz more of a race for her money. But I'm very happy with the way she ran." 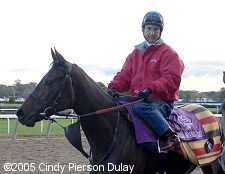 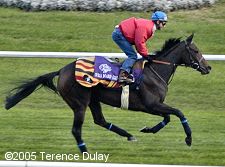 Ouija Board went out for a gallop on the inner turf course with new jockey Jerry Bailey aboard. Lord Derby, who owns Ouija Board, said Friday he was delighted the filly has recuperated well enough to get a chance to defend her Filly & Mare Turf title. "It was touch and go there for a while," he said. "I give Edward Dunlop all the credit for being careful, conservative and protective of the filly. But she's doing fantastic right now, as good or better than last year." 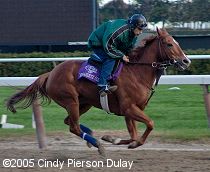 Megahertz went out for a 1 3/8 mile gallop around the main track at Belmont Park under exercise rider Orlando Tiapia. The Filly and Mare Turf will be the final start of her career. 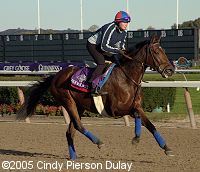 Film Maker galloped 1 1/2 miles on the main track. "I think Pat's excited about riding her again," said trainer Graham Motion, noting that Valenzuela felt like he'd learned a lot about the filly while finishing a close third in the Flower Bowl. "Her races tend to be a little peculiar at times. She's been shuffled back early a couple times. Once you ride a horse, it helps you to learn about the horse. She obviously has great value as a broodmare, but there's a chance she could stay in training," 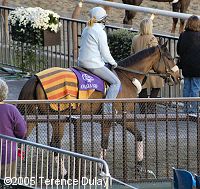 Angara jogged 1 1/4 miles in her final preparation for the race. Trainer Patrick Biancone said Friday morning his Beverly D winner would "upend them all" on Saturday. "She looks good; she's going to win the Breeders' Cup." 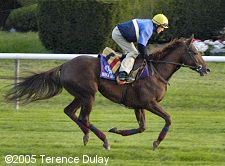 Mona Lisa galloped on the turf course Friday morning under jockey Kieren Fallon. "In an ideal world she would like fast ground," said trainer Aidan O'Brien. "I don't know how bad it's going to be, but it's going to be nothing like European soft ground. She's very much like her dad. The more racing and work she gets, the more she comes out smiling. Kieren was very happy with her this morning." 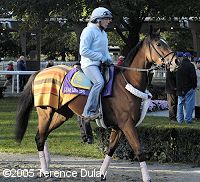 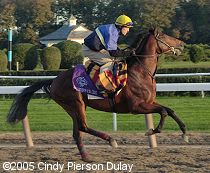 Ivan Denisovich galloped around the Belmont main track for the first time, with jockey Kieren Fallon aboard. Trainer Aidan O'Brien said he feels the colt's running style and pedigree dictate giving him a chance in the Juvenile. "He's always wanted fast ground and dirt horses need to handle fast ground. He's always showed enough pace on fast going that we thought he would get seven furlongs or a mile with no problem. And his dam ran very well on the dirt." 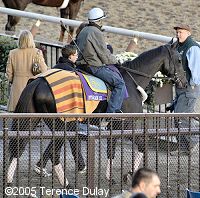 Stream Cat jogged 1 1/4 miles on the main track. "Stream Cat would have to be an extreme cat to win," trainer Patrick Biancone joked of his 30-1 shot. "He's in good form. We're here to enjoy the races. It's the biggest race day in the world. My clients are happy to be here. If we win, we'll celebrate. If we don't win, we'll celebrate." Biancone said the Turfway Park Polytrack he trained his Breeders' Cup horses on this month is the shape of the future. "It's a lovely surface. The horses enjoy it. In 20 years, everybody will be using it."