Tuesday was a total bust as far as workouts went. The remnants of hurricane Wilma were passing by so it was pouring rain, high winds, and about 50 degrees making for a totally miserable morning. Because of this, many horses just walked the shedrow and didn't even come out. A few went to the training track, but unfortunately we were over at the main track and missed them and the turf course was closed. The only Breeders' Cup horse we saw today was Jack Sullivan who shipped over from the UK to go in the Classic. More horses were scheduled to arrive today and the weather is supposed to clear up overnight, so hopefully tomorrow will be better. 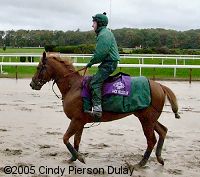 Jack Sullivan, a 4yo son of Belong to Me, cantered around the main track twice Tuesday morning then schooled briefly in the paddock. No jockey has yet been named for the British-based runner, who has won four races in his career including a Group III race in Dubai.

Here is a summary of what all the Breeders' Cup horses at Belmont did today: