Although the racing takes center stage at the Breeders' Cup, there are other images and events during the day besides the horses. Here is a selection of images from the opening ceremonies, the re-enactment of the first horse race in America, and other images from the day. If you want racing photos, just go to the race of your choice above for at least eight images from each. 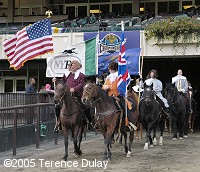 Re-enactors including students from Garden City High School and Middle School and members of the Islip Horseman's Association, Long Island Drill Team outfitted in 17th century period costume as they re-enact the first horse race in America which took place in 1665 on Hempstead Plain, the forerunner to modern day Garden City. 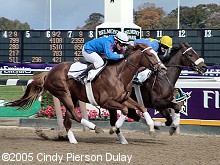 The finish of the match race, which ran the length of the stretch rather than the original two miles, with the inside horse winning by a nose. In the original race the chestnut horse on the outside was actually a gray. 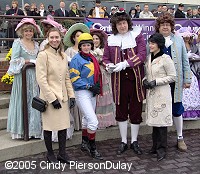 Garden City High School Principal Hank Hardy in the role of Governor Nicolls presents a replica trophy housed at the National Museum of Racing and Hall of Fame in Saratoga Springs, N.Y., to the winner of the match race. The re-enactment took place at 10:45am before the opening ceremonies. 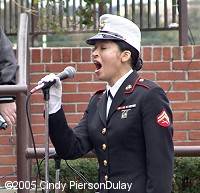 One of the Marines sang the National Anthem for the opening ceremonies and did a very excellent job of it. Unfortunately I didn't catch her name. 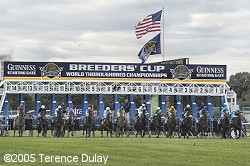 The horses break from the gate for the Breeders' Cup Filly and Mare Turf. Because of the size of Belmont Park, this was the only race that started in a position to allow a photo of the start unless you wanted to take a very long walk. 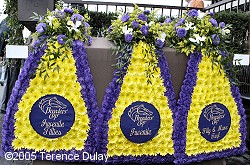 The floral blankets for the winners of the first three races waiting for their new owners. 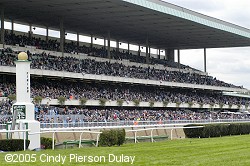 The crowded stands just before the start of the Filly and Mare Turf. Because of the cold, most fans went inside between the races to stay warm and only came to their seats for the races. 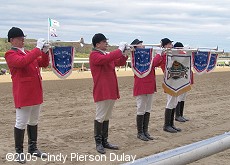 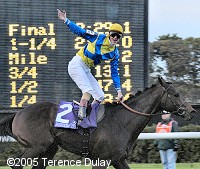 The award for most excited winning jockey would have to go to Christophe Soumillon in the Turf. He was blowing kisses to the crowd way before the finish and didn't stop until after the winner's circle. 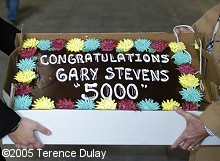 Jockey Gary Stevens was only one win away from his 5000th victory and they had a cake on hand to mark the occasion if he won on Saturday. Perhaps that jinxed him as he was shut out in six mounts. He did get number 5000 on Sunday at Belmont but instead of getting to eat the cake, he wound up with his face pushed in it. 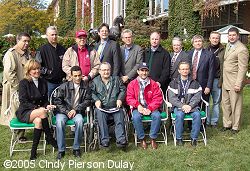 I caught this posed shot on Friday morning out by the Breeders' Cup statue. I am not sure who they all are, but from left to right on the back row are Terry Meyocks, Todd Pletcher, Ken Ramsey, ?, ?, Richard Mandella, ?, Jack Knowlton, ?, ?. On the front row are ?, John Velazquez, Ron Turcotte, Jerry Bailey, Pat Day. Some of the others look familiar but I can't place the names.