The $500,000 Woodward Stakes (G1) was traditionally run at Belmont Park in the early part of its Fall Championship Meeting, as a prep race for the Jockey Club Gold Cup and ultimately the Breeders' Cup Classic. This year, the race was moved to closing weekend at Saratoga, and a field of ten older horses went to the gate in this 1 1/8 mile trip before a small on-track crowd of just 13,111. Sun King came into the race off of three consecutive second place finishes including a nose defeat to Invasor in the Whitney last time out. Flower Alley, last year's Travers winner, was ninth in the Whitney last out. Both Sun King and Flower Alley went off as the shortest prices on the board at 5-2, with Washington Park Handicap winner Suave the 7-2 third choice. Funny Cide was making a comeback into Grade 1 competition, dismissed at 12-1 off an easy win in the Dominion Day Stakes at Woodbine in his last start.

21-1 longshot Second of June battled on the front end with 31-1 outsider Premium Tap through fractions of 23.63, 47.37, and 1:11.88, with Funny Cide stalking the pace in third for the backstretch run. Entering the far turn, Funny Cide tired badly and dropped out of contention to eventually finish eighth. At the top of the stretch, Sun King, who had raced well back in seventh, put in his usual late rally and was gaining ground through the lane. Premium Tap finally poked his head in front of Second of June with a furlong to go, and the two pacesetters continued to battle through to the end. With Sun King quickly closing the gap, Premium Tap managed to hold off Second of June to prevail by just 1/2 a length in a time of 1:50.65. It was just 3/4 length back to Sun King in third, and along 3 1/2 lengths to 40-1 Papi Chullo in fourth. Co-favorite Flower Alley raced four wide near the rear of the field the whole way and showed nothing late, finishing seventh. Suave raced midpack the whole way but had no response when asked by jockey Calvin Borel and was last. 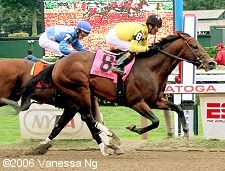 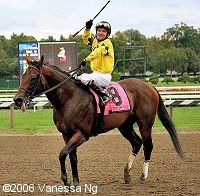 Kent Desormeaux celebrates as he returns aboard Premium Tap after winning the Woodward. Desormeaux said, "He's a very, very good gate horse, and that gets him away and out of trouble. I had him where I wanted him, and he was full of himself. I actually had to slow him down. In the lane, I just threw in a lead change and let him go. It was a measured victory.He's just loving Saratoga right now. I had gotten on him a couple of times after the Whitney and he just dragged me around there. All I tried to do was keep him between the fences. he did the rest. Second of June really took a good run at him and (Premium Tap) was really brave turning him back. John Kimmel has done a great job with him." 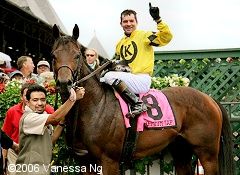 Desormeaux is still celebrating the longshot win in the winner's circle. Winning trainer John Kimmel said, "He missed a lot of training going into the Whitney and we thought he could have improved. He only had one breeze. He had two nice breezes between this race and the Whitney. We decided to run here and not go in the Brooklyn (Breeders' Cup) where he is not Breeders' Cup eligible. He's kind of been under the radar for quite some time. I'm really proud of the effort. If we can keep him sound and healthy, we got some things to look forward to. There are plenty of good races. There's the race after the Breeders' Cup at Churchill Downs, and the race at The Meadowlands. Maybe we can take a trip to Dubai with him next year." 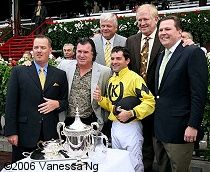 The trophy presentation for the Woodward Stakes. 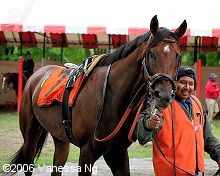 Second place finisher Second of June in the paddock before the race with his very happy groom. His jockey Garrett Gomez said, "He really ran good. I wanted to get him away from everyone and put him in the race. We were able to get clear and had a good trip from there. I was actually surprised Desormeaux came back on me. I gave him a breather down the backside. When I turned for home, I thought he had a little more than he actually did. He just got beat by a better horse today." 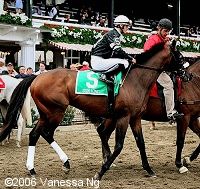 Third place finisher and beaten favorite Sun King in the post parade. His trainer Nick Zito said, "He always tries and never runs a bad race. He tried his guts out. Speed has run good all day. He could not make up any ground. He's the only one that tried." Jockey Julien Leparoux added, "I think we had a good trip. We kept coming to the leaders, but they were hard to catch today." 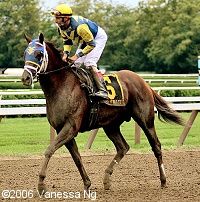 Seventh place finisher and second favorite by a very narrow margin Flower Alley returns after the race. His trainer Todd Pletcher said, "I don't know what happened. He never fired at all. He went into the first turn and got fanned out a bit, but the fractions were pretty moderate and he didn't keep up. We'll re-group." 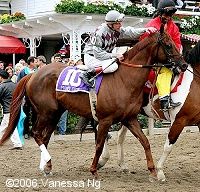 Popular New York-bred Kentucky Derby winner Funny Cide made his second career start at Saratoga in the Woodward, but finished a well beaten eighth, a head behind Flower Alley. Jack Knowlton, managing partner of Sackatoga Stable said, "It's disappointing, sure. People wanted to see him do well and he didn't. I think the fans were pleased to see Funny Cide in the paddock and see him race. They're disappointed in the outcome, but that's horse racing ... We took a shot, we knew the water was deep, but clearly, he didn't run his race today."