The $1 million Travers Stakes is the highlight of the Saratoga meeting. Dubbed the "Mid-summer Derby", some of the best 3-year-olds in the country did battle in this prestigious Grade 1 event at 1 1/4 miles on the main track before a crowd of 42,841 fans. With Giacomo and Afleet Alex sidelined due to injury, the Travers was left wide open with no clear favorite. Haskell Invitational winner Roman Ruler was sent off as the lukewarm 2-1 favorite over Wood Memorial winner Bellamy Road at 5-2. Bellamy Road had not raced since finishing seventh in the Kentucky Derby. Also in the field were 3-1 third choice Flower Alley who was a runaway winner of the Jim Dandy and 8-1 fourth choice Don't Get Mad, winner of the Derby Trial and the Northern Dancer at Churchill Downs.

As expected, Bellamy Road went straight to the front to set the pace the whole way around the track, through fractions of 23.54, 47.43, 1:10.92, and 1:36.38, while Flower Alley stalked him to his outside for the backstretch run. 15-1 shot Andromeda's Hero sat back in third, while the favored Roman Ruler rated off the pace back in fourth. Turning for home, Bellamy Road held the lead but Flower Alley was closing the gap fast. With a furlong to go, Flower Alley finally collared the pacesetter and drew away to a 2 1/2-length win in a time of 2:02.76 for the 1 1/4 miles. It was another 2 3/4 length back to Roman Ruler in third, and 2 1/2 more back to late-closing Don't Get Mad in fourth. 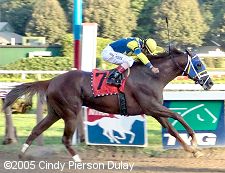 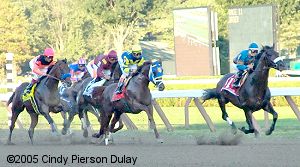 First time by the stands with Bellamy Road on the lead and Flower Alley not far behind. Nick Zito, trainer of runner-up Bellamy Road and 5th place finisher Andromeda's Hero, said, "Bellamy Road ran his heart out. I've said it before, he's a terrific horse. We were right there with the winner, but he was a little better than us. We'll try to beat him next time. I've very proud of my horses. Bellamy Road hasn't run in four months. He came here and fought all the way. I think the horse will be okay. This was great stuff." 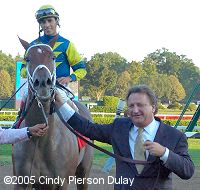 Owner Eugene Melnyk leads Flower Alley to the Travers winner's circle. Melnyk said, "We all talked before the race and we said, 'Don't let this guy (Bellamy Road) get away.' John (Velazquez) is such a professional and he chased Bellamy Road and made his move at right time. John and Todd (Pletcher) are two pros and when you get two pros teaming up at right time, it makes you look really smart. Skipping the Belmont Stakes was everything. Thirty seconds after the Kentucky Derby, we said, 'This is Travers time.' This is huge for me. I've been coming here for 25 years, and you can't imagine what it means to me to win the Travers" 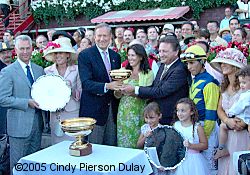 The Travers trophy presentation with trainer Todd Pletcher on the far left, Jockey John Velazquez on the right, and New York governor George Pataki presenting to owner Eugene Melnyk in the center. Winning jockey John Velazquez said, "This is great. It is very special to me. From the start, I wasn't going to let Bellamy Road go. I got after him at the 3/8 pole and then I asked him and he took off and I still had a lot left. He was very good today. It's really special because it is for Todd (Pletcher) and the Melnyks." 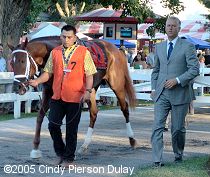 Trainer Todd Pletcher with Flower Alley in the paddock. Pletcher said, "It unfolded the way we thought it would and the way we hoped it would. It seemed clear cut on paper: Bellamy Road would be on the lead, we would be second and Roman Ruler would be stalking us. The key, I thought was that Johnny (Velazquez) made the right decisions all the way around. At the 3/8 pole, he put on a little pressure and that was difference in my opinion. This was a home run. The Jim Dandy was the kind of performance that propelled Flower Alley to the next level. Who knows, maybe he can step it up in the Breeders' Cup?" 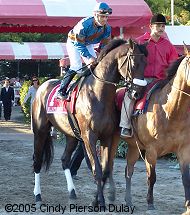 Second place finisher Bellamy Road enters the track before the Travers. Hid jockey Javier Castellano said, "He settled down real good and ran a beautiful race. He set a good pace in the race. At the quarter pole, I saw Johnny (Velazquez) right next to me. I hit my horse and he took off. Johnny just had more horse than me today. I felt very confident. Every time I hit the horse, he responded. Coming off the layoff, he got tired. I think the horse has a great future. I want to say thank you to Nick Zito. He did a great job getting the horse ready, and so did the exercise riders and the groom. He's a very good horse." 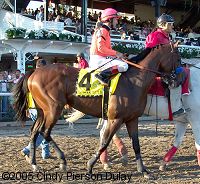 Third place finisher and beaten favorite Roman Ruler in the post parade. Bob Baffert, trainer of beaten favorite and third place finisher Roman Ruler, said, "He probably should have been closer. We had to be up close today; the track was really deep. But we also didn't want him to run off and get rank. It was the first time he had gone that long. He may have needed the mile and a quarter. At least, he didn't embarrass himself. He ran a good race. But with Bellamy Road in the race, it changed the whole thinking process. We were waiting for Bellamy Road to stop, and he didn't." Jockey Jerry Bailey added, "At the half-mile pole, I tried to get him going but he shook his head. I don't know if it was the dirt being kicked in his face or something else. So, I moved him out and went after Johnny. My horse made a middle move, but didn't make up the ground I thought he would. He was third-best today." 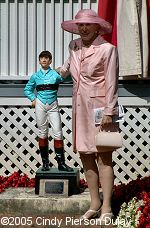 Mary Lou Whitney, owner of last year's Travers winner Birdstone, poses next to the jockey statue in the walking ring that is painted with the Travers winner's colors each year. Tomorrow it will be changed over to Melnyk's silks as will the canoe in the in infield lake. Last year Mary Lou Whitney said about her first Travers victory, "It's like a dream come true. I always wanted to see my colors on that canoe out there."