Canada's version of American Independence Day is Canada Day, celebrated on July 1. Formerly known as Dominion Day, Woodbine annually commemorates the Canadian Confederation with the Dominion Day Stakes (G3), a 1 1/4 mile trip around the main track for older horses for a purse of $200,000. 2003 Kentucky Derby and Preakness winner Funny Cide shipped in for trainer Barclay Tagg for his first start outside of the United Stakes, becoming the first Derby winner to race at Woodbine since Sea Hero in the 1993 Molson Million. Funny Cide was sent off as the 8-5 favorite in the field of seven, with local hopes Cryptograph the 2.25-1 second choice and Arch Hall the 9-2 third choice. Owners Ken and Sarah Ramsey shipped in 5-1 fourth choice Nolan's Cat from Churchill Downs. The Dominion Day Stakes is the last graded stakes to be run over Woodbine's 1 mile dirt surface, as dirt racing moves to a temporary 7 furlong oval next weekend while the dirt track is replaced with Polytrack.

When the gate opened, jockey Richard Migliore and Funny Cide showed early speed taking the lead right away by a head over 12-1 Summer Book crossing the finish line first time by, after an initial quarter mile in 23.62 seconds. Funny Cide set a reserved pace while the field let him get loose on the lead, and he was 2 1/2 lengths clear through a half in 47.14 with Summer Book and Cryptograph giving chase. Migliore sat chilly during the backstretch run and around the far turn, as Funny Cide went 6 furlongs in 1:11.48 and a mile in 1:35.98. At the top of the stretch, jockey Todd Kabel asked Cryptograph for his best run and got it, as the second choice quickly closed the gap and the pair battled it out down the lane. Inside the 1/8 pole, Funny Cide finally shook off the stubborn Cryptograph and drew away to a 1 1/2 length victory, completing the distance in 2:02.41 over a fast main track. Nolan's Cat, who raced at the back of the pack most of the way, closed well to take second away from Cryptograph in the final strides by a nose. It was 2 lengths back from that pair to 16-1 shot Scipion in fourth, while Arch Hall was fifth. The win made Funny Cide the first Kentucky Derby winner to win at Woodbine since 1973 Triple Crown winner Secretariat closed out his career in the Canadian International.

Funny Cide is one of only two Kentucky Derby winners still in training, the other being 2005 winner Giacomo. 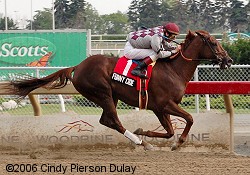 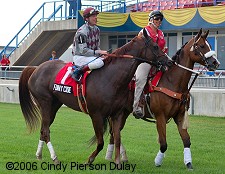 Funny Cide returns after the race to the applause of the crowd. Winning jockey Richard Migliore said, "I kind of figured we'd be on the lead. I knew I had horse. When the challenge came, he met it. He likes to fight. As long as he can see them, they weren't going to beat him." 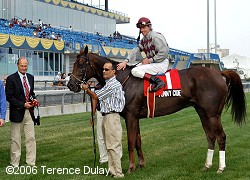 Funny Cide in the winner's circle with trainer Barclay Tagg on the left. 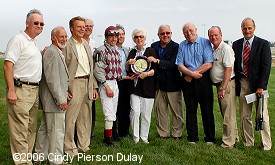 The Sackatoga connections pose for the trophy presentation. Jack Knowlton, managing partner of winning owner Sackatoga Stable, said "We've been all over the country, now we've been international with him. He's taken us places we never thought we'd go. It's great being in the winner's circle and it's a real thrill to be a winner at Woodbine." 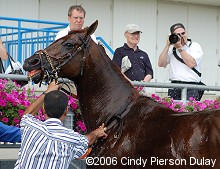 Funny Cide gets hosed off after the race to cool down. He is notorious for not liking it hot, and while it wasn't oppressive today, it was still around 80 degrees at race time. 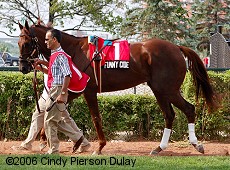 Funny Cide in the paddock before the race. He was a bit rambuctious at times, but didn't act up too badly. 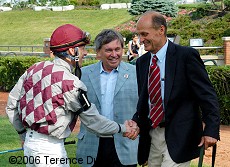 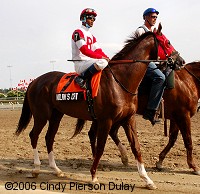 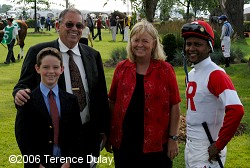 Right: Ken Ramsey, owner of Nolan's Cat, poses with his family and jockey Patrick Husbands in the paddock. 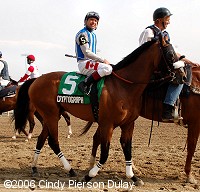 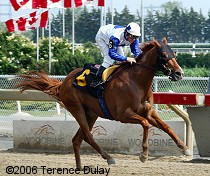 On the undercard of the Dominion Day Stakes was the $150,000 Achievement Stakes for Ontario-bred three-year-olds sprinting six furlongs. 9-10 favorite Tothemoonandback took over the lead on the far turn through a half in a quick 43.78 seconds, and then drew away to win over the late-closing 4-1 shot Bad Hat by 3 1/4 lengths, in a time of 1:08.33. The stakes-record time was just 0.28 seconds off the track record set by Chris's Bad Boy in 2003.