The undercard feature on Woodward day at Saratoga was the $250,000 Forego Stakes (G1), a 7-furlong sprint on the main track for older horses. Eleven went to the gate on Saturday afternoon, with New York-bred Commentator sent off as the 9-10 favorite off a 6 1/4 length victory at Belmont in his last start. Also in the field were 5-1 second choice and Vanderbilt Breeders' Cup winner War Front and 6-1 third choice Pomeroy, second in the Smile Sprint Handicap at Calder last out.

When the gate opened, jockey Julien Leparoux hustled 46-1 outsider Spanish Chestnut to the front and he battled with Pomeroy through an initial quarter in 22.74 seconds, with 32-1 Judith's Wild Rush and War Front close behind in third. Pomeroy poked his head out in front after a half in 45.65, and held the lead rounding the turn as Spanish Chestnut dropped from contention. War Front came out three wide to make a late bid for the lead but Pomeroy dug in when challenged in mid-stretch and pulled away to win by 2 1/4 lengths in a time of 1:23.39. It was just a neck back from War Front to 37-1 Friendly Island in third. Commentator broke poorly out of the gate, raced in mid pack along the rail, and had nothing left for the drive finishing tenth. 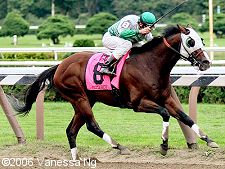 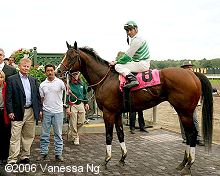 Pomeroy in the winner's circle. Winning trainer Martin Wolfson said, "He ran terrific and had trained so good going into it. I thought he needed the race (Smile Sprint) at Calder last time. I was happy that Commentator was not the horse in front of him. I was very confident off the turn. After we bought him in the fall, we took a chip out of his ankle and I've got to believe it's really helped him. He's a tremendous animal with a beautiful confirmation. I really had only planned on running him two to three times this year, so we might train him into the (Breeders' Cup Sprint)." 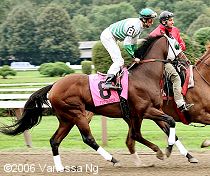 Pomeroy in the post parade. Winning jockey John Velazquez said, "We just sat there and waited. The first two or three jumps out of the gate went pretty good. By the fourth jump, he was in the bridle and I didn't have to do much with him." 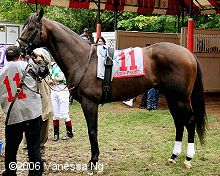 Second place finisher War Front in the paddock before the race. His jockey Jose Santos said, "He cut his hind leg breaking from the gate, and maybe that is why he got a little tired at the end. The track is playing real heavy and slow, because I think they were anticipating the rain. My horse put in a huge effort." 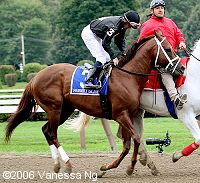 Third place finisher Friendly Island in the post parade. His jockey Garrett Gomez said, "The plan wasn't to come from behind, but I got in a tangle with Commentator and fell back. He put in a big run and, turning for home, my eyes got real big. I thought I had a big chance to run them down. It's tough for a horse to be taken out of his game and still run big, but he sure did today." 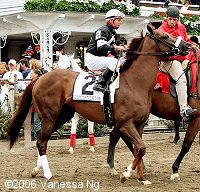 Tenth place finisher and beaten favorite Commentator heads to the track for the post parade. His trainer Nick Zito said, "Eibar said he lost all chance when he stumbled. He tried to beat the gate; when you got the inside, you have to come out of there." Jockey Eibar Coa added, "He wasn't right in the gate, but I was trying to get him right. He left the gate and stumbled. I lost position and the whole thing."