The Grade 1 Joe Hirsch Turf Classic Invitational, a 1 1/2 mile trip around the Widener Turf Course, is one of the key final preps for the Breeders' Cup Turf. Seven older horses went to post in this $750,000 event with the undefeated Shakespeare sent off as the 9-10 odds-on favorite. The Bill Mott trainee came into the race with a 4-for-4 lifetime mark, including a win in the Belmont Breeders' Cup Handicap last time out. The two-horse entry of Salford City and Ace were the joint 5-2 second choice for owner Michael Tabor, while Virginia Derby winner English Channel was the 5-1 third choice in his first start against older horses. Two horses, Ace and 18-1 outside Islero Noir, shipped in from Europe earlier in the week and were making their first American starts.

Islero Noir was quickest out of the gate and set the early pace while saving ground close to the rail as Ace stalked him to his outside through easy early fractions of 24.87, 50.72, 1:15.91, and 1:39.48 over the firm going while English Channel stayed in close contention in third. Turning for home, Islero Noir tired and dropped out of contention, and jockey John Velazquez sent English Channel to the front at the head of the stretch, getting 1 1/4 miles in 2:03.10. But the favorite was just getting into gear, as Jerry Bailey took him out in the four path for his late bid after tracking the pace in fifth down the backstretch. At the 1/8 pole, Shakespeare and English Channel hooked up and the pair battled head to head to the line. At the finish, the favorite prevailed for a head victory in a time of 2:27.22 for the 1 1/2 miles. It was just 3/4 length back to Ace in third, and a length more to 11-1 shot Meteor Storm in third. 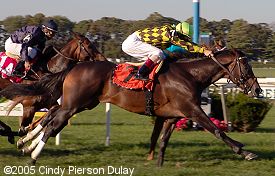 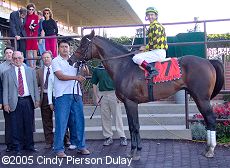 Shakespeare in the winner's circle with owner William Schettine and trainer Bill Mott. Mott said, "He was great. Obviously, he didn't run away from his fields, but that may be better because he showed he could fight a little bit. A lot of horses won't win a dogfight. He showed he had it in him. You just hope it doesn't set him back. Sometimes, hard races can set horses back and they are not at the top of their game, but we do have four weeks. To come from six or seven lengths back off a slow pace is a strong feat. If he's healthy, he goes to the Breeders' Cup Turf." 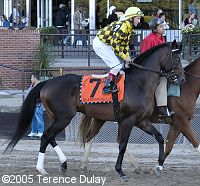 Shakespeare in the post parade. Winning jockey Jerry Bailey said, "I was more worried about him today than I will be four weeks from now. I think he probably regressed a little bit. He was still good enough to get the job done. He had the worst trip of anybody. I was parked on both turns. I had to put him in to probably a four and a half to five-furlong drive. I know English Channel can blast off at any minute, and I didn't want to give him the edge. I'm very thrilled. He's the kind I get up early in the morning for." 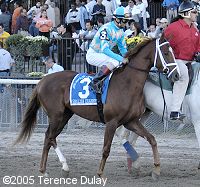 Second place finisher English Channel in the post parade. His trainer Todd Pletcher said, "He ran a dynamite race. We're delighted with his effort. He came up on the wrong end of the bob. It was a slow pace, but I'm happy and pleased with the way he relaxed and rated with that kind of pace. This is a big, big race for him and we'll probably go on to the (Breeders' Cup Turf)." Jockey John Velazquez said, "English Channel ran an incredible race. He kept giving me more coming down the lane. He did not want to give up, but each time he tried to get the lead, Shakespeare kept coming back. He was unbelievable." 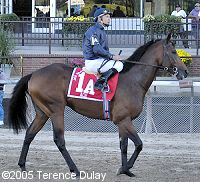 Third place finisher Ace in the post parade. T. J. Comerford, assistant to trainer Aidan O'Brien said, "The pace was too slow for him. Come Breeders' Cup times, they should be going quicker. He'll go back home tomorrow." Jockey Patrick Valenzuela said, "He got beat a length for everything. I think he will relax a little better next time. It was a slow pace. He seemed to relax, but I wish he would have come off the bit a little better. If he could have relaxed, he would have finished a little better. He's a very good horse."