A field of seven older fillies and mares went to post in the Grade 1 Beldame Stakes, the major local prep for the Breeders' Cup Distaff in four weeks' time. As expected, defending Distaff champion and Eclipse Award winner Ashado was sent off as the 3-2 favorite in this $750,000 event at 1 1/8 miles despite her fourth place finish in the Personal Ensign last time out. Alabama Stakes winner Sweet Symphony was the 5-2 second choice, making her first start against older company, and Society Selection was the 5-1 third choice, off a second place finish in the Go For Wand last time out.

6-1 shot Dream of Summer set the early pace with Ashado staying just to her outside through fractions of 24.50 and 47.64 down the long backstretch. Turning for home, Ashado poked her nose out in front through six furlongs in 1:11.48, and pulled ahead to a 2-length advantage with a furlong to go, as Dream of Summer tired and dropped out of contention. 10-1 shot Happy Ticket, who was fourth early, angled out and made a strong rally through the stretch but Ashado held her off in the final strides, winning by just 1/2 a length in a time of 1:48.88 for the 1 1/8 mile distance. It was 2 1/2 lengths back to Society Selection in third, and another 3 1/4 to Sweet Symphony in fourth. 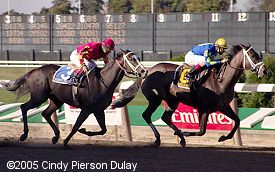 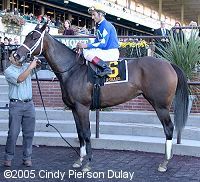 Ashado in the winner's circle. Winning trainer Todd Pletcher said, "You have to say now that she's one of the top mares -- maybe of all time. When you get one this good and they've had such a good career, you want to see them finish up on a winning note. It's very satisfying for our organization. This was a loaded race. Six grade I winners, Happy Ticket been beaten only once coming in, Society Selection and the unbeaten 3-year-old (Sweet Symphony). She beat everyone she you could beat today. We want to defend our title in the Breeders' Cup, but the earnings title would be a bonus." 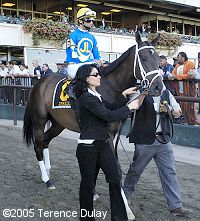 Ashado heads for the track and the post parade. Winning jockey John Velazquez said, "We went into the last race and we thought she was doing well. She just wasn't herself. Today in the paddock, she was beautiful, on her toes, but not sweaty. She was very good in the post parade. Here comes the other one (Happy Ticket), and I think I moved a little too soon. She had a so-so race last time, so she might have gotten a little bit late down the lane. I don't think she got a lot out of her last race. She's going back to the Breeders' Cup. She'll be tough." 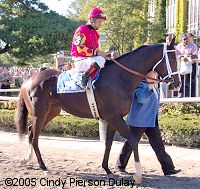 Second place finisher Happy Ticket leaves the paddock for the track. Her trainer Andrew Leggio Jr. said, "She never runs a bad race. It was never a concern that she could get the 1 1/8. I knew she could do that. My concern was the class. She had never run against this caliber of fillies and mares. This was the best she had ever run against. She proved herself here, and she is going to stay in New York for the Breeders' Cup Distaff." Her jockey Victor Espinoza said, "She ran very hard. I was stuck inside all the way around. In the stretch, I got out and she started running. She's really running good. She showed she can run with these fillies." 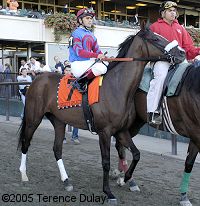 Third place finisher Society Selection heads to the track for the post parade. Her jockey Javier Castellano said, "She came up empty. Going around the turn, we were in striking position to Ashado. When I asked her to go, she didn't have that response or kick."