The highlight event on Breeders' Cup Preview Day at Belmont Park is the Grade 1 Jockey Club Gold Cup for the handicap division. A field of eight hopefuls entered the $1 million event at 1 1/4 miles on the main track as their final prep for the $4 million Classic in four weeks time. As expected, Travers Stakes winner Flower Alley was the 3-2 favorite and trainer Todd Pletcher wasn't taking any chances in Flower Alley's first start against older horses, entering stablemate Bishop Court Hill as the rabbit to ensure an honest pace. Also in the field were 3-1 second choice Lava Man, winner of the Hollywood Gold Cup, and third in the Pacific Classic to Borrego, the 9-2 third choice this afternoon.

Jockey Chantal Sutherland followed the stable instructions and rushed Bishop Court Hill to the front, but he had the unlikeliest of company as he battled head to head with Flower Alley through fractions of 23.59, 46.73, and 1:11.30, before Bishop Court Hill fell out of contention to finish last. Unfortunately for Flower Alley, he too succumbed to the fast pace and tired along the inside as the closers made their moves rounding the far turn. Borrego, who had stayed back in last place through the first six furlongs, swung out four wide under Garrett Gomez on the far turn, and easily circled the field, grabbing the lead at the quarter pole.

Through the lane, Borrego drew away to 7-length advantage with a furlong to go. 12-1 shot Suave made a late rally from sixth but was no match for Borrego, who easily held him off to win by 4 lengths in a time of 2:02.86. It was another 5 3/4 lengths back to 8-1 shot Sun King in third, and 5 more to favorite Flower Alley in fourth. Lava Man stalked the pace in third but had nothing in the stretch and finished seventh. 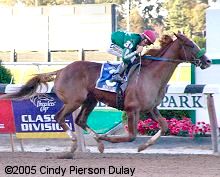 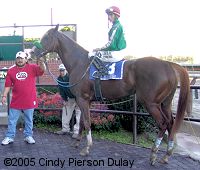 Borrego in the winner's circle. Winning trainer Beau Greeley said, "This is two `millions' in a row. When I saw :46, I loved it. He's a very honest horse. This was a very solid Grade 1. I never looked at the Breeders' Cup until right now. He's going to tell me in the morning. Today, I am delighted. I like to think I have the horse to beat. Saint Liam ran a great race (in the Woodward) and there are a lot of great horses out there but Borrego has won over the track. He is a very easy horse top train and he makes me look good. I thought he would win today, but I knew we had serious horses running in this race. He excels at a mile and a quarter. That was a lot of fun. He'll stay here for the Breeders' Cup (Classic, powered by Dodge)." 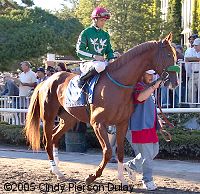 Borrego leaves the paddock before the race. Winning jockey Garrett Gomez, winning his second Grade 1 on the card, said, "I really wasn't planning to move as early as I did, but he was doing everything so easy. I came about six-wide and lead him on his way. I was a little leery when I did it because he's never been put in that circumstance before with me riding him. I didn't know how he was really going to respond to it. He was absolutely perfect. I wanted to settle him down late. We've got a month to the Breeders' Cup and I didn't want him to overdo it. " 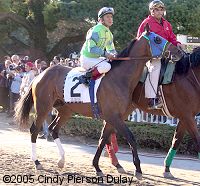 Second place finisher Suave heads to the track for the post parade. His jockey Edgar Prado said, "I didn't think he needed the lead, especially when I saw three others go after it. If we went up there with them, we could have set it up for someone else, and we may not have finished well. So, we just waited behind them. When I turned him loose, he kicked in and picked up the other horses. But no one was going to catch Borrego." Trainer Paul McGee added, "I thought he ran a good race. We'll see, but I think it's (the Breeders' Cup) is still on the radar. I'll get with the Siegels (owners) and make a decision.." 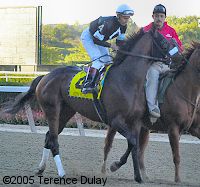 Third place finisher Sun King in the post parade. His trainer Nick Zito, said, "I think he could have been second today with no problem. We had him where we wanted him. My horse tries so hard, a gallant horse that he is, one of the better three-year-olds. The winner was fabulous, but I think he could have been second, and second to me is big in this race. We'll talk to Mr. Farmer and if he has a good month, why not (go in the Breeders' Cup)?" 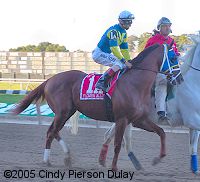 Fourth place finisher and beaten favorite Flower Alley in the post parade. His trainer Todd Pletcher said, "Flower Alley was just a little too fresh. I know everyone is going to say that the `rabbit' (Bishop Court Hill) is why he got beat. Flower Alley was just too rank. It had nothing to do with the `rabbit.' Johnny said that Bejarano (aboard Sun King) left the gate chirping, and Flower Alley went on the bridle too fast. He was either going to be locked up with Lava Man on the outside or Bishop Court Hill on the inside. It really didn't, in my eyes, have anything to do with the `rabbit.' I think we will try again. He ran a hell of a lot better than the other two that were up there with him."