Closing out Breeders' Cup Preview Day was the $750,000 Flower Bowl Invitational, a 1 1/4 mile trip around the inner turf course for older fillies and mares prepping for the Breeders' Cup Filly and Mare Turf. Nine went to post in this Grade 1 event with Melhor Ainda sent off as the 8-5 favorite off her close third place finish in the Beverly D last time out. Also in the field were 3-1 second choice Sand Springs, winner of the Diana Handicap last out, and 6-1 third choice Wonder Again, fourth in the Beverly D. Last year's Flower Bowl winner Riskaverse was back to defend her title, but she was ignored at the windows and dismissed as the longest shot on the board at 36-1 as she had not won since that race.

As expected, jockey Jerry Bailey took Sand Springs to the front and she set easy fractions of 24.73, 48.43, and 1:12.26 while loose on the lead. Going wide around the far turn, Melhor Ainda made her move and got within a length of Sand Springs at the top of the stretch through a mile in 1:36.29, but flattened out in the drive ending her challenge. Sand Springs still had the lead with a furlong to go, but Riskaverse, who had stalked the pace in third early, came on strong to get her head out in front for the hard-fought victory over the late-running Wonder Again in a time of 2:00.27 over the firm course. It was just a length back to 13-1 shot Film Maker in third, and 3/4 length more to the tiring Sand Springs in fourth. Favorite Melhor Ainda disappointed in seventh. Riskaverse is the only filly or mare to win back-to-back Flower Bowls.

Check out the other races on the card: Jockey Club Gold Cup, The Beldame, Joe Hirsch Turf Classic Invitational, and The Vosburgh. 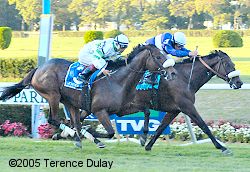 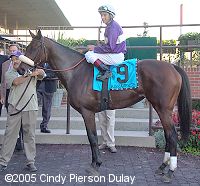 Riskaverse in the winner's circle. Winning trainer Pat Kelly said, "She loves Belmont. We've been playing catch-up all summer. She trained really well since the race at Saratoga. Usually, she has five or six races under her belt now, and she gets better in the fall. She's a great filly. She's the best filly I've ever had. I'm glad she bounced back and showed everyone who she is. Jose (Santos) ran a great race. The seam opened up, and he took advantage of it. Our old friend, Wonder Again, was second. It seems like they've been going at it since they were 2." 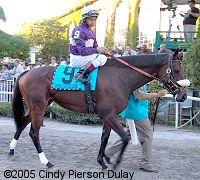 Riskaverse leaves the paddock for the track. Winning jockey Jose Santos said, "I loved my trip. I was very patient. I tried to get between the rail and Bailey's horse (Sand Springs) but Bailey had control of the filly. I decided to step out a little bit. She was very game. It was a great job by Pat Kelly. Pat told me the last time that she would be a little lazy at Saratoga, but she would be better in the fall." 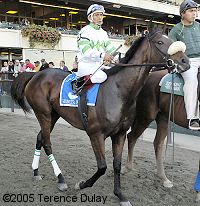 Second place finisher Wonder Again heads to the track for the post parade. Her trainer Jimmy Toner said, "She ran very good. She ran great, but what are you going to do. I guess the only thing you can say is that nice people won it. It's a tribute to what a marvelous job Pat (Kelly) has done with this filly. I know he's had his hands full with her all year. We're getting closer, and we have one more to go. So, we're not finished yet." Jockey Edgar Prado added, "She's run great this year, she just hasn't gotten lucky. I've got no complaints. She's a nice filly who is trying real hard. This will set her up for the Breeders' Cup." 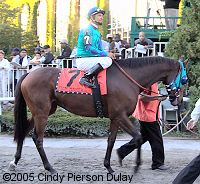 Third place finisher Film Maker leaves the paddock for the post parade. Her trainer H. Graham Motion said, "I just hope I can keep Pat (Valenzuela) on her. Nobody ever gets a chance to know her. Todd (Kabel) had trouble getting into the country this morning, and he couldn't make it. She ran huge. She's always right there." Canadian jockey Kabel, who rode Film Maker in her last start, had been named to ride but was replaced by Valenzuela the morning of the race. Jockey Patrick Valenzuela added, "She ran a good race. She couldn't get to the first two horses in time. She ran a good race. I can't complain." 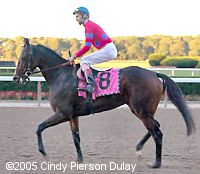 Seventh place finisher and beaten favorite Melhor Ainda returns after the race. Her jockey John Velazquez said, "She didn't break again. I should have just dropped her in. She was relaxing well behind horses. When she got to the turn, another horse hit her and pushed her to the outside. That made her rank. I didn't want to keep taking a hold of her, so I let her run on the backstretch. I got a chance to sit again on her, but she just didn't have it in the stretch."