The highlight of the Saratoga meeting is the $1.25 million Runhappy Travers Stakes (G1) featuring the best 3-year-olds on the east coast going 1 1/4 miles on the main track, with 48,213 fans packing the historic upstate oval. A field of 12 went to post under partly cloudy skies and temperatures in the low 70's, with Tacitus sent off as the 5-2 favorite off second place finishes in both the Belmont Stakes (G1) and Jim Dandy (G2). In to challenge him included 7-2 second choice Mucho Gusto, 2nd in the Haskell Invitational (G1) after winning the Affirmed (G3), and 9-2 third choice Code of Honor, winner of the Dwyer (G3) after placing 2nd in the Kentucky Derby (G1).

Tacitus and Mucho Gusto were quickest away through an opening quarter of 23.11 before jockey Joe Talamo put Mucho Gusto on the lead through fractions of 47.26, 1:11.21, and 1:35.49 presed by Tacitus and stalked by Tax. Entering the stretch, Mucho Gusto continued to lead through 9f in 1:48.30 but Code of Honor, 9th early under John Velazquez, came out 8 wide for room to take over the lead inside the 1/8 pole, drawing off to win by 3 lengths over Tacitus in 2:01.05. It was another 1/2 length back to pacesetter Mucho Gusto third. 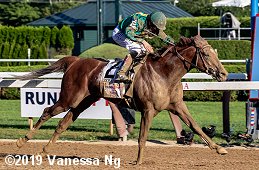 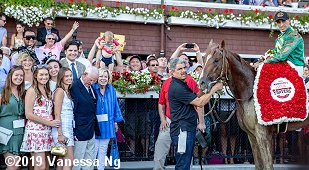 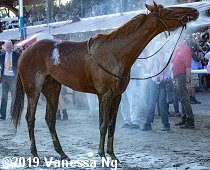 Left: Code of Honor in the winner's circle. Winning owner William Farish said, "It was just fantastic, and we had been hoping for him and looking for him to do what he did today. But it was better than we ever anticipated. We've been at this, planning for this, looking forward to this for a long time. And this was just a remarkable day in every way, particularly with this horse, with Shug. The whole show was what we've been praying for, and it all came to pass."

Right: Code of Honor gets hosed off after the race. Winning trainer Shug McGaughey said, "We were sitting where I thought we wanted to be, back there at the 3/8 pole. He wasn't doing anything yet, so I was a little bit worried there. But I think Johnny knows him now, and you have to let him be watching something to keep his focus. And I don't think he's got a real long run, I think he needs to get it done in a hurry because he's not one to get in a real long groove and run with another horse and stuff. So, we were able to do it. We had a decent pace in front of us. And Johnny did exactly what he had sort of portrayed to me in the paddock about -- he said he was going to, we were going to save some ground, go around the first turn, he was going to try to get him out, going down the backside and 3/8 pole, just try to have him in a position where we could make a run if we had a horse." 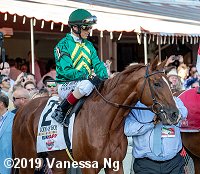 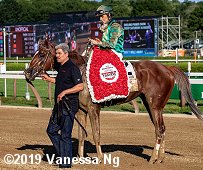 Left: Code of Honor heads out for the post parade. Winning jockey John Velazquez said, "I never had any doubts about distance as a problem, just him putting his mind to running. Today, I made sure, when I got him out to the clear, he responded right away, so I was very happy for him. Obviously, we've been looking for this kind of performance for a long time. He's a late foal, not really knowing what to do [even though he's] run some really big races. He's never really put it together until today."

Right: Code of Honor returns after the race. McGaughey added, "He's been a bit of a Jekyll and Hyde horse. Today, he put it all together. He trained really well. The Dwyer was a really good race, so we were hoping we were going to see what we saw. (Winning the Travers) doesn't get old, but it can't take that long again (21 years since his last win). The way he won today, you have to put him up there with them (for champion 3-year-old). We'll see what happens. You've got the Jockey Club Gold Cup down the road and there's some other spots. Where are we going to point him to, we'll let the horse tell us in the next week or so, and Mr. Farish and I will talk about it. And we'll figure out a game plan." 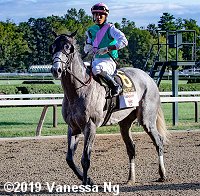 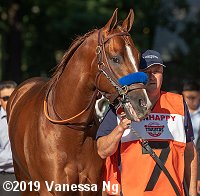 Left: Second place finisher and beaten favorite Tacitus returns after the race. Trainer Bill Mott said, "Really, we thought they'd go ahead and clear us. We thought that Mucho Gusto, Tax, they'd clear us and Looking At Bikinis, we thought might clear us. We made the choice beforehand to go ahead and try and get him in the race, let him break and if they want to try to outrun you, make them work for it a little bit. Our horse was just there. He got the rail trip. We thought when Mucho Gusto kind of went, you'd have thought he'd have come over to the fence but he stayed out, so that gave us the rail on the second turn. Hey, the winner came running. I had one eye on the winner and one eye on mine. It looked like there was a good chance we were going to outduel Mucho Gusto but the winner, I mean he rolled by pretty fast."

Right: Third place finisher Mucho Gusto in the paddock. Jockey Joe Talamo said, "I was surprised to see Tacitus that close, but we were going pretty easy. I stayed out to where we were both going easy enough. Turning for home, he really gave me a thrill when he opened up a little bit I really thought I was going to keep going. Every start I've ridden him he really lays it downs on them and that's all you can ask of a horse like him. Even in defeat he really tries hard and I'm proud of him. He still gives it to you. He's a horse that can run at 6 furlongs or like today 1 1/4."

The horses break from the gate for the Travers. Winning trainer of Code of Honor (post 2) added, "I think leaving the quarter pole I thought we had a pretty good chance. I knew they had been running up in front of us and I knew he was going to be finishing. Then at the eighth pole we got to him, I knew we were going to probably be able to outfinish him. But obviously in a horse race you never know what's going to happen. But at the three-eighths pole my confidence wasn't really high, but at the eighth pole it was really high."