The Travers Stakes Presented by Shadwell Farm (G1) is the highlight of the Saratoga summer meeting, and the 40,723 fans in attendance were treated to three other graded stakes races on Saturday afternoon, contested under ideal racing conditions. The most prestigious event on the undercard is the $250,000 NetJets King's Bishop Stakes (G1), a 7 furlong main track sprint restricted to 3-year-olds. J Be K was sent off as the 9-5 favorite in the field of ten, coming to Saratoga off a 2-race win streak including the Woody Stephens at Belmont and the Jersey Shore at Monmouth last time out. In to challenge him included the Vinery Stables entry of Kodiak Kowboy and Lantana Mob at 3-1, and Amsterdam runner-up Desert Key at 6-1.

42-1 longest shot Gentleman James was quickest out of the chute and led the field after 1/4 in 22.39 before favorite J Be K, who was close behind, poked his head in front halfway down the backstretch to get the half in 44.73. Turning for home, J Be K continued to lead, getting 3/4 in 1:09.30, but 7-1 fifth choice Visionaire, last down the backstretch, unleashed a four-wide sweep on the turn and closed with a rush to win going away by 2 1/4 lengths in 1:21.94 over the fast track. A blanket finish ensued for place, as runner-up Desert Key nosed out 13-2 fourth choice I'm So Lucky in third, who in turn nosed out Lantana Mob in fourth. Favorite J Be K faded late to finish sixth beaten 7 lengths. 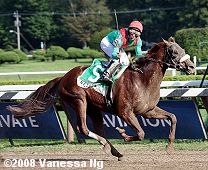 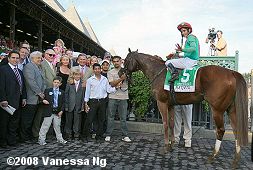 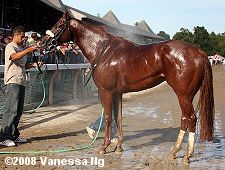 Left: Visionaire in the winner's circle. Winning trainer Michael Matz said, "It made me a little bit nervous when he was that far back, but when I saw the 44 and 1:09, and knowing the last time he got up at 6 1/2 furlongs, I didn't know if he was going to win, but I knew then he'd make a run of it. The horse has just one style of running and it can get a little nerve-wracking. All these horses were real good. They all had big numbers. We just had a horse with a lot of heart and he proved it today. We're going to enjoy this one for a while."

Right: Visionaire gets hosed off before heading back to the barn. Winning jockey Alan Garcia said, "There was a little more pace than last time. My horse, he came flying." The win gave Garcia five on the card, including the Bernard Baruch aboard Shakis. He added, "That's so great. I can't believe it." 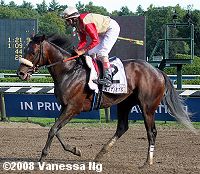 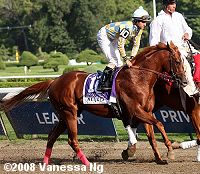 Left: Second place finisher Desert Key returns after the race. The 6-1 third choice sat fourth down on the rail early under jockey John Velazquez, saved ground on the turn, and closed well to get second in a blanket finish for place. The James Jerkens trainee improved his record to 2 wins, 3 seconds, and 0 thirds in 6 starts, earning $163,490 for owner Centennial Farms.

Right: Third place finisher I'm So Lucky in the post parade. The 13-2 fourth choice was slow out of the gate but quickly moved up to fifth on the backstretch under jockey Robby Albarado, and closed willingly through the stretch, just missing place money by a nose but beaten 2 1/4 lengths for the win. The John Ward Jr. trainee improved his record to 3 wins, 0 seconds, and 2 thirds in 6 starts, earning $131,546 for owner John C. Oxley. 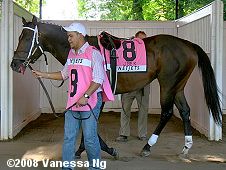 Sixth place finsher and beaten favorite J Be K in the paddock before the race. His jockey Garrett Gomez said, "I did not have a good trip. My horse did not respond like normal. I tried to get him to move down the stretch but I never got the response I was looking for." 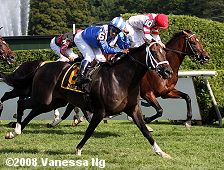 The $200,000 Bernard Baruch Handicap (G2) featured a field of ten older horses going 1 1/8 miles on the inner turf course. Proudinsky was sent off as the 5-2 favorite despite finishing a distant 11th in the Manhattan Handicap last time out. Also in the field were 3-1 second choice Thorn Song, third in the Fourstardave in his last start, and 6-1 third choice Shakis, ninth in the Manhattan last out and winless since this race last year.

Jockey Julien Leparoux sent Thorn Song to the front right away and he set fractions of 23.40, 48.17, and 1:11.67 over the firm course, while being stalked by 13-2 fourth choice War Monger the whole way. Thorn Song maintained a clear lead into the stretch but Shakis, eighth early, was just hitting his best stride. Entering the lane four wide, he closed with a rush down the center of the course, passing the tiring pacesetter to get up by 3/4 length over War Monger in 1:46.78. It was another 3/4 length back to late-running 9-1 Operation Red Dawn third, who finished a head in front of pacesetter Thorn Song fourth. Favorite Proudinsky raced in seventh early but showed no late rally, finishing sixth.
Results chart 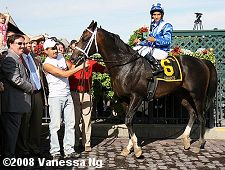 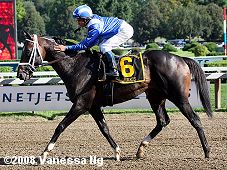 Left: Shakis in the winner's circle with trainer Kiaran McLaughlin on the far left. McLaughlin said, "He's very sound and he trains good. We just wish they ran the Bernard Baruch twice a year. He's really been unlucky. His first race back, he was 10-wide at Keeneland. Then, we went to Pimlico and he had a rough trip. He ran back in three weeks on short rest going 10 furlongs. (But) this is what he wants to do. Alan did a great job. I didn't think we had any chance at the top of the stretch. I was afraid that they weren't going fast enough up front; I was looking for a faster pace. This just worked out great. Sheikh Hamdan is a great owner and it is nice to win for people who are so good to you."

Right: Shakis returns after the race. Winning jockey Alan Garcia said, "I'm very happy. Mr. McLaughlin has done a wonderful job with this horse. He gave me the instructions and told me to forget about his last two races. He's in better form. He was flying at the end. Everything went as planned." 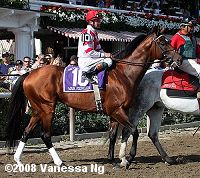 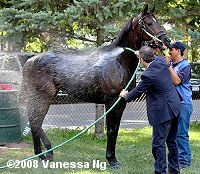 Left: Second place finisher War Monger heads out for the post parade. His trainer Bill Mott said, "I thought he ran an incredible race from the outside post. I was worried about him breaking from the 10 post. He was in good position throughout. Coming for home, he kicked it in and ran hard."

Right: Third place finsher Operation RedDawn gets hosed off in the paddock before the race to help cool him down. The 9-1 shot raced far back while saving ground on the hedge around both turns under jockey Ramon Dominguez, then came out wide into the stretch and closed well to get third. The Christophe Clement trainee improved his record to 4 wins, 8 seconds, and 4 thirds in 18 starts, earning $258,307 for owner-breeder Dion A. Recachina. 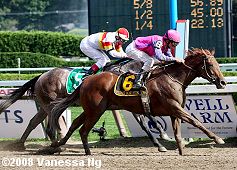 Kicking off the stakes action on Travers Day was the $100,000 Victory Ride Stakes (G3) for 3-year-old fillies sprinting 6 furlongs on the main track. Azalea Stakes winner Indyanne was sent off as the 2-5 favorite in the field of six, coming to Saratoga undefeated in four career starts, each win by open lengths. In to challenge her included 6-1 second choice Sly Storm, winner of the Mongo Queen at Monmouth last out, and 7-1 third choice Informed Decision, a 6 length allowance winner at Keeneland in April.

Indyanne lunged at the start and briefly trailed but quickly got to the lead, setting fractions of 22.13 and 45.00 down the backstretch while battling on the pace with 14-1 J Z Warrior. Turning for home, jockey Russell Baze asked Indyanne for run and got it, as she opened up a 1 1/2 length lead at the 1/8 pole after 5 furlongs in 56.89. However, the fast pace battle up front took its toll, as 11-1 Porte Bonheur, fifth early, closed well through the stretch and caught the heavy favorite in the final 50 yards for the hard-fought 1/2 length victory in 1:09.51. It was a long 3 lengths back from Indyanne to late-running Informed Decision third.
Results chart 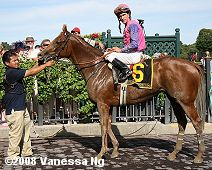 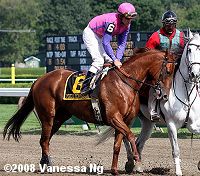 Left: Porte Bonheur in the winner's circle. Winning trainer David Duggan said, "I have no complaints. I'm very happy. I'll take it any day of the week. It's better than losing. She has proven that she is legitimate. I was nervous when I saw Indyanne still there. I knew we were doing good, but I was afraid of her. We'll look at the Gallant Bloom against older fillies and mares at Belmont."

Right: Porte Bonheur in the post parade. Winning jockey Ramon Dominguez said, "I was pleased with the way she relaxed and the pace they were setting. I wasn't certain we were going to get up, but I liked my chances and she showed a lot of heart." 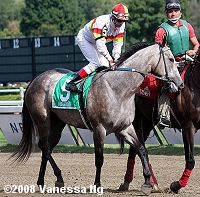 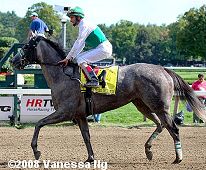 Left: Second place finisher and beaten favorite Indyanne in the post parade. Her trainer Greg Gilchrist said, "I'm not going to take anything away from the winner. She ran a heck of a race. But I think the start cost us a neck. Russell had a choice: he could sit there, but the fence opened up and he went ahead and let her run. That's just horse racing. That's the way it comes up sometimes." Her jockey Russell Baze said, "We should have won it. My filly was standing good in (the gate), but she wasn't standing quite as good as I would have liked her. It was 'go' time and I didn't have enough time to re-adjust her footing in there. She's always been a little bit slow leaving the starting gate, and today was just a little bit more so."

Right: Third place finisher Informed Decision returns after the race. The 7-1 third choice broke slowly, saved ground on the turn under jockey John Velazquez while near the back of the field, then launched a rally along the rail entering the stretch and closed well to get third. The Jonathan Sheppard trainee improved her record to 3 wins, 0 seconds, and 1 third in 5 starts, earning $103.967 for owner Augustin Stables.

On to the Travers results and photos won by Colonel John