The $1 million Travers Stakes Presented by Shadwell Farm (G1) is the highlight of the Saratoga meeting, featuring some of the best 3-year-olds in the country going the classic distance of 1 1/4 miles on the main track. A crowd of 40,723 filled the historic upstate New York oval, enjoying sunny skies and temperatures in the 80's. A field of twelve went to the gate in the main event on Saturday afternoon, with Pyro sent off as the lukewarm 7-2 choice, exiting a close second in the Jim Dandy at Saratoga after winning the Northern Dancer at Churchill Downs in June. In to challenge the Steve Asmussen trainee included 4-1 second choice and California invader Colonel John, third in the Swaps at Hollywood last time out for trainer Eoin Harty, and 5-1 third choice Mambo In Seattle, winner of three straight races including the restricted Henry Walton Stakes at Saratoga last time out.

Like he did when he won the Belmont, jockey Alan Garcia sent 13-1 shot Da' Tara to the lead immediately, and he set the pace of 23.91, 48.06, 1:12.12, and 1:37.17 while being stalked by 43-1 longshot Tizbig for the first mile. Favorite Pyro was unhurried near the back of the field for the first 3/4 mile, while Colonel John, who broke in the air at the start, sat up close to the pace in fourth saving ground the whole way. Da' Tara stubbornly held onto the lead into the stretch, but tired badly after the 1/8 pole to eventually finish fifth. Colonel John launched his bid at the top of the lane and took over from the tiring Da' Tara in mid-stretch. Mambo in Seattle, unhurried early, came into the lane 6 wide and closed well through the stretch, but Colonel John held him off at the line for the hard-fought victory by a nose in 2:03.20 over the fast track. It was a long 5 1/4 lengths back to late-running favorite Pyro third. 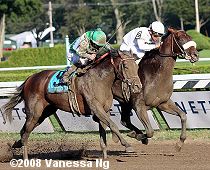 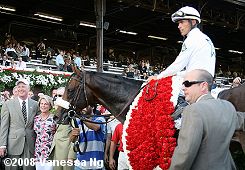 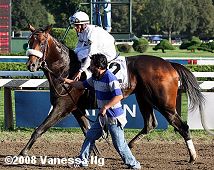 Left: Colonel John in the winner's circle with William Casner, chairman of owner-breeder WinStar Farm LLC, on the far left. Casner said, "The Travers, at least in my opinion, is certainly the second most prestigious three-year-old race, next to the Kentucky Derby. It is a race for the ages. I never doubted that this horse could run on dirt. Eoin had the utmost confidence on him and he did a tremendous job of training this horse. And Garrett put a stellar ride on him and got it done. I always say winners find a way to win, and that's what Garrett did today. He found a way to win when it was deep in the race. Horses are kind of like people, they have to be able to overcome adversity. That's one thing I am so proud about this horse. He did overcome some adversity at the end of the lane. When both of those horses hit the wire, we were just hoping to God that we were able to prevail."

Right: Colonel John circles after the race. Winning trainer Eoin Harty said, "We did have a less than ideal trip in the Kentucky Derby, and not to take anything away from Big Brown that day because it was a stellar performance. I'm not sure Colonel John could have beaten him anyway. But I would certainly love to get Big Brown somewhere down the road, hopefully, at the Breeders' Cup. I certainly never lost any confidence in him. When you've been around horses for a long time, the really good ones do things very differently than the usual ones. This one, from Day 1, had shown that. He never did anything ever to disappoint me. It was an unfortunate thing in Kentucky. In hindsight, the race he had in the Swaps was a very good race. He's a beautiful horse to be around. He has a beautiful personality, and he's never done anything to make me feel bad. I'm just fortunate. This horse, I could put another prep into him, but I think I could probably bring him to the Breeders' Cup on works. That's something I would have to discuss." 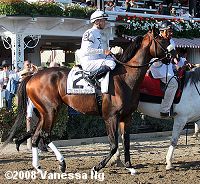 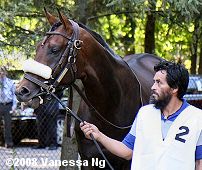 Left: Colonel John heads out for the post parade. Winning jockey Garrett Gomez said, "I knew I was going to have a tough trip. I had a great trip as far as saving ground, but I knew all the horses would be in tactical, stalking position, somewhere on my hip or right near me. So, I had my hands full trying to weave my way in and out. I was just going to have to bide my time and go through holes without using my horse. When he got left a little bit, then I thought, Oh, no. I squeezed him just a little bit to get him into the race. From then on, the race pretty much unfolded the way I wanted. The way he ran today was a heck of a performance. I've always liked him, I was fortunate enough to be the first one to ride him in a race. Eoin was high on him then. It took me a while to get back on him and I got to watch him kind of develop. It's been a real trip for me, to have him is unbelievable. The kind of trip and what he did today, it takes a special horse to do what he did because he got left a little bit. He was inside and then I got bounced around a little on the turn and then I had to jump over heels. To do that after going a mile, he still jumped up on his feet and started to quicken it and lengthen his stride. It shows that he is right up there with the top of them."

Right: Colonel John in the paddock before the race. 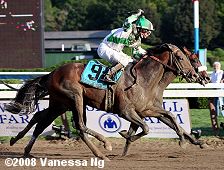 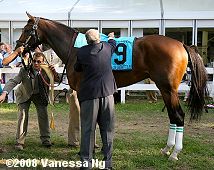 Left: The actual finish of the race, but you can really only see second place finisher Mambo in Seattle with just Colonel John's nose. His jockey Robby Albarado said, "He ran an amazing race, and I want to thank Mr. Farish (owner) and Mr. Howard. I thought I had it. It never feels good to lose. I just got beat."

Right: Trainer Neil Howard saddles Mambo in Seattle in the paddock. Howard said, "He ran well. I'm grateful to train a horse like him. I thought he went well. He had to go around horses and he got beat by one of the Kentucky Derby favorites. I really couldn't tell if we had won the race." 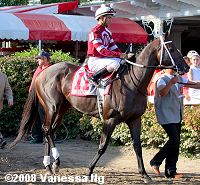 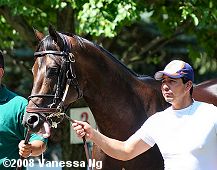 Left: Third place finisher and beaten favorite Pyro heads out for the post parade. His jockey Shaun Bridgmohan said, "I thought I had a fabulous trip. There was a little traffic at the top of stretch and I had to weave through a little bit. I thought he ran very well."

Right: Pyro schools in the paddock at Saratoga on Thursday. His trainer Steve Asmussen said, "He ran a good race. Shaun did a great job to get through as much traffic as he did from as far back as he came. He did a good job to earn third late."

On to the Travers undercard stakes results and photos