The $400,000 Personal Ensign Stakes (G1) is the premier race at Saratoga for the distaff division. Traditionally run on the Friday before the Travers, it features the best older fillies and mares of the east coast. Only 6 went to post in this 1 1/4 mile main track feature, with champion Ginger Punch sent off as the 3-5 favorite in her first start at this distance, entering the race off a 3 race win streak including the Louisville, Ogden Phipps, and Go For Wand, all handicaps. In to challenge the Frank Stronach homebred included 2-1 second choice Unbridled Belle, third in the Delaware Handicap last time out, and 9-1 third choice Golden Velvet, second in the Ogden Phipps to Ginger Punch after winning the Sixty Sails at Hawthorne.

10-1 shot Lemon Drop Mom was quickest away and opened up a clear lead first time past the stands getting the initial quarter mile in 24.62 before conceding the lead to Golden Velvet entering the backstretch. Golden Velvet got the half in a slow 49.85 and 3/4 in 1:13.66, while being stalked by both Lemon Drop Mom and Unbridled Belle. Entering the lane, Unbridled Belle moved up to poke her head in front after a mile in 1:37.87, but her lead was short lived. Lemon Drop Mom came on late to get the lead at the 3/16 pole, but Ginger Punch, who sat in fourth early, was closing with every stride. Ginger Punch got up in the final jump to get the victory by a nose in 2:03.37 over the fast track. It was a long 2 3/4 lengths back to Unbridled Belle third, and 8 more to the rest of the field. 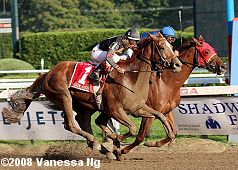 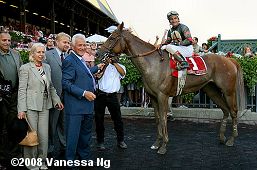 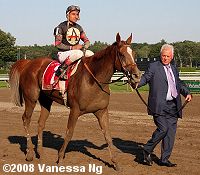 Left: Ginger Punch in the winner's circle with trainer Bobby Frankel on the far left. Frankel said, "I thought we got beat. She got the perfect bob. Today and in her last race, she had to overcome a lot of things. She's in heat and I was a nervous wreck. When I saw her in the paddock, she was (acting) as if she was ready to be bred. By the way Rafael was putting her in a drive, I thought she had a lot to do. As soon as she got to the 1/4 pole, I knew she had a chance. We're thinking about the Beldame. We want to see how she comes out of this race." 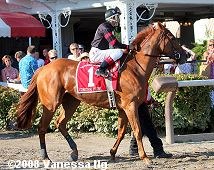 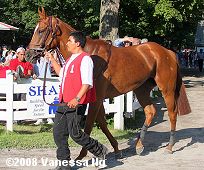 Left: Ginger Punch heads out for the post parade. Winning jockey Rafael Bejarano said, "For me, she is a super filly. She tries all the time. As soon as I got to the turn, she was kind of tired, but as soon as she saw the other filly pass me in the final furlong, she kept coming back again. This race was very close and very scary. The other horse tried hard, too, but my horse doesn't quit. She runs 'til the end."

Right: Ginger Punch in the paddock before the race. 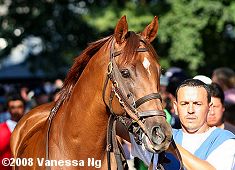 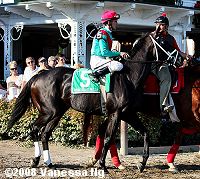 Second place finisher Lemon Drop Mom in the paddock. Her trainer Tim Ritchey said, "I thought we won. It came down to a head bob. She ran the best race of her career against a champion. She just keeps moving forward, after running in minor stakes, up to graded stakes." Her jockey Jose Caraballo said, "It was close, very close, and I was hoping it went my way. I had a good trip and she was there the whole time. She responded, but I just got beat by a nice filly."

Right: Third place finisher Unbridled Belle heads out for the post parade. The 2-1 second choice stalked the pace three wide in third for the first 3/4 mile under jockey Ramon Dominguez, closed well to get the lead at the top of the stretch, but weakened late to hold third beaten 2 3/4 lengths. The Todd Pletcher trainee improved her record to 6 wins, 3 seconds, and 3 thirds in 17 starts, earning $1,509,340 for ownership group Team Valor. 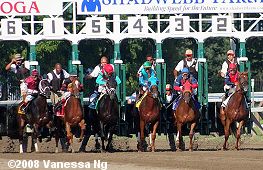 The horses break from the gate for the 2008 Personal Ensign Stakes (G1) at Saratoga Race Course.