The highlight of the Saratoga meeting is the Travers Stakes, and the stakes action on Travers week kicked off on Thursday with the $200,000 Ballston Spa Handicap (G2), a 1 1/16 mile event on the turf for older fillies and mares. Just five went to post before the live audience of just 18,465, with last year's winner Wait a While sent off as the 4-5 favorite despite finishing 7th in the Diana Handicap last time out. In to challenge the Todd Pletcher trainee included 3-1 second choice Rutherienne, third in the Diana, and 7-2 fourth choice Sharp Susan, winner of the Dr. James Penny Memorial at Philadelphia Park last time out.

Sharp Susan was allowed an uncontested lead of as many as 3 lengths setting a quick pace of 23.93, 47.08, and 1:10.39 over the firm course, while Wait a While stalked her in second the whole way. Turning for home, Sharp Susan tired badly to eventually finish fourth, as Wait a While easily took over the lead at the 1/4 pole. 10-1 Carriage Trail, third early, put in a mild bid through the stretch but Wait a While easily held her off by 1 length, completing the trip in 1:39.70. It was another 1 1/2 lengths back to Rutherienne third. 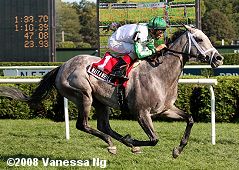 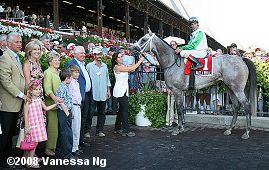 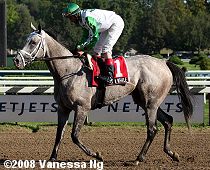 Left: Wait a While in the winner's circle with trainer Todd Pletcher on the left. Pletcher said, "I think firm turf is the biggest key. We kind of had everything working against us last time (in the Diana). We had an outside post and we were hung out wide all the way around there. It was actually a little better race than it looked, and it came up such a tough race. The ground was just a touch soft that day, and I think that having that race under her belt set her up well for today. We thought we would inherit the lead. It looked like (Sharp Susan) was the only one capable of doing that, and when she did, Johnny made the right move to let her go. And we got a perfect trip from there. She's a special filly. She was a champion at 3 and she's won some tremendous races. Two Ballston Spas and her Lake Placid as a 3-year-old were awesome races. This is her fourth year at Saratoga, so when you have one that long, it gets a little extra special."

Right: Wait a While returns after the race. Pletcher said Wait a While will start next in the Yellow Ribbon at Santa Anita. 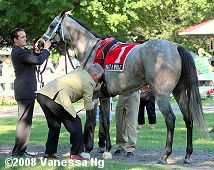 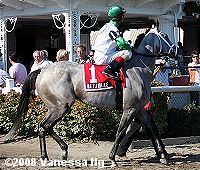 Left: Trainer Todd Pletcher tightens the girth on Wait a While in the paddock.

Right: Wait a While heads out for the post parade. Winning jockey John Velazquez said, "I rode her once last year. She came back from a layoff, and it took more than a year to get back on her. She did really well. She did everything good. She did whatever I wanted to get my position. When I asked her, she went right away." 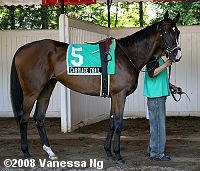 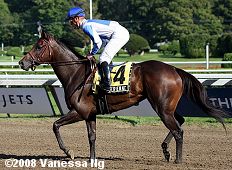 Left: Second place finisher Carriage Trail in the paddock before the race. The 10-1 fourth choice was reserved in third for the first 5 furlongs under jockey Edgar Prado, came out wide on the turn to threaten but was no match for the winner. The Shug McGaughey trainee improved her record to 5 wins, 2 seconds, and 3 thirds in 14 starts, earning $334,628 for owners and breeders Stuart Janney and Phipps Stable.

Right: Third place finisher Rutherienne returns after the race. The 3-1 second choice trailed the field down the backstretch under jockey Julien Leparoux, picked up the pace on the turn, then passed the tiring pacesetter Sharp Susan at the top of the lane to get third beaten 2 1/2 lengths. The Christophe Clement trainee improved her record to 9 wins, 0 seconds, and 4 thirds in 15 starts, earning $872,255 for owner-breeder Virginia Kraft Payson. 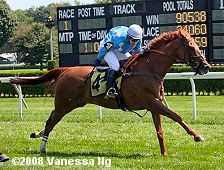 The first race on Thursday was the $70,000 Michael G. Walsh Novice Stakes, contested at 2 3/8 miles over the jumps for four year olds and older who had not won over jumps prior to September 1, 2006. 13-1 shot Red Letter Day was loose on the lead by as many as 6 lengths for the first two miles, then entering the stretch, 5-2 second choice The Price of Love, who had saved ground on the hedge the whole way, took over the lead after the final jump, and was all out to hold off late-running 7-5 favorite Dynaski by a length in 4:41.40 over the firm course. It was another neck back to 3-1 third choice Seer to complete the blanket finish.
Results chart from DRF 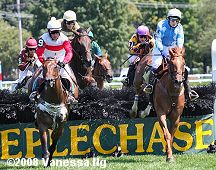 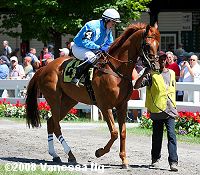 Left: The horses go over the last jump with eventual winner The Price of Love on the inside and second place finisher Dynaski on the outside.

Right: The Price of Love in the paddock before the race with Danielle Hodsdon up. 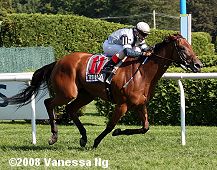 The $80,000 Old Red Stakes was restricted to older fillies and mares who had not won a graded stakes on the turf this year. The 10-horse field contested this 1 mile inner turf event. 6-1 Trouble Maker sat in fourth off the pace set by 21-1 Taletobetold, then surged to the lead at the top of the stretch and was all out to hold off late-running 7-1 Lady Carlock at the line, completing the trip in 1:37.33 over the firm turf. It was just 3/4 lengths more back to 23-1 longest shot Final Refrain third, while 3-1 favorite Waquoit's Love was a neck back in fourth. The win broke the Saratoga drought for trainer Tom Albertrani, who came into the race with just 4 seconds and 6 thirds in 19 starts.
Results chart from DRF 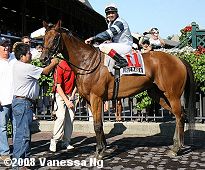 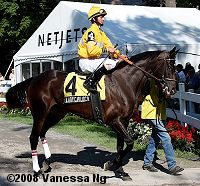 Left: Trouble Maker in the winner's circle with jockey Eibar Coa up.

Right: Second place finisher Lady Carlock heads out to the track before the race. 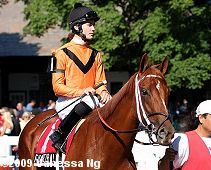 Third place finisher Final Refrain in the paddock before the race.