The highlight of the Tampa Bay Downs racing season is the $400,000 Lambholm South Tampa Bay Derby (G2) at 1 1/16 miles on the main track. It is the major local prep for the Triple Crown series and worth 50 points to the winner as part of the Kentucky Derby Championship Series. Conditions were excellent at the Oldsmar oval, with 10,021 on hand under sunny skies and temperatures in the mid 60's, with the track fast and the turf course firm. Sole Volante was sent off as the 3-2 favorite in the field of 12 off his win in the Sam F. Davis (G3). In to challenge him included 5-2 second choice Chance It, winner of the Mucho Macho Man, and 6-1 third choice Spa City, a maiden winner last out. 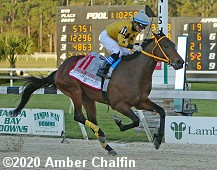 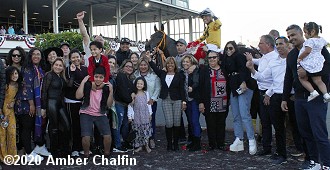 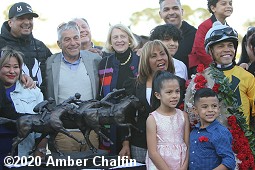 Left: King Guillermo in the winner's circle. Winning owner, retired Major League Baseball player Victor Martinez said, "My dad died when I was 6, and I always wanted to have a horse named for my dad. This is absolutely something else. I thank God for this opportunity and putting a great horse in my hands. My mom (Margot, also in the winner's circle) taught me how to dream. She taught me dreams are for free. We believed in this horse and he made our dream come true." 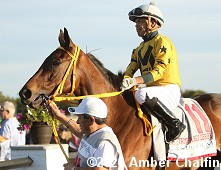 Left: King Guillermo heads out to the track before the race. Winning jockey Samy Camacho said, "I hope he is going to the Kentucky Derby (the horse will need to be late-nominated). I'm so happy, I say thank you to God and all the team – Mr. Juan Carlos Avila, the trainer, the owner, Victor Martinez, and everybody who made this dream possible. From the 3/8-mile pole I had a lot of horse and I was worried a little about Chance It and Sole Volante, but I had a lot of confidence in my horse because he was doing really well in the mornings and he felt strong."

Right: King Guillermo heads back to the barn. 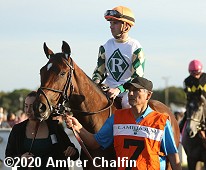 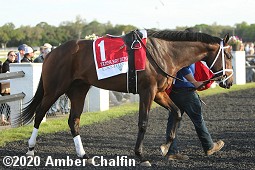 Right: Third place finisher Texas Swing heads out to the track before the race. The Todd Pletcher trainee improved his record to 1 win, 0 seconds, and 1 third in 3 starts, earning $48,600 for owner Harrell Ventures LLC. 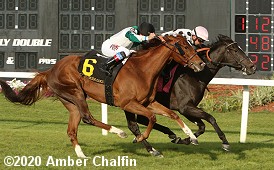 Immediately before the Tampa Bay Derby, a field of 12 three-year-old fillies went to post in the $200,000 Florida Oaks (G3) at 1 1/16 miles on the turf. Allowance winner Outburst was the 5-2 favorite over 7-2 New York Groove, winner of the Presque Isle Debutante and the Glorious Song, and 11-2 Walk in Marrakesh, unraced since a close 2nd in the Natalma (G1). 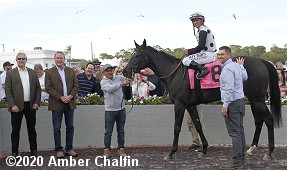 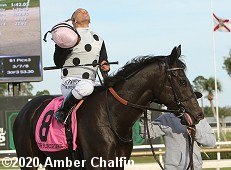 Left: Outburst in the winner's circle. Winning co-owner Terry Frey said, "Coming in, I was just hoping she had a chance. It's just fantastic that she won. There were some great horses in there and for her to come in and run a race like this is just so exciting. I'll tell you what, my heart is still beating like crazy. (Walk In Marrakesh) was running like crazy and I thought maybe (Outburst) had had enough and then it was like, I think she made it – and she did. I was very happy."

Right: Winning jockey Javier Castellano celebrates aboard Outburst. Castellano said, "I saw the replay from the last time the horse ran here and she was very impressive. I liked the way she finished that day. She is so quick out of the gate, you could see she (almost) beat the gate today and I ended up on the lead. I tried to ride the European style and come from behind and stalk behind the speed, but she never gave me the opportunity to do that. But what I really liked was the second quarter-mile, the way she slowed down and relaxed. I loved the way she did it and I liked the way she finished – very impressive – and I think there is a lot to look forward to." 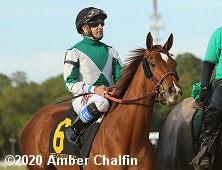 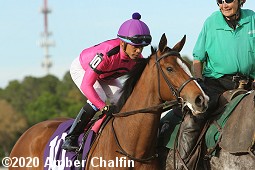 Left: Second place finisher Walk In Marrakesh in the post parade. The Ignacio Correas trainee improved her record to 3 wins, 3 seconds, and 1 third in 7 starts, earning $117,135 for owner-breeder Merriebelle Stable. 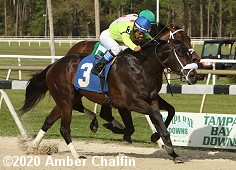 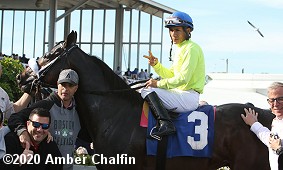 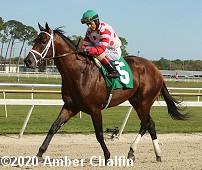 Left: Winning trainer Juan Carlos Avila said, "It's a great thrill. I've won 12 graded stakes in Venezuela but this is my first in the United States 9the second was soon to come). We're hoping he comes out good out of the race and we're going to look for better races." Jockey Paco Lopez added, "He's a very nice horse. I talk to Avila all the time and ask him ‘Put me on that horse, please,' and finally he did the last time. Today he ran very good and at the 1/8-mile pole I didn't need to hit him because he was trying very hard. He had to be tough to beat (runner-up King for a Day)."

Right: 2nd place finisher and beaten favorite King for a Day returns after the race. The Todd Pletcher trainee improved his record to 3 wins, 1 second, and 1 third in 7 starts, earning $260,550 for owner-breeder Red Oak Stable. 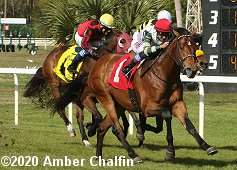 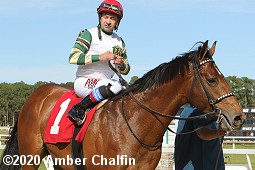 Ben Trask, assistant to winning trainer Mike Stidham said, "Everything went just about as planned. When I saw the half-mile in 47 (47.59 seconds), I thought that was probably beneficial to us to have a little bit of pace to run at. We gave him a little bit of time after last year; we just wanted to freshen him a little because he ran hard as a 2-year-old. It all worked out today." Jockey Joe Bravo added, "He left the gate really fresh, and my main thing was to try to hold his position and keep him relaxed. He was breathing underneath me really comfortably into the first turn and gave me a lot of horse to play with turning for home. My main objective was to stay clear, so I kind of got him to the outside of horses for his run. But Mike Stidham did all the hard work."