It's Ken Burns meets Frank Capra in the inspirational true story of Seabiscuit, the little horse who could.

This inspirational movie, based on Laura Hillenbrand's bestseller, follows a half-blind ex-boxer (Tobey Maguire), a mustang breaker (Chris Cooper) and a millionaire (Jeff Bridges) as they bring their knobby-kneed, undersized racehorse, Seabiscuit, to win Horse of the Year honors in 1938. But the movie is not just about a horse; the horse's personal story of triumph over tragedy mirrors that of our nation in that era.

Gary Ross, who directed the nostalgic hit Pleasantville, does an admirable job in faithfully adapting Hillenbrand's weighty, well-researched tome. He sets the story up slowly and thoroughly, introducing each main character to us fully before introducing them to each other. Personally, I found that this part went on a bit too long but then again, I am very familiar with the subject matter being a lifelong horseperson and having read several books about Seabiscuit, including the source material. While there is a lot of setting up, it's all in very short blips.

There are approximately 500 scenes in the movie, which is way above average. This includes several horseracing scenes. The horse racing scenes are much-touted as being never-before-seen "in the action" -- I don't mind being in the action once in awhile, but the claustrophobic nature of the scenes got to be a bit much for me. I would have welcomed a long shot once in awhile because without a wide view, there is no excitement in watching the horses as they all vie for top spot. I could also have done without so many close-ups of bony jockey butts in the air.

The only other complaint I have is about Randy Newman's overly dramatic score. OK, that's it. Now, on to the praise (and this Oscar-worthy film does deserve lots).

While Tobey Maguire is considerably younger than the real jockey Red Pollard was at the time he met Seabiscuit, it doesn't detract from the story. Maguire is completely believable as the rough-hewn, world-weary, poetry-spouting jockey whose greatest desire, even at the risk of his own life and limb, was to win races with Seabiscuit. Real life Hall of Fame jockey Gary Stevens plays another rider, George Woolf, and his friendly, adversarial chemistry with Maguire comes across perfectly, mirroring the relationship between the two real jockeys they portray. Another actual jockey, Chris McCarron, also has a small role in Seabiscuit. McCarron was the race designer, and even if you're not crazy about the extreme close-ups, you will know that the races were filmed as authentically as possible -- even the riders shouting to each other in the heat of finish line battle, is true. 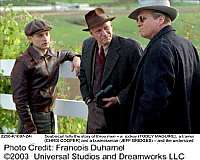 Academy Award winner Chris Cooper plays 'Silent Tom Smith', Seabiscuit's trainer. While he doesn't have an awful lot to say in the movie, Cooper gives a quiet, electric performance that is so subtle, yet so memorable. Jeff Bridges almost has the flashiest role in the film, playing the unflagging promoter and owner of Seabiscuit. He does a wonderful job. The flashiest role definitely belongs to the incomparable William H. Macy, who plays a Spike Jones'esque radio personality called Tick Tock McGlaughlin -- he practically steals the show with his hilarious antics. Ross does a magnificent job of tying all these characters together, expertly weaving them through the mane of the horse who stands at their center.

There were 15 horses who played Seabiscuit for various scenes (a few for racing, one for close-ups, one for acting-up scenes, one for lying down, etc.) and I have to give kudos to McCarron, who handpicked each animal, and to Ross, who directed them to perfection. Most solid bay Thoroughbreds look pretty much the same, but there are always little differences -- in this case, the changing of the horses is as seamless as possible. You never find yourself yanked out of the movie thinking, "Hey, his tail was short a minute ago, and now it's long." For once, the filmmakers don't assume that all horses look alike to the audience.

Seabiscuit is a feel-good, feel-Oscar drama being released in a summer of popcorn flicks and sequels -- here's hoping it crosses the finish line first!

With the movie coming up soon, the amount of Seabiscuit information and, of course, merchandise is booming. Here are some links to just about anything Seabiscuit you could want to know or own.