Q: You always seem to play larger than life characters, like the President and Preston Tucker, and now Charles Howard. What is that like for you?

Jeff:  I approach them the way I approach any character. I think about different aspects of myself that I might use for it or people I know that I might use. I always keep my eyes open for people I don't know that might inform the characters. But, for the guys you said and this character, I used my father [Lloyd Bridges] quite a bit who had sort of an aspect of him that reminded me of these guys. He's very gregarious. You ever talk to my dad? Even in his work you kind of see it. Like Howard, he was a big champion of the underdog and would see the best in people and enjoy nurturing the talents that he saw. 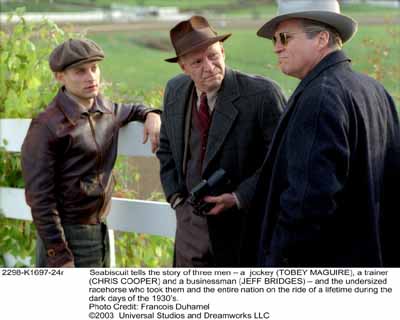 Q: What did you know about Seabiscuit before doing this film?

Jeff:  Just that he was a famous racehorse. Didn't know too much other than that. On racing in general, I used to take my grandfather here when I was a teenager. He would go three or four times a week. He was a big race fan and, as a matter of fact, the way this whole story of Seabiscuit came to my attention was that my cousin Kathe Flinders called me when the book came out and said, ‘I just read this book. It's so great. You've got to play this part. It would make our grandfather up in Heaven so happy if you do this'. I said, 'Oh well, maybe they'll write a script someday.' And years later, I got to call and say, ‘You're prophecy came true, Kath. I'm doin' the thing'. She would visit on the set and just loved it.

Q: Tobey and other Chris Cooper went through some big transformations for the part but you stay kind of similar to the way you look. Were you tempted to change more?

Jeff:  Actually, I went through a lot of stuff. I gained quite a bit of weight. I did my hair gray and the make-up was so good… you don't see it but if you put two pictures against each other you would. The guy Thomas Nellen who did the make-up and Sue Jermaine who did the hair, it's so well done that you don't notice. It's kind of seamless.

Q:  Did you, Tobey and Chris get together and talk about your parts? Or did you do it independently/

Jeff:  Pretty much independently. There wasn't too much rehearsal in the movie. All of the actors were open to ideas and Gary [Ross] was too. Different ways it might be. It wasn't set in stone. We could explore the different ways we could do it together.

Q: How do you think the horseracing industry has changed since you used to bring your grandfather here?

Jeff:  You've got all these TVs now so you get the close-up version of the race. That's kind of neat. I was just talking to someone who is writing for a horseracing magazine. He asked, How can you get the younger generation involved? There's not really as much interest from the younger guys. It's true. I was talking to my publicist and we were saying, ‘Wouldn't it be great it they had something like a junior league race where younger teenagers could compete out here to bring some of those X-Games kind of guys in?' I think what would be interesting to the guys who are interested in skateboarding and that kind of thing is there is nothing more dangerous than horseracing. I think more people die in this sport than any other. It's really dangerous.

Q: Yeah, but you can't keep a horse under your bed, like you can a skateboard!

Q:  Were you glad you didn't have to be in the racing scenes?

Jeff:  No! That pissed me off. I did do some riding. They kind of cut that down a bit but we had three or four great days of Elizabeth Banks and myself riding over the hills at full tilt, just running. It was great.

Q: Are you or friends or yours interested in horseracing?

Jeff:  I'm not much of a gambler. I don't like to lose. I lost quite a bit of money in this movie betting on the horses here. I'm not a good better so I don't participate in that but it's wonderful to watch these animals together. The more you learn about it, the more you find fascinating in it. It's not just some guy being a passenger on a horse being carried around a track. It's all that physical endurance and strength that the jockeys have to have and the communication with the horse. All that psychological stuff you have to psych the other jockeys out with. What your game plan is and how you're going to change it on the spur of the moment when it doesn't go the way you thought. There's all kinds of things to be looking at. The history of the horses, all that stuff.

Q: Were you researching this stuff instead of betting on your off time?

Jeff:  A little bit but, as I said, I don't like to lose too much and I wasn't picking them very well. I'd say, 'Well, that guy's got a good name,' or 'that's an interesting name for a horse.' I'm kind of like that.

Q: At this point in your career, does it have to be a great script or is it more, ‘Hey, that might be fun to play'?

Jeff:  It seems to be the same way that I've picked since I've been in a position to pick, it's pretty much the movies that I'd like to see and those are usually movies that are unusual for some reason or don't fit into the norm. Like Stay Hungry. Hopefully all of them have something where the filmmakers are ahead of the audience. We're so used to seeing movies now where you're way ahead of the filmmakers. It's always great when the filmmaker surprises you a little. I love that.

Q: Seabiscuit is kind of a throwback. No big special effects.

Jeff:  That was one of the refreshing things about it for me was that it was a big budget movie but it wasn't all about special effects. The big special effect here was human emotion and for me, you can't beat that. That takes me higher than anything else. It's funny how fast, in this day and age, that you get jaded. Once you see Jurassic Park, ‘OK they can make dinosaurs'. How many of those are you gonna see? You they've got [he moves around in slo-mo]... I was doing my impression of bullet time. That MTV stuff. I get kind of tired of it.

Q:  This character and your character in Tucker are similar. Was there a conscious effort not to duplicate any of the Tucker character?

Jeff:  Yeah. Gary Ross and I talked about that a lot, not wanting to do 'Tucker 2' but there are a lot of similarities to the characters. Both period pieces. Both of the guys have a darker side and then this very flamboyant, gregarious side to them. There were similarities. When we started shooting there was nothing I would go out of my way to do Tucker or not do Tucker. I didn't think about it too much.

Q:  How much weight did you gain?

Jeff:  I don't really know. I'm sort of getting back there right now. I just did another movie, Door in the Floor, right after Seabiscuit and I kind of slimmed down for that. Now I'm starting to swell like Seabiscuit would!

Q:  What were your impressions of Chris Cooper and Tobey Maguire?

Jeff:  I admired their work, both of them, a lot before. I was anxious to work with them. They didn't disappoint me. Working with them was a lot of fun.

Another thing that attracted me to this film was Gary Ross did a great job of condensing this massive book and one of the ways he did it was this device of having a lot of very short scenes which was kind of challenging for an actor because you kind of build your character on the dialogue you have in scenes but you'd just have a scene where you say ‘don't worry about it'. And that's the scene. Most movies you have 200 some odd scenes. This movie had 400 scenes in it. It wasn't any longer than a normal movie but it had all those scenes. It was great to have a scene with Chris Cooper sitting around the fire. That wouldn't be a long scene in most movies but that was one of the longer scenes here. So we got a scene like that where you could say a few things to each other and that was a lot of fun.

Q:  Yes, like when you and the Marcela meet and are suddenly married.

Q: Was it a leap of faith as an actor to work with a shorthand like that?

Jeff:  Yeah. It was an ambitious thing to attempt. I'd never done anything quite like that before and thought it was an interesting solution to that problem. How do you condense it and have the audience care about these four different stories going on simultaneously?

Q: You have your ranch in Montana. Do you have horses there?

Jeff:  Yeah. I've got a couple of horses. I love to ride up there.

Q: So you would really liked to have done more riding in this?

Jeff:  Actually, I got to ride. Elizabeth was really a sport. We were racing. We were doing full out. It was great fun. I think she actually won. I tried to catch her but I could not catch her. It's funny, when a horse hears another horse behind it, it does not wanna slow down. The faster I'd go, the faster she'd go.

Back to main article page