The feature race on Saturday at Santa Anita was the $200,000 San Pasqual Stakes (G2), a 1 1/8 mile main track contest for older horses prepping for the Santa Anita Handicap (G1) run on March 7. Conditions were excellent for early February, with sunny skies and temperatures in the mid 80's, with 6,521 fans in attendance. Malibu (G1) runner-up Roadster was sent off as the 9-5 favorite in the field of 9. In to challenge him included 2-1 second choice Midcourt, 3rd in the San Antonio (G2), and 7-2 third choice King Abner, 2nd in the San Antonio.

Jockey Victor Espinoza sent Midcourt to a clear lead first time by through fractions of 23.50, 47.31, and 1:11.26 while pressed by 7-1 Restrainedvengeance and stalked by King Abner. Turning for home, Midcourt continued to lead through 1 mile in 1:36.22. 22-1 Two Thirty Five, 4th early, attempted to close to no avail as Midcourt drew off late to win by 3 1/2 lengths in 1:48.49. It was another 2 1/4 lengths back to late-running 18-1 Combatant third, while favorite Roadster trailed early and failed to close, finishing 7th beaten 9 1/2 lengths. 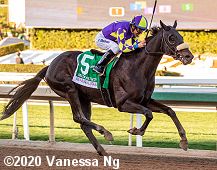 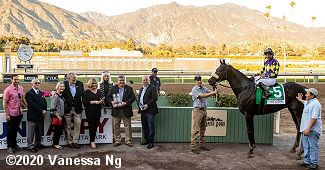 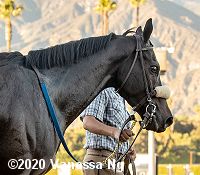 Left: Midcourt in the winner's circle. Winning owner Lee Searing said, "I've only started one horse in my life in the Santa Anita Handicap and the horse was a long shot. Whether the one time we ran in the Kentucky Derby or the times we ran in the Breeders' Cup, Santa Anita Handicap would be really fun. I've been doing this a long time. It's fun to buy these horses and see, you know some of them don't come along, but this one looks like we are moving right along."

Right: Midcourt heads back to the barn. Winning trainer John Shirreffs said, "Victor wasn't sure if he was going to go to the lead or sit off the pace, but the horse put himself in the race and if he wanted to run that way, he didn't want to take him out of it. Yes, it is gratifying to see him make the lead, relax and finish like he did. He's been a project, but a good project. We'll stay home and run in the Santa Anita Handicap." 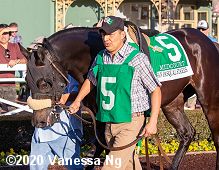 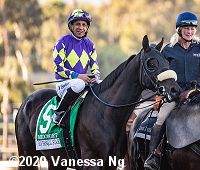 Left: Midcourt in the paddock before the race. Winning jockey Victor Espinoza said, "With him you never know how he is gonna perform coming out of the gate. He could go either way. Today he wanted to run,he broke not very quick, but when I encouraged him to go he wanted to do his own thing. I wasn't going to take him out of his race so I just let him run and cruise around."

Right: Midcourt in the post parade. Espinoza added, "When I took the lead and was able to open up one or two lengths that was the key for him. We were in a good spot and in great shape all the way around, to be able to control the race that was enough for him. I started celebrating but I didn't want to be too excited so early because its horse racing anything can happen but we got the job done. He's a really talented horse in his own way. I have confidence in him because John Shirreffs has done an amazing job with him and it makes my job much easier to know that John is going to have him ready to go into the race." 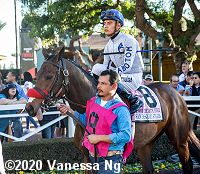 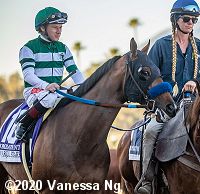 Left: Second place finisher Two Thirty Five in the paddock before the race. He improved his record to 5 wins, 4 seconds, and 5 thirds in 21 starts, earning $268,165 for owner-trainer Richard Baltas and co-owners Tom Mandor, Tammi Nielsen, and Kim Rasmussen. 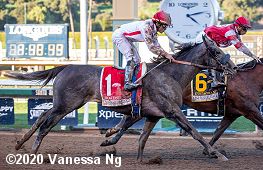 Right: The horses break from the gate for the San Pasqual Stakes. 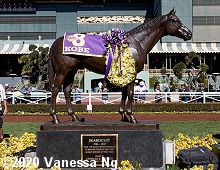 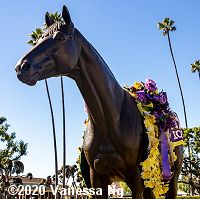 Santa Anita honored the late Kobe Bryant of the LA Lakers by dressing the Seabiscuit statue in the paddock with a special saddlecloth and wreath. Bryant passed away tragically in a helicopter crash on January 26 along with his daughter Gianna and six other passengers and the pilot. The saddlecloth is embroidered with both of Bryant's retired numbers, 8 seen here, and 24 is on the other side. 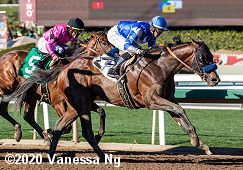 An hour before the San Pasqual, a field of 6 three-year-olds went to post for the $100,000 Robert B. Lewis Stakes (G3), a 1 1/16 mile points-scoring race in the Road to the Kentucky Derby series, the points system used to determine Derby starting spots. Los Alamitos Futurity (G1) winner Thousand Words was sent off as the 3-5 favorite over 5-2 second choice High Velocity, 3rd in the Los Alamitos Futurity, and 11-2 third choice Tizamagician, off his maiden win in his 6th try.

Jockey Joel Rosario sent High Velocity to the lead first time by through fractions of 23.65, 47.20, and 1:11.44 while pressed by Tizamagician and stalked by 18-1 Royal Act. Entering the stretch High Velocity continued to lead through 1 mile in 1:37.14 but Thousand Words, 4th early under Flavien Prat, came out for room to take over the lead inside the 1/16 pole, holding off Royal Act late to win by 3/4 length in 1:43.64. It was a neck back to High Velocity third. 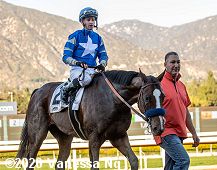 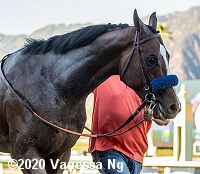 Left: Thousand Words heads to the winner's circle. Winning trainer Bob Baffert said, "(Flavien) Prat says he is getting better, he was a sort of immature colt. He grinds and you gotta really work at him. Being stuck down inside he got the worst of it. Usually a young horse like that they don't run that well and they don't respond. He's got that big long stride and the further the better with him. You could tell about the last 50 yards he was really getting going. He came back he wasn't even tired so that is a good sign. He is progressing with every race and to win three in a row like that it is pretty impressive.

Right: Thousand Words heads back to the barn after the race. 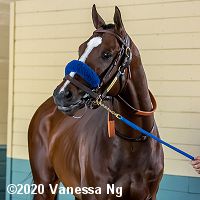 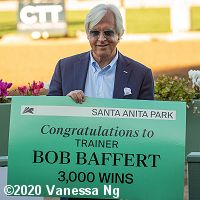 Left: Thousand Words in the paddock before the race.

Right: The win marked Bob Baffert's 3000th as a trainer. Baffert said, "I've always thought things happen for a reason. Running in the Bob Lewis, with a horse named Thousand Words and going for 3,000 wins. I mean you can't make that up. I had a feeling it was gonna happen in this race, I've had a lot of good people work for me through the years, the first 50 wins were probably the hardest, 100 were life changers. I feel very blessed and fortunate that I've been able to last this in this business and do so well in this business after coming from the quarter horse business. I've never dreamt of coming into thoroughbreds, there was never one instant I was thinking about it. I came over with Mike Pegram and Hal Earnhardt who I still have after all these years, they are a big part of the team." 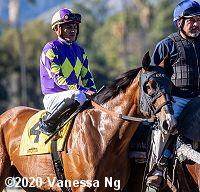 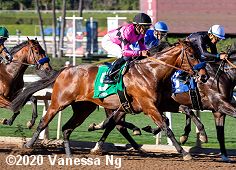 Left: Second place finisher Royal Act in the post parade. Jockey Abel Cedillo said, "He tried really hard and I put him in the position I wanted him to go. I was sitting perfect and when I made him move he started moving. He ran a big race." Trainer Peter Eurton added, "Couldn't be more happy. He's just kind of a grinder, he's just that cool kind of horse that keeps giving it to you."

Right: Third place finisher High Velocity at the front first time by. Trainer Bob Baffert said, "I told (Joel) Rosario don't fight High Velocity if he wants to run, I really thought down the backside High Velocity was gonna steal it, he has a lot of speed and he hung in there well. We are just happy for them and the connections. The horses showed up and ran well."

The horses break from the gate for the Robert B. Lewis Stakes. 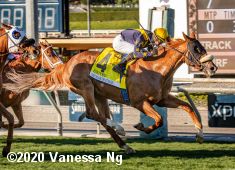 Jockey Hector Berrios sent 16-1 longest shot Brown Storm to the lead exiting the chute through fractions of 23.31, 46.92, 1:10.99, and 1:35.06 while pressed by 11-1 Chosen Vessel and stalked by 12-1 Multiplier. Entering the stretch Brown Storm continued to lead through 9f in 1:47.12 before tiring. United, 4th early under Flavien Prat, came out 4 wide for room, came through between horses to win by 1/2 a length over late-running Cleopatra's Strike in 1:59.04. It was a neck back to Oscar Dominguez third. 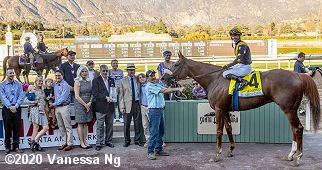 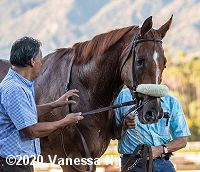 Left: United in the winner's circle. Winning trainer Richard Mandella said, "You could see there wasn't a lot of pace in the race. He's got a big lumbering stride and you don't want to get in the way of it. We just let him cruise along and that worked out well." Owner Alex Solis II added, "It's probably more how he wants to be ridden during the race. A mile and a quarter is not really his thing. He's probably better at a mile and a half. He's just one pace, he stays. It's great, it's perfect prep for Dubai and we'll go from here. He doesn't quicken, if you look at his fractions he can finish in twenty three and four, twenty three and three, that's as fast as it's going to get."

Right: United heads back to the barn after the race. Winning jockey Flavien Prat said, "I think I made a mistake last time (Hollywood Turf Cup). I was trying to keep him covered up and it didn't end up the way I wanted and I found myself too far back. Today we broke off and we were in the race (early). He just (kept running) to the wire." 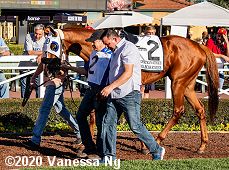 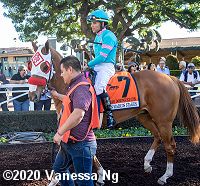 Left: Second place finisher Cleopatra's Strike in the paddock before the race. The Phil D'Amato trainee improved his record to 4 wins, 11 seconds, and 2 thirds in 28 starts, earning $468,844 for owners Slam Dunk Racing and Michael Nentwig.