The feature race at Santa Anita on Saturday was the $200,000 San Gabriel Stakes (G2) for older horses going 1 1/8 miles on the turf. Conditions were excellent, with sunny skies and temperatures in the low 70's. John Henry Turf Classic (G2) winner Cleopatra's Strike was sent off as the 6-5 favorite in the field of 7 off his 4th place finish in the Hollywood Turf Cup (G2). In to challenge him included 4-1 second choice Overdue, 9th in the Hollywood Turf Cup, and 5-1 third choice Majestic Eagle, 4th in the Seabiscuit Handicap (G2).

Jockey Mike Smith sent Overdue to the lead first time by through fractions of 24.26, 48.18, and 1:11.65 while pressed by Majestic Eagle and stalked by 11-1 Acker. Entering the stretch Overdue tired as Majestic Eagle inherited the lead through 1 mile in 1:35.98. 7-1 Desert Stone, last early under Geovanni Franco, came out for room and outfinished favorite Cleopatra's Strike to win by a neck in 1:47.63 over firm going. It was another 1 1/2 lengths back to Majestic Eagle third. 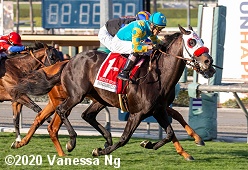 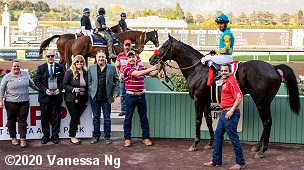 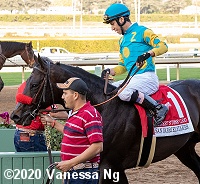 Left: Desert Stone in the winner's circle. Winning trainer Richard Baltas said, "He's healthy now. When we stopped on him, we gave him 90 days on the farm and it did him a lot of good, he looked a lot healthier, obviously it paid off."

Right: Desert Stone enters the winner's circle. Winning jockey Geovanni Franco said, "I could see everybody bunching up and I knew the pace was pretty slow, but my horse was just waiting for me to turn him loose, so I didn't worry about it. He's always a handful. But he's just doing really good. We expected him to run good today and I was very happy with the way he ran from off the pace. I've worked him a lot and he likes me and I like him." 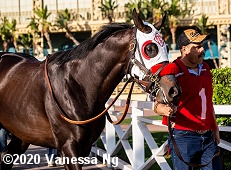 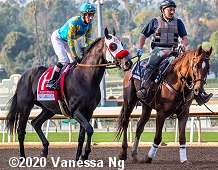 Left: Desert Stone in the paddock before the race. Baltas added, "Turf is weird, sometimes it holds the speed sometimes it doesn't. The turf course changes daily so that is just the way he runs. You can't change the horse's style, he runs from behind and Geovanni Franco is the only guy that knows how to ride him. If you look at his form this horse just likes this jockey. (Geovanni) does a good job, this is kind of a different horse. You can't force this horse. He has a mind of his own, when he wants to run he'll run and Geovanni lets him do his thing in the beginning. He told me today, 'If I can get him out we're gonna be tough.' He had been blocked several times in the stretch before." 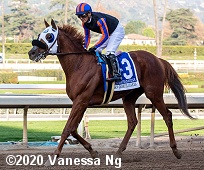 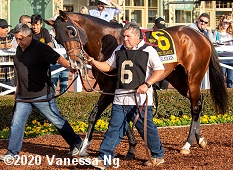 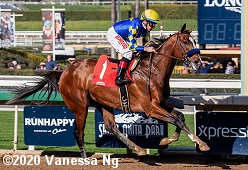 Earlier in the afternoon, a field of 6 three-year-olds contested the $100,000 Sham Stakes (G3) over 1 mile on the main track, worth 10 points to the winner under the Road to the Kentucky Derby. Authentic was sent off as the 6-5 favorite off his debut win at Del Mar. In to challenge him included 2-1 Azul Coast, a debut winner last out at Los Alamitos, and 11-4 Taishan, a maiden winner at second asking at Santa Anita in November.

Jockey Drayden Van Dyke sent Authentic to a clear lead first time by through fractions of 23.87, 44.94, and 1:12.18 while pressed by 15-1 Uncaptured Hero and stalked by 34-1 longest shot Zimba Warrior. Entering the stretch Authentic opened up 8 lengths on the field through 7f in 1:24.30. Azul Coast put in a strong late rally from last to no avail and Authentic cruised past the post 7 3/4 lengths clear in 1:37.57. It was another 1 1/2 lengths back to Zimba Warrior third. 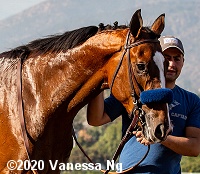 Left: Authentic in the winner's circle. Winning trainer Bob Baffert said, "We thought if he's a good horse, he should win. That's what you're hoping for, the way he was working and all. Drayden (Van Dyke) has always been really high on him. I joked with him when he came back. I said, 'Do you think he's a little bit too much horse for you? No, no, no he's not!' You want to see him run like that, especially this time of year. We've got some other ones back there, hopefully they'll come along, but the timing is good for him now to run in the (San Felipe Stakes). He saw the crowd (when he lugged in midstretch). We had a decent crowd today. He saw something, but he's never really acted that way before. He was just out there by himself and didn't know what was going on, he wanted to throw the brakes on."

Right: Authentic heads back to the barn after the race. Winning jockey Drayden Van Dyke said, "The main thing was getting out of the gate; once we did it was a nice trip. I took the lead and I wasn't going to go too fast but I'm happy I got the trip I did." 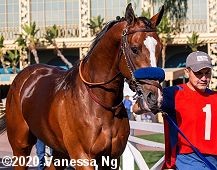 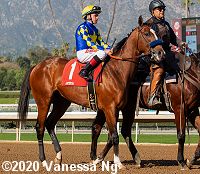 Left: Authentic in the paddock. Van Dyke added, "I told Bob when he broke his maiden (Nov. 9) he was my favorite two-year-old. He's very talented. I think the noise from the crowd made him react the way he did there in the stretch. His ears went toward the crowd, so I think that's what caused it, but then when he got down to the rail, he spooked himself again."

Right: Authentic in the post parade. Baffert added, "I thought he was the quickest horse in the race. He won going 5 1/2 in 1:03 and change. He moves like a gazelle. He's real light, he's leggy. It was a big move forward. The second race is the toughest one to make. When I ran him the first time at Del Mar he was a little bit green that day, because I was debating whether or not to put blinkers on him. I didn't, but he may need something to keep him more focused. Today he wasn't blowing hard after the race and didn't take a deep breath so that is a good sign." 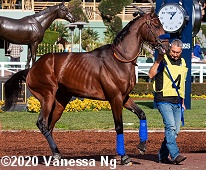 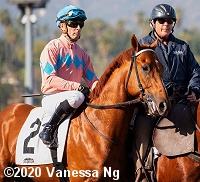 Left: Second place finisher Azul Coast in the paddock. Trainer Bob Baffert said, "Azul Coast ran a decent race. He's better than that. He got a little sick on me after Los Alamitos. He lost some time, lost some weight, but he ran second because he's a class horse. He'll move up after that." Jockey Joel Rosario added, "He got a lot of dirt in his face early and then he came running. He'll move forward off of this."