In November the New York racing circuit moves to Aqueduct in Ozone Park, Queens, for the winter season. The feature race on Saturday was the $200,000 Red Smith Handicap (G3), a 1 3/8 mile turf contest for older horses. Conditions were typical, with partly cloudy skies and temperatures near 50. Man O'War (G1) winner Wake Forest was sent off as the 3-4 favorite in the field of 11 off his third place finish in the Canadian International (G1) after finishing a close second in the Northern Dancer (G1) both at Woodbine. In to challenge him included 11-2 second choice Danish Dynaformer, winless since the Singspiel (G3) in July and 6th in the Canadian International last out, and 6-1 third choice Messi, winner of the Sky Classic (G2) but last of 10 in the John Henry Turf Classic (G2) at Santa Anita. 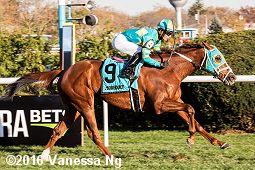 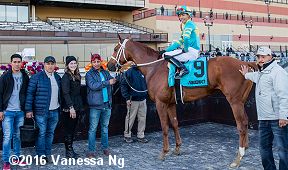 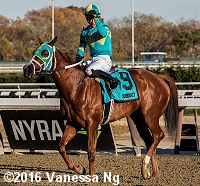 Left: Bigger Picture in the winner's circle. Winning jockey Jose Ortiz said, "I felt if I made a move I could get in a good position on the turn before (Rum Tum Tugger). I just felt like doing it and it worked out perfectly. They went slow but I could've stayed back because my horse was very relaxed. I made him go a little bit and got great position on the turn." 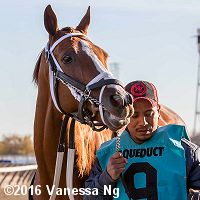 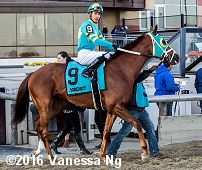 Left: Bigger Picture walks over from the barn before the race.

Right: Bigger Picture heads out for the post parade. Ortiz added, "I knew Johnny (Velasquez aboard Danish Dynaformer) was coming from the outside but we entered the stretch and I let him go and he responded. He's a very game horse, when he felt (Danish Dynaformer) coming towards him he flicked his ears and tried to kick on." 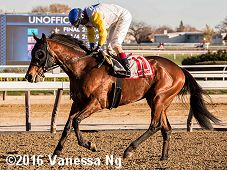 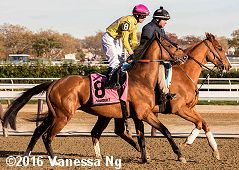 Left: Second place finisher Danish Dynaformer returns after the race. The 11-2 second choice was unhurried early under John Velazquez then rallied 7 wide but could not pass the winner. The Roger Attfield trainee improved his record to 5 wins, 2 seconds, and 1 third in 18 starts, earning $724,634 for owner-breeder Charles Fipke. 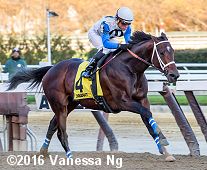 Immediately after the Red Smith, a field of 9 three-year-olds contested the $150,000 Discovery Stakes (G3), a 1 1/8 mile trip over the main track. Gift Box was sent off as the 7-4 favorite, unraced since finishing 4th beaten 18 lengths in the Travers (G1) at Saratoga. In to challenge him included 9-2 second choice Adulator, making his stakes debut off 2 straight seconds in allowance company, and 5-1 third choice Governor Malibu, second in the Jim Dandy (G2) back in July and 2nd in the Empire Classic last out.

Jockey Joel Rosario sent 6-1 fourth choice Stickstatelydude to the lead first time by and he set fractions of 24.29, 49.21, and 1:13.87 over the fast track while pressed by 23-1 Neolithic and stalked by Adulator. Entering the stretch, Stickstatelydude continued to lead through 1 mile in 1:38.13, and easily pulled away to win by 1 1/4 lengths over Neolithic in 1:50.58. It was a long 2 1/4 lengths back to late-running 13-2 My Man Sam third, while favorite Gift Box checked in 5th. 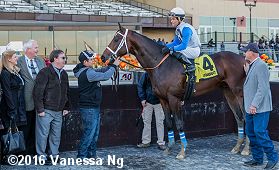 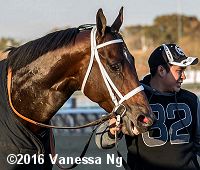 Left: Sticksstatelydude in the winner's circle. Winning trainer Kiaran McLaughlin said, "There wasn't much pace after (Hot Seat) scratched, so we told Joel, 'if they let you go to the lead, do your thing' and he said he'd be first or second. So when he broke well and went on with him, it was a great effort. The fractions weren't too fast and everything went well, and this was a nice group of horses. We're proud of him. Where we go from here, we don't know yet. He'll stay here in New York for a while but we'll wait and see."

Right: Sticksstatelydude heads back to the barn after the race. Winning jockey Joel Rosario said, "We thought he was going to be 1-2 and I got out of there and he was in the lead. He was going pretty easy and I just let him do his thing. It's exactly how he likes to go. We stayed up front and it looked like easy fractions and it left him with something in the end." 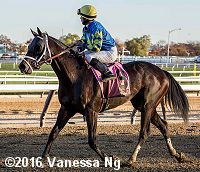 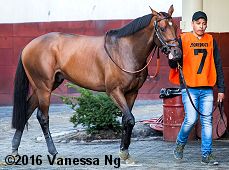 Left: Second place finisher Neolithic returns after the race. The 23-1 shot pressed the pace in second under Jose Lezcano but could not improve finishing second beaten 1 1/4 lengths. The Todd Pletcher trainee improved his record to 1 win, 3 seconds, and 0 thirds in 6 starts, earning $86,828 for owner Starlight Racing. 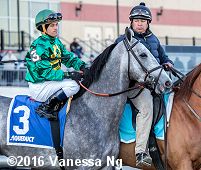 Left: Fifth place finisher and beaten favorite Gift Box heads out for the post parade. The 7-4 favorite sat 5th early under Javier Castellano, moved up to challenge on the turn but came up flat late to check in fifth beaten 4 1/4 lengths. The Chad Brown trainee has a record of 2 wins, 1 second, and 2 thirds in 7 starts, earning $245,000 for owner William S. Farish.

Right: The horses break from the gate for the Discovery Stakes.