The $200,000 Ontario Derby (G3) at Woodbine usually does not have much bearing on year-end voting for Canada's champion 3-year-old or Horse of the Year. However, despite its Grade 3 status, the 2006 edition brought together some of the top horses of the division. A field of six went to the gate in this 1 1/8 mile feature over the Polytrack, with Shillelagh Slew sent off as the lukewarm 2-1 favorite off his win the Canadian Derby at Northlands Park last time out. He was third in the Breeders' Stakes in August and won the Prince of Wales Stakes by disqualification in July. In to challenge him were 5-2 second choice Oh So Awesome, shipping in from Belmont Park after two 5th place finishes in graded stakes company, in the Belmont Stakes and in the Jim Dandy, and 2.85-1 third choice Royal Challenger, winner of his last two starts including the Breeders' Stakes. However, the race lost some of its luster when expected favorite Seaside Retreat scratched.

As expected, 3-1 fourth choice Stradivinsky sprinted to a clear lead, and he pulled away to as many as ten lengths clear of stalker Shillelagh Slew through fractions of 24.48, 48.17, and 1:13.34. Jockey Dino Luciani aboard the favorite sat chilly the whole way, as it was another 2 lengths back to the rest of the field. Entering the stretch, Stradivinsky tired badly to eventually finish last. Shillelagh Slew went outside of the tiring pacesetter and was all alone in mid-stretch, clear by 5 lengths over 15-1 Storm Caller. In the final furlong, Shillelagh Slew drew away to a 7 1/4 length win over late-running Royal Challenger, in a time of 1:51.65. It was just a neck back to Storm Caller in third. Oh So Awesome failed to fire, finishing fifth. 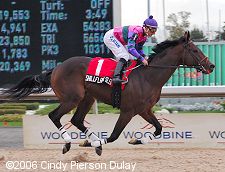 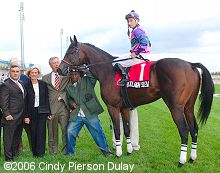 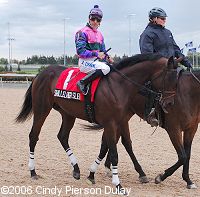 Shillelagh Slew in the post parade before the race. Winning jockey Dino Luciani said, "He's just come into himself. He's done everything we asked and he proved it once again today how good he really is." 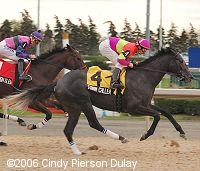 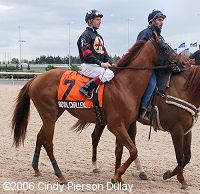 Left: Third place finisher Storm Caller leads the main pack behind the pacesetter as they pass by the stands for the first time.

Right: Second place finisher Royal Challenger in the post parade before the race.