Kentucky Oaks Day on Friday usually draws the second largest attendance of any raceday in North America, second only to the Kentucky Derby run the very next day. Four graded stakes races and 1 ungraded were contested over the fast main track and firm turf course on the Oaks undercard. It was mostly cloudy through the day with temperatures in the low 60's. A crowd of 113,071 was on hand, the third largest ever for Kentucky Oaks day. 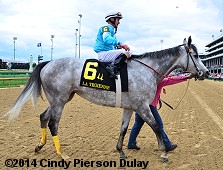 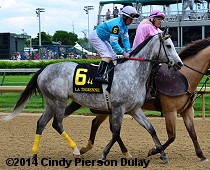 Left: On Fire Baby circles before going to the winner's circle. Winning trainer Gary Hartlage said, "I thought (Devil's Cave) would be on the lead and we would be stalking her. Joe had to get into her to keep up. Joe did a super job riding her. He asked her and she went on. I've always thought she was one of the top 5 fillies and mares in the country and hopefully she showed that today."

Right: On Fire Baby in the post parade. Winning jockey Joe Johnson said, "We wanted to be in a stalking position. Her last race was a good one. She was second to Close Hatches and we had given her a run for the money that day. She showed today that she is among the best. She is so gutsy." 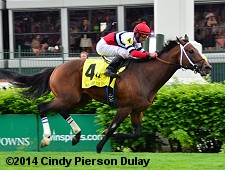 The $150,000 Twin Spires Turf Sprint (G3) featured a field of 9 older horses sprinting 5 furlongs on the Matt Winn Turf Course. Sum of the Parts, fourth in the Colonel Power last out, was sent off as the 3-1 favorite over 7-2 second choice Marchman, winner of the Shakertown (G3), and 9-2 third choice Positive Side, second in the Shakertown and the Colonel Power. Sum of the Parts was quickest away through an opening quarter in 22.08 while stalked by Marchman. At the top of the lane, Sum of the Parts tired allowing Marchman to inherit the lead through a half in 44.23. 6-1 Undrafted rallied from 8th but Marchman cruised under the line 1 1/2 lengths in front in 56.04 over the firm course. It was just a neck back to Positive Side third. Favorite Sum of the Parts finished sixth.
Results chart from DRF 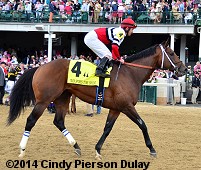 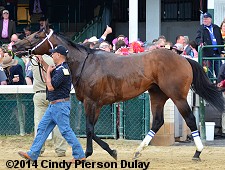 Left: Marchman in the post parade. Winning trainer Bret Calhoun said, "He broke sharp; I think that was the key.He's in very good form. He's getting better and better. He can on dirt, but right now we'll keep him sprinting on turf."

Right: Marchman heads back to the barn. Winning jockey Robby Albarado said, "Obviously when there is only one horse in front you it is not hard to get an outside position. I felt very confident in him. I squeezed on him, and he went on by commandingly." 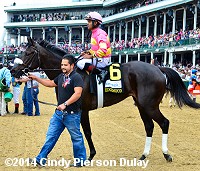 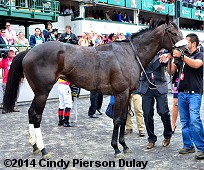 Left: A Little Bit Sassy heads to the winner's circle. Winning owner Ramona Bass said, "She's just a lovely filly. We've been excited about her from the beginning. I fell in love with her at Keeneland (2012 September Sale). I had to have her. Thankfully, she's really run well. I think we're going to have a lot of fun with her."

Right: A Little Bit Sassy after being unsaddled. Winning jockey Luis Saez said, "The last two times she tried to run on the front because she is very fast. But today, (trainer Michael Matz) told me to break and take her back and she did great. I got her to relax and when I got in the stretch she responded to me very well."

The $175,000 Eight Belles Stakes (G3) featured a field of 9 three-year-old fillies sprinting 7 furlongs on the main track. Fair Grounds Oaks runner-up Fiftyshadesofgold was sent off as the 2-1 favorite over 5-2 She's a Tiger, winner of the Breeders' Cup Juvenile Fillies (G1), and 9-2 Jojo Warrior, second in the Instant Racing Stakes. Jojo Warrior battled for the early lead with 24-1 Cash Control and Fiftyshadesofgold through fractions of 22.31 and 44.77. At the top of the lane, Fiftyshadesofgold moved up to gain the lead through 3/4 in 1:09.27. 9-1 Milam came on from 6th to challenge but Fiftyshadesofgold held her off by 1/2 a length in 1:22.50. It was another 3 1/2 lengths back to Cash Control third. 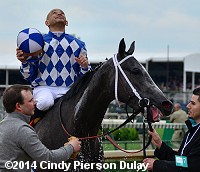 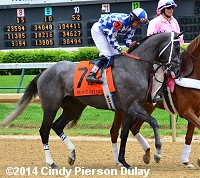 Left: Fiftyshadesofgold returns afte the race. Winning trainer Bret Calhoun said, "It was the right call at the end of the day. You don't have a lot of opportunities to run in the Oaks but at the end of the day we wanted to win a graded stakes with this filly and we think this gave us the best chance."

Right: Fiftyshadesofgold in the post parade. Winning jockey Mike Smith said, "I knew when I locked into (Milam) at the 1/16 pole, that I had her measured. We could have gone around again and she wan't going to beat us." 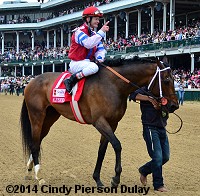 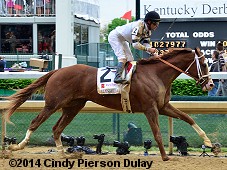 Left: Moonshine Mullin in the winner's circle. Winning jockey Calvin Borel said, "I just sat as long as I could. I looked over my shoulder and I didn't see nothing else running. This is a nice horse. This horse is getting so good it's unbelievable." Winning trainer Randy Morse said, "His last race was just huge. It wasn't against this caliber of horses, but he really stepped it up. He's been doing well, and then we drew the 1 hole, which was a huge plus. He's been a good horse in the past - he ran second in the Jim Dandy as a 3-year-old. He's had some class before and he's finding it back now. I'm very happy."

Right: Beaten favorite and 6th place finisher Will Take Charge crosses the finish line. Jockey Gary Stevens said, "We got into the first turn okay, but I wasn't happy down inside and he wasn't happy down inside. I got an opportunity to get him out in the clear at the 5/8 pole, but immediately Rosie came up on the outside of him, putting pressure on him, and he wasn't liking it. He just never got into that big, beautiful rhythm we're used to seeing."