The $1,000,000 Longines Kentucky Oaks (G1) is the premier race in the country for 3-year-old fillies, and is the female counterpart to the Kentucky Derby. After the late scratch of Empress of Midway after she flipped in the starting gate, a field of 12 faced the starter in the 140th renewal of this 1 1/8 mile main track feature at Churchill Downs, run on Friday before 113,071 fans, the second highest Oaks attendance in history. Conditions were excellent, with overcast skies, minimal wind, and a post time temperature of 60 degrees. As expected, Untapable was sent off as the even-money favorite off her wins in New Orleans in the Rachel Alexandra (G3) and the Fair Grounds Oaks (G2). In to challenge her included 5-1 second choice My Miss Sophia, winner of the Gazelle (G2) at Aqueduct, and 8-1 third choice Rosalind, off her win in the Ashland (G1) at Keeneland.

Jockey Calvin Borel sent 13-1 Sugar Shock to the lead first time by and she set fractions of 23.67 and 47.80 while stalked by My Miss Sophia and 17-1 My Miss Marylou, with Untapable sitting 4 wide just behind the first three. On the far turn, Sugar Shock tired as My Miss Sophia gained the lead through 3/4 in 1:12.24, but this was short-lived as Untapable easily took over at the 3/16 marker, getting the mile in 1:36.16. Kept to task by regular rider Rosie Napravnik, Untapable left My Miss Sophia in her wake, finishing up 4 1/2 lengths in front in 1:48.68 over the fast main track. It was a long 6 lengths back to 14-1 Unbridled Forever third. The winning time was just 4/100 seconds off the stakes record set by Bird Town in 2003. 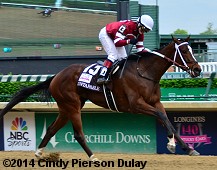 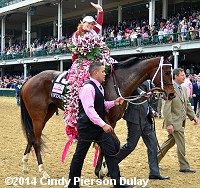 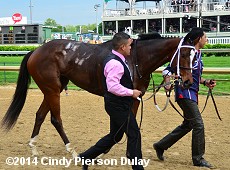 Left: Untapable heads to the winner's circle. Owner Ron Winchell said, "It feels great," said winning owner Ron Winchell. "We were here with Summerly in 2005. It's very important to us; owning the sire (Tapit) and the mare (Fun House) being a part of the family for so long." Farm manager Dave Fiske added, "We sent Fun House to be bred back to Tapit this morning at 9. Perhaps that was an omen."

Right: Untapable heads back to the barn. Trainer Steve Asmussen said, "On this stage under circumstances...the filly in the gates, the paddock, how congested it is. The anxiety level once they backed them out and reloaded them took it to a whole new level but once she was away smoothly it was all good from there." Asked if Untapable would go in the Preakness like Rachel Alexandra, Asmussen said it would depend on Tapiture, who is entered in the Derby for Ron Winchell. 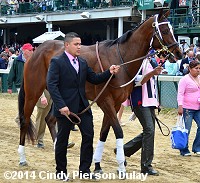 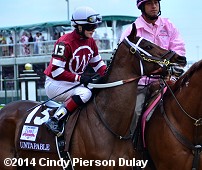 Left: Untapable heads into the paddock before the race.

Right: Untapable in the post parade. Winning jockey Rosie Napravnik, celebrating her second Kentucky Oaks win, said, "She was magnificent! She came out of the paddock a little hot but she really calmed down when she got on the track and there was a lot more space and less people. We broke sharp and had the perfect conditions. She was really great. I wasn't worried about (the outside) post position like so many other people were. She ran her race. She's learned to relax. She's matured. She's growing up. This will go down as one of my greatest moments. I have so many women out there pulling for me, it's really inspiring to me. It really makes me feel great. I am so thankful for Steve and for the Winchells having me on the filly. They have done such a great job. They take their time with this filly and she is just maturing. She is moving forward all the time and she was perfect today." 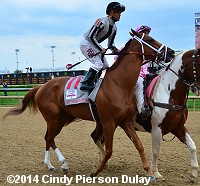 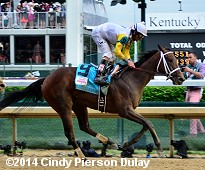 Left: Second place finisher My Miss Sophia in the post parade. Trainer Todd Pletcher said, "I thought My Miss Sophia ran very well. She was well clear of the third-place horse. I'm very proud of her effort in just her fourth career start."

Right: Third place finisher Unbridled Forever after the finish. Trainer Dallas Stewart said, "We got outrun. She ran a great race. I'm very proud of my horse. Proud of Chuck Fipke. He bred her. What can I say? We'll be back here next year with another one of his, hopefully." 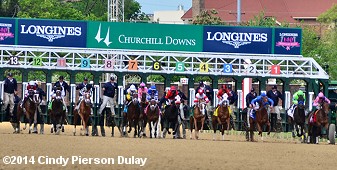 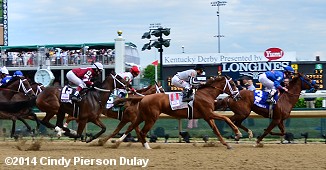 Left: The fillies break from the gate for the 140th Kentucky Oaks. Doug O'Neill, trainer of Empress of Midway who flipped in the gate and was scratched by the veterinarian, said, "(Empress of Midway) was in the gate and they were having a little trouble loading (Untapable) They were smooching at her and it riled my filly up some. She false broke. Then she went down. Thank goodness she was smart enough to stay down and not move; she didn't go to thrashing. They got her out of there and we've got her back at the barn. She's fine. We'll fight another day."

Right: First time by with Untapable in fourth on the outside. Trainer Steve Asmussen added, "The development of the filly, I think Rosie has been a key part of it. After the bad race in the Breeders' Cup I think the filly got back on track, ran a little bit better in the Starlet, but onCe we moved her to New Orleans, I thought the filly grew up a lot, filled out considerably. Riding Rosie over the last few winters on several horses, having some success with her, liking her demeanor and her way with her, especially with one as talented as Untapable, but also a touch on the moody side. I think it's a perfect match."