Kentucky Derby Day is the biggest card of racing at Churchill Downs. Before the main event, there were five graded stakes contested over the main track and turf course before the crowd of 164,906, the second largest in history. Conditions were ideal with a dry fast main track, firm turf, sunny skies, and temperatures in the low 70's with some wind. 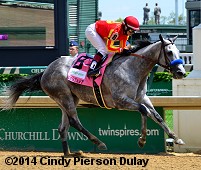 The first Grade 1 event on the card is the $300,000 Humana Distaff Stakes (G1), featuring older fillies and mares sprinting 7 furlongs on the main track. Las Flores (G3) and Madison (G1) winner Judy the Beauty was sent off as the 6-5 favorite in the field of 6 over 8-5 Midnight Lucky, unraced since winning the Acorn (G1) last May, and 6-1 Scherzinger, winner of the Santa Monica (G2). Jockey Rosie Napravnik sent Midnight Lucky to the lead exiting the chute and she set fractions of 22.74 and 45.04 while pressed by Judy the Beauty. Entering the lane, Judy the Beauty tired as Midnight Lucky opened up a 4 length lead through 3/4 in 1:09.01, and cruised past the post 4 1/2 lengths in front of late-running 21-1 Street Girl in 1:22.23. It was another 1/2 length back to Scherzinger third, while Judy the Beauty was fourth.
Results chart from DRF 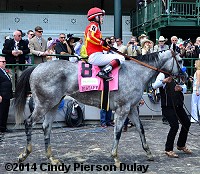 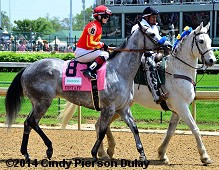 Left: Midnight Lucky in the winner's circle. Winning trainer Bob Baffert said, "We needed to win a race. The Hoppertunity group, you could have poured us out of a shot glass the last couple of days. We can do that off the layoff, I’ve been doing it all my life, from my Quarter Horse days. She’s brilliant. When she got away on an easy pace the first quarter I knew she had them over a barrel. When she’s on, she’s really on."

Right: Midnight Lucky in the post parade. Winning jockey Rosie Napravnik said, "She broke wonderfully. Coming from the outside (post 8), I was able to take my time getting into position. I was always comfortable. Coming off a year's layoff, she's just as good as she was." 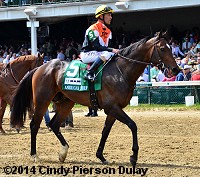 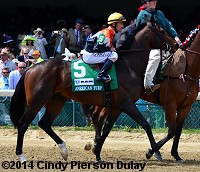 Left: Global View returns to the winner's circle. Winning trainer Tom Proctor said, "His last race was on Polytrack. I'm like everybody else – I've got hope. He got a perfect trip. It's really good when there's not a horse within a length or two of you the first half mile of a race. That's means a lot. (What's next?) "I'll just give him a bath and worry about that later."

Right: Global View in the post parade. Winning jockey Gary Stevens said, "Tom just said, 'Enjoy yourself, have a good time. I want you to concentrate on just the finish. I don't care where you're at early. Just make sure you've got horse to finish up with.' It took me a while through the stretch the first time to wrangle him back, get him to settle. And once he did, it was just a matter of getting him out at the head of the stretch and letting him do his thing. He's got a powerful, powerful kick. I think he's going to be a top, top turf horse, I'm talking Grade 1. He's still learning. He's a big colt. He's still developing right now. He's only going to get better." 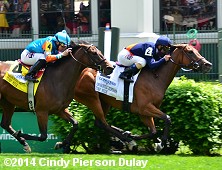 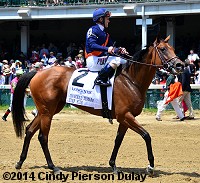 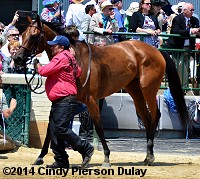 Left: Coffee Clique returning to the winner's circle. Jockey Javier Castellano said, "I saw the way two or three horses have the speed in the race. I wanted to just stay off the pace a little bit. My horse is very brave. Turning for home, she split horses and kept on the rail. I saved all the ground. The most important thing on the grass is to save some ground and I think it paid off today."

Right: Coffee Clique heads back to the barn. Trainer Bryan Lynch said, "I thought she settled lovely. It was a good decision on the first turn to take back a bit. He (Jockey Javier Castellano) said she was game down on the inside the last part of it and he didn't really have to get after her. He could feel she was getting into a rhythm. We'll be taking her up to Canada this summer for the grass program up there. This spring she has really come to herself." 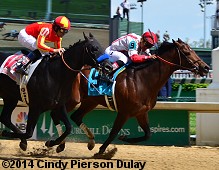 The $400,000 Churchill Downs Stakes (G2) features older horses sprinting 7 furlongs on the main track. San Carlos (G2) winner and Carter Handicap (G1) runner-up Sahara Sky was sent off as the 5-2 favorite in the field of 11 over 3-1 defending champion Delaunay, second in the Duncan F. Kenner, and 9-2 Shakin It Up, winner of the Strub (G2). Delaunay and 15-1 Falling Sky dueled for the lead down the backstretch through fractions of 22.29 and 44.69. On the turn, 11-1 Central Banker, sixth early, came out 4 wide for room and swept to the lead through 3/4 in 1:08.71. Shakin It Up, 7th early, put in a strong late rally but Central Banker held him off by a head in 1:21.15 over the fast track. It was another 1 3/4 lengths back to 5-1 Clearly Nnow third, while Sahara Sky checked in 7th.
Results chart from DRF 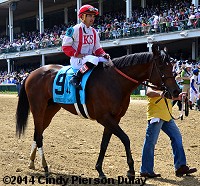 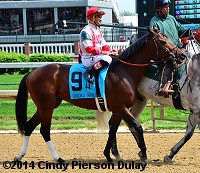 Left: Central Banker in the winner's circle. Winning trainer Al Stall Jr. said, "I thought there was going to be a ton of pace in there and when I saw him lay close and pretty comfortable, I guess they weren't going quite as fast as I thought they were. He got that outside draw as opposed to the inside draw in the Carter. And Corey (Nakatani) said when that horse came up on him on the outside that he could literally feel (Central Banker) gritting his teeth and fighting. This horse has as big of a heart of any horse I've ever had in my career, by far. He's a racehorse, that's exactly what he is."

Right: Central Banker heads out for the post parade. Winning jockey Corey Nakatani said, "Al said to warm him up anyway I wanted and that he's a horse I could do anything with so I said, 'OK, let's go get the money.' He's a horse that runs better when he has a target and I was able to tuck him in there. When (Shakin It Up) came at him, he re-broke and was all racehorse from there. He made me look good." 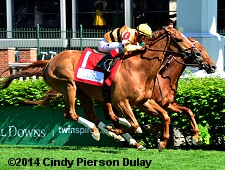 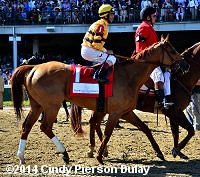 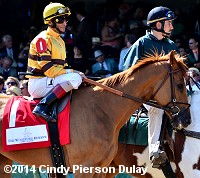 Left: Wise Dan returns after the race. Winning trainer Charlie LoPresti said, "That was the horse I worried about. That was a thriller. He won't let a horse go by him. If they get to him, he's not going to let them go by. The way he has trained and the way he's done, I would say, at this point in time, he's better than he was last year."