New York-based Revved Up and top local hope Jambalaya head a field of seven for the inaugural running of the $700,000 Northern Dancer Breeders' Cup Turf (G2), part of Woodbine Racetrack's 50th anniversary celebrations on Sunday afternoon. For those fans who can attend, there will be lots of promotions including freebies, autograph sessions, $1 Daily Racing Forms, and more.

The original Woodbine was located on the shores of Lake Ontario east of downtown Toronto. Industrialist E.P. Taylor wanted to build a new Woodbine, intended to be a showcase of Canadian thoroughbred racing. His dream became reality when Woodbine opened for racing on June 12, 1956. Many champions have raced at Woodbine, including Canadian Triple Crown winners Dance Smartly, Izvestia, and Wando, American invaders such as Funny Cide, 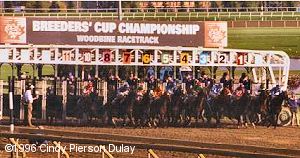 Leroidesanimaux, Holy Bull, and Skip Away, and European shippers including Dahlia, Youth, Singspiel, and Electrocutionist. Woodbine has been the focus of the racing world on several occasions, most notably in 1973 when Triple Crown winner Secretariat made his final start a winning one in the Canadian International, and in 1996 when Woodbine became the only track outside the U.S. to host the Breeders' Cup World Championships.

E.P. Taylor's legacy in racing goes well beyond this storied racing facility. Among his many champions, he bred and raced Northern Dancer, winner of the 1964 Kentucky Derby, the first Canadian-bred to accomplish this feat. After winning the Queen's Plate back home at Woodbine, the Dancer retired to stud and the rest is history. Because of the success of his progeny, today 90% of modern Thoroughbreds have Northern Dancer in their pedigrees. With the Northern Dancer Breeders' Cup Turf, Woodbine celebrates both Canada's greatest equine son and 50 years of racing excellence.

As part of the celebration, nine legendary Woodbine jockeys attended the draw as well as Noreen Taylor, vice-president of Windfields Farm which raced and stood Northern Dancer at stud. To the right is a group photo of them all. The back row from left to right is: Larry Attard, Hugo Dittfach, John LeBlanc, and Lloyd Duffy. The front row: Sam McComb, Sandy Hawley, Noreen Taylor, Bob Cormack, Richard Grubb, and Robin Platts. Below is a bit about each, but more details are available here.

Althought this is the inaugural running of this race as the Northern Dancer Breeders' Cup Turf, it was previously run as the Chinese Cultural Centre and Hong Kong Jockey Club Stakes. It is surprising that Woodbine has never had a race named for the great Northern Dancer before now, but they decided their 50th anniversary was an appropriate time to finally do this.

Christophe Clement trainee Revved Up, the 2-1 favorite on the morning line, has been training at Saratoga and comes into this race off an optional-claimer victory at Belmont Park. Leading the local contingent is Jambalaya, winner of the Singspiel Stakes last time out as well as the Breeders' Stakes last year, both over the same distance and course as the Northern Dancer. He will break from the rail for trainer Catherine Day-Phillips at odds of 3-1. Chilean-bred Porfido, the 4-1 third choice, won 2/3 of his country's Triple Crown before being imported to America. He makes his second start for new trainer Bobby Frankel and breaks from the 3 hole.

Here is the field for Sunday's Northern Dancer Breeders' Cup Turf which will have a post time of 5:07pm and will be broadcast in Canada on The Score from 4:30-5:30pm. Appropriately enough, every entrant has Northern Dancer somewhere in their pedigree, as do at least 90% of all stakes class horses in North America.