The highlight race the opening weekend of Belmont Park's Fall Championship Meeting is the $500,000 Man o'War Stakes (G1), a 1 3/8 mile trip over the inner turf course. A field of seven older horses went to the gate in this major prep for the Breeders' Cup Turf, with Cacique sent off as the 9-5 favorite off his second place finish in the Arlington Million. Also in the field was 2-1 second choice Showing Up, the Secretariat Stakes winning 3-year-old taking on older horses for the first time, and 4-1 third choice Go Deputy, coming into the race off two straight wins, the Bowling Green and then the Sword Dancer.

62-1 longest shot Ramazutti led the field the first lap of the course while hugging the inside hedge through slow fractions of 24.10, 49.84, 1:15.62, and 1:40.97 over the "good" course, with Showing Up just to his outside and 9-1 Cosmonaut settling back in third taking the 4 path. Entering the stretch, Ramazutti dropped from contention allowing Showing Up to have a brief lead. However, the favorite Cacique was just hitting his best stride after racing in fifth the whole way. Through the stretch, jockey Edgar Prado found room along the inside and Cacique quickly made the lead inside the 3/16 pole, easily holding off the late charge of Go Deputy to win by 1 3/4 lengths in a time of 2:15.68. Go Deputy had raced at the back of the pack early and put in too late a rally to catch Cacique but was able to nose out Showing Up for the place spot. 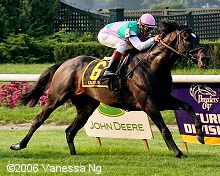 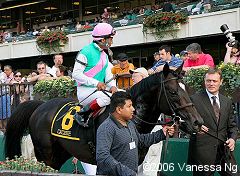 Cacique takes his walk down victory lane led by Juddmonte farm manager Garrett O'Rourke. Winning jockey Edgar Prado said, "They came running out of the gate, so I took back and stayed covered up. Everything was beautiful. I was looking for a place to go, and the horse just took off like a rocket. Out of all of his races where I've ridden him, this was his best kick." 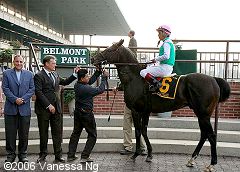 Cacique did not seem very happy to be in the winner's circle, but trainer Bobby Frankel (far left) doesn't seem to be bothered by that. Frankel said, "I'm happy. It was getting toward the end of the day, it feels like one of those Breeders' Cup days. The way he trains in the morning, he never impresses you, so it's hard to get high on him. In the afternoon, when you put him on the grass, he accelerates. This might have been his best race yet. There was more speed today. I'm thinking (about the Breeders' Cup Turf). The way he finished, how could he finish any faster? He came home the last eighth in less than 11 (seconds) on not a very fast turf course. He won the Manhattan on the lead, but I think his best race is to be firing at a horse." 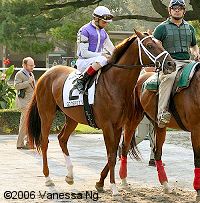 Second place finisher Go Deputy leaves the paddock to head to the track before the race. His trainer Todd Pletcher said, "He ran a super race, we were very pleased. He had a big shot coming off the turn. Cacique snuck through inside of him. He's been remarkably consistent all year. I think the Bowling Green was the race that turned the corner for him. We'll probably go to the Canadian International at Woodbine." Jockey John Velazquez, added, "He ran awesome. I was very proud of him. He had a great trip. I thought I had Cacique because he was stuck, but he got through. He got lucky, which is a credit to Edgar (Prado) because he rode a good race." 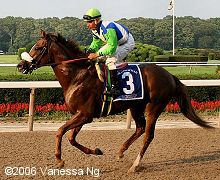 Third place finisher Showing Up returns after the race. His jockey Cornelio Velasquez said, "I was in good position, but Prado's horse, what a strong finish. The inside horse just passed me very fast. My horse really ran good."