In addition to the two races for 3-year-olds on Louisiana Derby Preview Day, there were two other stakes races contested over the Fair Grounds main track. The $125,000 Mineshaft Handicap (G3) featured a field of 8 older horses going 1 1/16 miles on the main track. Honest Man, third in the Louisiana Handicap last time out, was sent off as the 2-1 favorite over 5-2 second choice My Pal Charlie, fourth in the Breeders' Cup Dirt Mile after winning the Super Derby. 3-1 third choice Grasshopper, winner of this race last year but unraced since finishing second in the Philip Iselin Handicap at Monmouth last August, completed the top three on the board.


Jockey Curt Bourque sent My Pal Charlie to the lead immediately and he set a slow pace of 25.52, 49.19, and 1:13.04, with Grasshopper sitting a length behind down the backstretch. Honest Man was wide throughout, sitting back in third the whole way. Entering the stretch, jockey Gabriel Saez moved Honest Man to the outside of the tiring pacesetters. At the 3/16 pole Honest Man took over the lead, getting 1 mile in 1:37.71. 8-1 Good and Lucky put in a rally between horses late but was no match for Honest Man who cruised under the line 4 1/4 lengths in front, completing the trip in 1:44.16 over the fast main track. It was another 1 1/2 lengths back to 15-1 Brothers Nicholas third, and 3/4 more to pacesetting My Pal Charlie fourth. 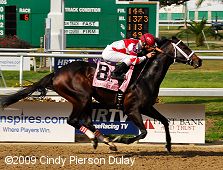 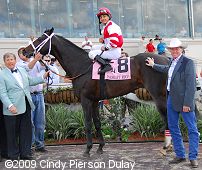 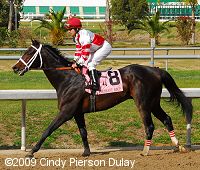 Left: Honest Man in the winner's circle. Winning jockey Gabriel Saez said, "Everything was very comfortable. We were letting (My Pal Charlie) go and I was sitting behind him, and it was comfortable after that." 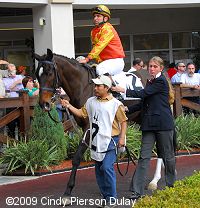 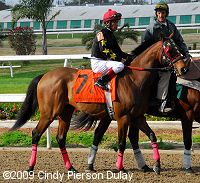 Left: Second place finisher Good and Lucky with trainer Josie Carroll in the paddock. The 8-1 fifth choice saved ground early back in fourth under jockey Patrick Valenzuela, then came through on the inside and attempted to close late but was left with too much ground to cover, finishing second beaten 4 1/4 lengths. He improved his record to 8 wins, 4 seconds, and 3 thirds in 23 starts, earning $408,915 for owners James and Alice Sapara.

Right: Third place finisher Brothers Nicholas in the post parade. The 15-1 sixth choice raced in traffic in fifth down the backstretch under new jockey Edgar Prado, then came out wide to pass tiring horses to gain third place, beaten 5 3/4 lengths. The son of Smart Strike improved his record to 4 wins, 5 seconds, and 1 third in 17 starts, earning $153,650 for owner-trainer Louis J. Roussel III.


Kicking off the stakes action on Saturday was the $75,000 Pan Zareta Stakes for older fillies and mares. After two horses scratched out, only four went to post in this 6 furlong main track sprint, with Classify sent off as the 6-5 favorite exiting a win in the Leggio Memorial last time out. In to challenge her include 8-5 second choice P.S.U. Grad, winner of an allowance last out, and 2-1 third choice Precious Kiss, third in the Esplanade last out. 8-1 Shilla, 7th in the Leggio, completed the field.

P.S.U. Grad opened a clear lead of 2 lengths down the backstretch through fractions of 22.53 and 46.53, with Classify and Shilla battling for second. Turning for home, Precious Kiss, who raced at the back of the field early, came out wide for the drive, passing the tiring Shilla at the top of the stretch. Classify inherited the lead in mid-stretch but was no match for Precious Kiss, who passed her in the final 1/16 to win by 1 1/4 lengths in 1:11.14. It was another 1 1/4 lengths back to P.S.U. Grad third, and 3 1/2 more to Shilla fourth. 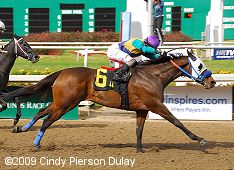 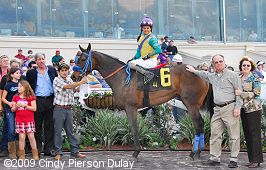 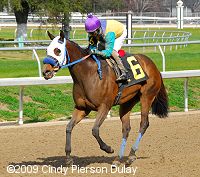 Left: Precious Kiss in the winner's circle. Winning trainer Patrick Mouton said, "I told John not to change a thing with the four-horse field. Take her back and relax, because she loves this home stretch."

Right: Precious Kiss returns after the race. Winning jockey John Jacinto said, "I took her back today. I thought they would come back to me. When I asked her, she exploded." 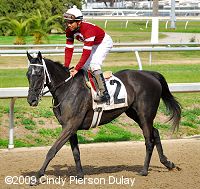 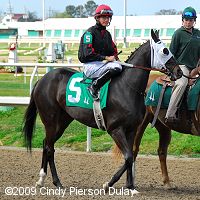 Left: Second place finisher Classify returns after the race. The 6-5 favorite was restless in the gate before the start, stalked the pace in 2nd early under jockey Shaun Bridgmohan, led briefly, but was passed late to finish second beaten 1 1/4 lengths. The Steve Asmussen trainee improved her record to 8 wins, 1 second, and 4 thirds in 20 starts, earning $270,850 for owner-breeder Winchell Thoroughbreds LLC. 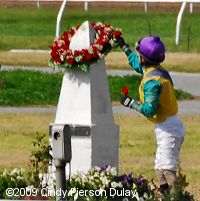 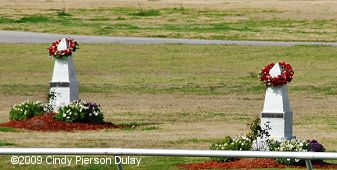 Left: Winning jockey John Jacinto places a wreath of flowers on the grave of Pan Zareta after the race.

Right: The graves of Pan Zareta (left) and Black Gold in the infield. Tradtionally, the winning jockey of the race named for them places a wreath of flowers on the marker each year. The Black Gold Handicap was held last week.