Fair Grounds Race Course in New Orleans hosted six stakes races on Saturday for Louisiana Derby Preview Day. Racing conditions were ideal, with temperatures in the mid 70's and dry conditions after several unusually cool days. The headline race of the card is the $200,000 Risen Star Stakes (G3), the major local prep for the Louisiana Derby and ultimately the Triple Crown series. A field of 13 three-year-olds went to post in this 1 1/16 mile main track feature, with Kentucky Jockey Club runner-up Giant Oak sent off as the 2-1 favorite over 5-2 second choice Friesan Fire, winner of the LeComte last time out. 5-1 Indygo Mountain, sixth in the LeComte last out, was the third choice on the board.

18-1 It Happened Again went to the front to set the pace under jockey Terry Thompson, while being stalked by 244-1 longest shot Code of Honour through fractions of 23.34, 47.61, and 1:13.64 over the fast track. Turning for home, the pacesetters tired badly and gave way, allowing Friesan Fire, who had raced just behind them in fourth, to move up to take the lead. 11-1 Flying Pegasus followed him into the stretch but Friesan Fire easily dismissed him in the final furlong, drawing off to win by 2 lengths in 1:45.11. It was another 1 3/4 lengths back to 12-1 Uno Mas, who nosed out 20-1 Nowhere to Hide for the show spot. Favorite Giant Oak was slowest away, raced near the back of the field early, but lacked running room on the turn and made a late gain once he got out, finishing fifth. 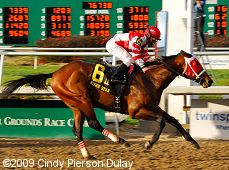 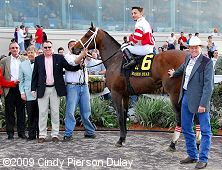 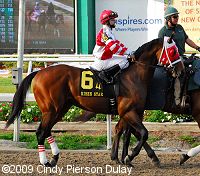 Left: Friesan Fire in the winner's circle with trainer Larry Jones on the right. Jones said, "When he finds the racetrack, he can really run. We used the workout (Feb. 2, 5f 1:04.40) to teach him to relax. It looked slow, but he finished fast. This horse is a late foal (April), combined with being an A.P. Indy, that usually means a late bloomer. We are pleased at his progress. We think his best is before him."

Right: Friesan Fire in the post parade. Winning jockey Gabriel Saez said, "I had horses on both sides of me. When it opened up, I ran past both those horses and kept the pressure on." 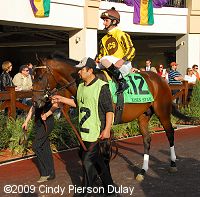 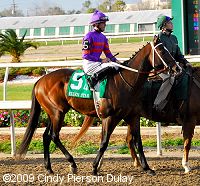 Left: Second place finisher Flying Pegasus in the paddock before the race. His trainer Ralph Nicks said, "I thought the top three was pretty clear. The other horse had two races before over the track." His jockey Robby Albarado said, "He ran a huge race. The winner has been over the track a couple of times already."

Right: Third place finisher Uno Mas in the post parade. The 12-1 shot raced in 7th early under new jockey Brian Hernandez Jr., then came out four wide for the drive to finish third beaten 3 3/4 lengths. The Steve Asmussen trainee improved his record to 2 wins, 2 seconds, and 1 third in 7 starts, earning $90,800 for owner Mark Wagner and Cathy and Bob Zollars. 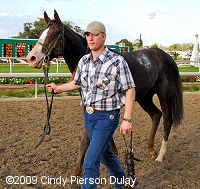 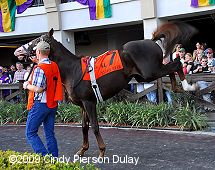 Left: Fifth place finisher and beaten favorite Giant Oak heads back to the barn after the race. The 2-1 favorite was last out of the gate and raced in 11th early under jockey Edgar Prado, lacked room on the far turn and made a late gain to fifth once he got outside. The Chris Block trainee has a record of 2 wins and 1 second in 5 starts, earning $87,396 for owner-breeder Virginia H. Tarra Trust.


The distaff counterpart to the Risen Star is the $150,000 Silverbulletday Stakes (G3) for 3-year-old fillies also at 1 1/16 miles. Just Jenda was sent off as the 11-10 favorite in the field of 8, exiting a win in the Tiffany Lass last time out. In to challenge her included 3-1 second choice Four Gifts, third in the Tiffany Lass after winning the Delta Princess in December, and 9-2 third choice War Echo, third in the Golden Rod at Churchill Downs last time out.

7-1 War Tigress battled on the front end with 55-1 Southern Yankee through early fractions of 23.61, 47.37, and 1:12.64, while favorite Just Jenda sat in sixth early, wide throughout. At the top of the stretch, the pacesetters tired as Four Gifts, who raced in fifth saving ground early, came out three wide and drew 2 lengths clear with a furlong to go. However, War Echo rallied from sixth to pass Four Gifts at the 1/16 pole to win going away by 1 1/2 lengths in 1:45.20. It was a long 7 3/4 lengths back to favorite Just Jenda, who put in a late rally of her own but was left with too much ground to make up. 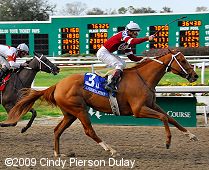 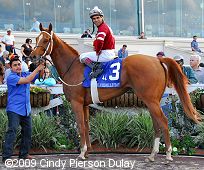 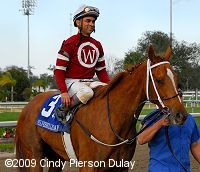 Right: War Echo in the winner's circle. Winning trainer Steve Asmussen said, "She settled nicely today and ran a good race. She's Pyro's (three-quarters) sister and is gorgeous physically. She can be pretty aggressive, but today, she settled."

Left: War Echo in the post parade. Winning jockey Shaun Bridgmohan said, "She ran great. She was so composed today. When I asked her at the top of the stretch, she gave me what she had." 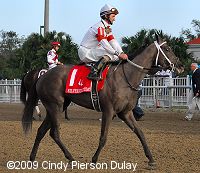 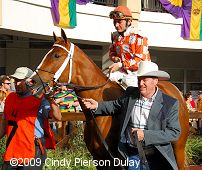 Right: Third place finisher and beaten favorite Just Jenda being led by trainer Larry Jones in the paddock. Her jockey Terry Thompson said, "She didn't have the punch she had last time (in the Tiffany Lass)."