On Louisiana Derby Preview Day at the Fair Grounds, a total of 6 stakes races were contested, 2 of which were over the turf course. The $125,000 Fair Grounds Handicap (G3) featured a field of 8 older horses (7 betting interests) going about 1 1/8 miles. The two-horse Sam-Son Farm entry of French Beret and Windward Islands was sent off as the 2-1 favorite. They both come out of the Colonel Bradley Handicap, won by French Beret with Windward Islands fifth. In to challenge them included 5-2 second choice Jimmy Simms, winner of the Woodchopper last time out, and 7-2 third choice Diamond Tycoon, exiting a 2 race winning streak both in allowance company.

Jimmy Simms was sent to the lead immediately by jockey Shaun Bridgmohan and he set a slow pace of 25.22, 52.01, 1:16.46, and 1:40.55 over the firm course while being stalked by 8-1 Corrupt for the first lap. French Beret sat in close stalking position third, while Windward Islands was another 1 1/2 lengths behind in fourth. With less than a furlong remaining, Jimmy Simms tired and faded to eventually finish fifth. Diamond Tycoon, who raced in 7th early, came out very wide into the stretch and closed with a rush down the center of the course to win by 1 1/4 lengths over Windward Islands in 1:52.12. It was another 3/4 length back to Corrupt third. 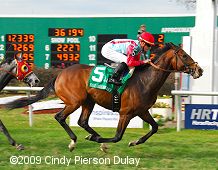 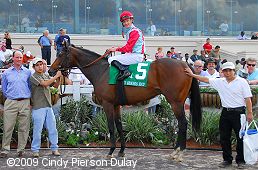 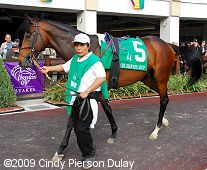 Right: Diamond Tycoon in the winner's circle. Winning trainer Andrew McKeever said, "The distance was not a concern, the way this horse takes to the course. Here at the Fair Grounds, we changed his style from Kentucky, where he was close. He likes to come from behind. It's going to be hard to leave New Orleans with this horse."

Left: Diamond Tycoon in the paddock before the race. Winning jockey Julien Leparoux said, "Keep them with their running style, even if it's a slow pace. He runs from behind. He really has a nice kick at the end." 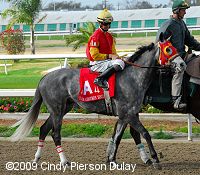 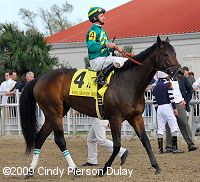 Left: Second place finisher and beaten favorite Windward Islands in the post parade. His trainer Mark Frostad, who also trains 6th place French Beret, said, "(Windward Islands) hasn't been running like he can. Coming in, we thought he'd run a much better race. The slow pace didn't set up for (French Beret)."

Right: Third place finisher Corrupt returns after the race. The 8-1 fifth choice stalked the pace for the first mile under regular rider Robby Albarado, but was no match for the top two who passed him in the final furlong. The Neil Howard trainee improved his record to 4 wins, 1 second, and 3 thirds in 11 starts, earning $193,876 for owner-breeder Team Block and co-owner William S. Farish.


The $75,000 Colonel Power Stakes featured a field of 6 older horses sprinting about 5 1/2 furlongs on the turf. 3-2 favorite Chamberlain Bridge came into the race off a second place finish in the Bonapaw Stakes in December. 9-5 second choice Storm Treasure, who won the Bonapaw, and 3-1 third choice Rouse the Cat, second in the Holiday Cheer Stakes at Turfway, completed the top three on the board.

Jockey Jamie Theriot sent favorite Chamberlain Bridge to the front immediately and he set a pace of 22.40 and 45.67 while being stalked by Rouse the Cat down the backstretch. Turning for home, Theriot asked him for run and got it, as Chamberlain Bridge steadily increased his lead through the stretch, cruising under the line 3 lengths in front of 7-1 Grand Traverse in a time of 1:03.33 over the firm course. It was another neck back to Rouse the Cat and deep closer Storm Treasure, who dead-heated for third. 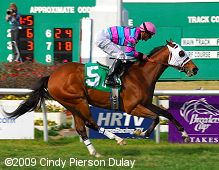 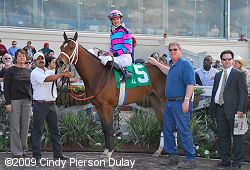 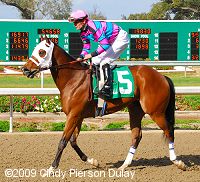 Left: Chamberlain Bridge in the winner's circle. Winning trainer Bret Calhoun said, "Last time out, we tried slowing down the pace, but today, we let him run his race."

Right: Champerlain Bridge returns after the race. Winning jockey Jamie Theriot said, "Today we went back to old tactics. We let him set his fractions the way he likes to run." 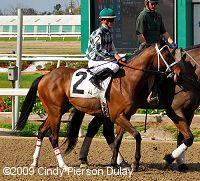 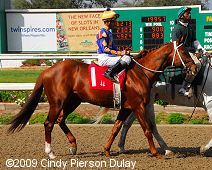 Right: There was a dead heat for third place with Storm Treasure was one half of it. The 9-5 second choice raced in last for the first 1/2 mile under Shaun Bridgmohan, then closed well to get third beaten just 3 1/4 lengths. The Steve Asmussen trainee improved his record to 6 wins, 9 seconds, and 6 thirds in 31 starts, earning $679,394 for owner Mike McCarty. 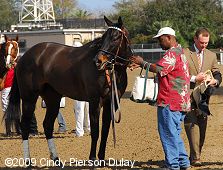 The other half of the third place dead heat for third place was Rouse The Cat. The 3-1 third choice contested the pace early under new rider Gerald Almodovar, drew even with Chamberlain Bridge at the 1/4 pole, but weakened late to finish third beaten 3 1/4 lengths. The Ollie Figgins trainee improved his record to 7 wins, 4 seconds, and 4 thirds in 20 starts, earning $312,935 for owner Ray M. Pennington III.