The Kentucky Cup Day of Champions is the highlight of the Fall Meet at Turfway Park. Five stakes races, each with Breeders' Cup implications, were contested over the fast Polytrack surface. Racing conditions were ideal on Saturday, with sunny skies, temperatures in the mid 70's, with an estimated crowd of 13,640 on hand to witness one of the biggest racing days in the Cincinnati area, many packing the paddock and apron for the very highly anticipated rematch in the Classic.

The marquee event on Saturday was the $350,000 Kentucky Cup Classic for older horses going 1 1/8 miles. This year the Classic came up with just four horses, but was billed as a match race between two rivals from this year's Triple Crown. Kentucky Derby winner Street Sense was sent off as the slight 4-5 favorite, coming off of wins in the Jim Dandy and Travers Stakes at Saratoga. 9-10 second choice Hard Spun, who was second in the Kentucky Derby, returned to the track where he won the Lane's End Stakes in March. He came into this race off a win in the King's Bishop at Saratoga.

The race definitely lived up to its billing as a match race. Hard Spun, breaking from the rail, went right to the front as jockey Mario Pino kept him on the rail forcing Street Sense to race out in the 2 path the whole way. Under slight pace pressure from Calvin Borel aboard Street Sense, Pino controlled the pace through easy fractions of 24.45 and 48.18, while 46-1 longest shot Cat Shaker stalked them in third and 6-1 third choice Stream Cat trailed. Around the far turn, Borel asked Street Sense to put in a bid for the lead, but Hard Spun was up to the challenge. Picking up the pace, Hard Spun got 3/4 in a quick 1:11.46 as Street Sense had moved up alongside closing the gap to just 1/2 a length. The pair fought head to head to the 1/16 pole when finally Hard Spun dug in and pulled away to win by 1 1/4 lengths in a time of 1:48.48, less than 1/5 of a second off the track record. It was a long 3 1/4 lengths back to Stream Cat in third, and 11 1/4 more to Cat Shaker in last. Hard Spun is the first horse to win both the Lane's End and the Kentucky Cup Classic in the same year. 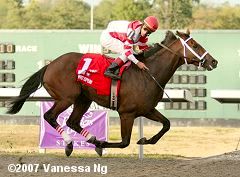 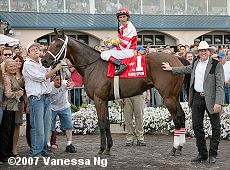 Hard Spun in the winner's circle. Owner Richard Porter of Fox Hill Farm said, "That was fantastic, just as advertised! Unless something that I can't think of comes up, he's going to the Classic. That's been the plan all along."

His trainer Larry Jones (far right of photo) said, "He heard about this match race and was ready to get it on. This was a very good (Breeders' Cup) prep. He ran so well off of Polytrack last time, so this should set him up perfectly. I think our horse contained himself as long as could. He was ready to go. We knew that with the pace scenario, we wanted to make Street Sense chase us. There are probably at least 90% of horses out there that couldn't do what he's done. We knew that Monmouth is a speed favoring track, so we thought the King's Bishop was a good spot and this race also fit well. He liked the 7 furlongs and all we had to do was back off him a little bit and sharpen him up. I was waiting with all of you (the media) to see what Mr. Porter would say and I was happy to hear the Classic." 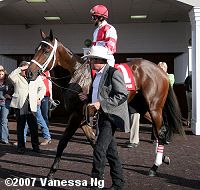 Hard Spun in the paddock being led by trainer Larry Jones. His jockey Mario Pino said, "Going in we knew it was going to be a match race because it was only a 2 horse race on paper. I got him to relax and I felt him crawling along early. At the 3/8 pole he dropped his head down, going faster and faster to the wire." 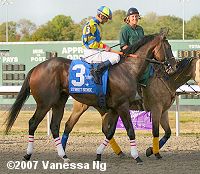 Second place finisher and beaten favorite Street Sense in the post parade. His trainer Carl Nafzger said, "We were right there and we got beat. We came up here to win the race. Let's not make excuses. That's horse racing. I think it was a great run. We ran a good race. We're ready to go on. It was up to him at the head of the lane to get by Hard Spun. I thought he could do it. But, it was hard to get by anyone all day. He just outran us. I just think Larry's horse ran a better race than we did and I mean it. There's a lot of excuses when you lose, but let's put it this way. When you get beat you get beat." 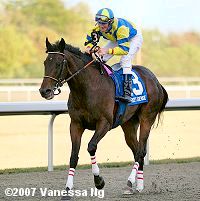 Second place finisher Street Sense returns after the race. His jockey Calvin Borel said, "You can't go that slow (early) and catch a horse like that. Don't worry, my horse will show up in 4 weeks. He always struggles a bit on Polytrack, but that sets him up perfectly. I ain't worried about it. In 4 weeks, he'll be a different horse."

A field of eleven older fillies and mares went to the gate in the $175,000 Kentucky Cup Distaff (G3) at 1 1/16 miles. Danzon was sent off as the lukewarm 2-1 favorite off a 5th place finish in the Diana at Saratoga, over 5-2 second choice India, third in the Molly Pitcher at Monmouth last out. 7-2 third choice Kettleoneup rounded out the top three on the board, coming off a fourth place finish in the Molly Pitcher.

148-1 longest shot Tuffted contested the early pace with 5-1 fourth choice Pleasant Hill first time past the stands and around the clubhouse turn through fractions of 23.74 and 47.35 before the early pacesetter suddenly dropped back to last. 26-1 Eyes on Eddy took over the lead on the far turn through 3/4 in 1:11.75, but the fast pace set the race up for the closers. Favorite Danzon, who had raced in tenth early, angled out three wide at the end of the back straight for running room and started to move up on the field, splitting horses on the turn into the stretch. At the 3/16 pole Danzon took over the lead and drew off through the lane to win by 5 lengths over 13-1 Delicate Dynamite in a time of 1:43.42. It was another length back to Kettleoneup who rallied from last. 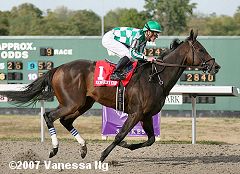 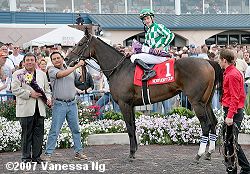 Danzon in the winner's circle. Her trainer Patrick Biancone (holding the bouquet) said, "She's a nice filly. She's been training well and we thought she'd like the Polytrack. She's a filly that likes soft going and with all the dry weather, we haven't been able to run her on the turf. We have a lot of options for her. She's eligible for everything. We'll look at the E.P. Taylor (Stakes at Woodbine) and the (Breeders' Cup) Filly and Mare Turf." 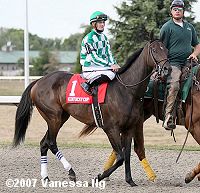 Danzon in the post parade. Her jockey Julien Leparoux said, "She broke good and like usual, backed off the pace. We were cruising along and I asked her picked up around the turn. She responded and won easily." 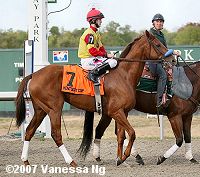 Second place finisher Delicate Dynamite in the post parade. Frank Bernis, assistant to trainer Tom Amoss said, "She ran great. The other horse was just too much for her. We got a good trip. We were outside as was the winner. No complaints about her trip at all. She's game and tries hard every single time."

Her jockey Brian Hernandez said, "Tom Amoss did a great job with her. I thought we were the winner turning for home. I turned her loose and she responded, but we got run down." 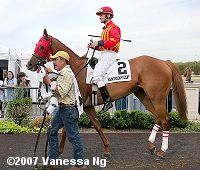 Third place finisher Kettleoneup in the paddock. Her jockey Calvin Borel said, "She ran a good race. She kind of struggled with the track. She's run over it before. But she ran all right." (On the late charge): "She always runs like that."