The $1 million Travers Stakes (G1) is the highlight of the Saratoga meeting. The "Midsummer Derby" features the best 3-year-olds of the east going 1 1/4 miles around the main track, and usually has year-end championship implications. This year, Kentucky Derby winner Street Sense was sent off as the 2-5 favorite in the seven-horse field, coming off a runaway victory in the Jim Dandy in his last start. In to challenge the Carl Nafzger trainee were 9-2 second choice Sightseeing, who was third to Street Sense in the Jim Dandy, and 8-1 third choice C P West, the Jim Dandy runner-up. A crowd of just 38,909 was on hand, under sunny skies with temperatures in the mid 90's.

C P West was quickest out of the gate and led the field after an initial quarter mile in 23.68, but then gave up the lead on the backstretch to 10-1 Grasshopper. Grasshopper was stalked by C P West through a half in 48.18 and 3/4 in 1:12.42 over the fast main track, before C P West faded from contention. Grasshopper led the field into the stretch after 1 mile in 1:36.93, but Street Sense, who had stalked the pacesetters in third the whole way, angled out slightly to move up alongside Grasshopper for the drive. The pair battled head to head from the top of the stretch to just outside the 1/16 pole, when the favorite dug in and pulled away, getting the hard-fought victory by just 1/2 a length in 2:02.69. It was a long 10 1/4 lengths back to late-running 50-1 longest shot Helsinki in third, who finished a neck ahead of Sightseeing in fourth. 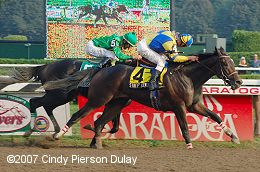 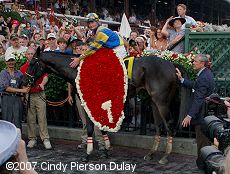 Street Sense in the winner's circle with trainer Carl Nafzger. Nafzger said, "I never worry about where Calvin's going to have him. That's Calvin's business. When I saw where he was and saw the pace setting up slow, I knew Calvin had him right where he had to be. That's one of Calvin's fortes, how to read a pace. He nearly always will finish the job if he gets hooked up. When he's hooked up eyeball-to-eyeball, he goes on. Last month in the Jim Dandy, when he was head-to-head with C P West, he went on and finished his race off until he got to the lead. Once he gets a length on the lead, that's when he pricks his ears forward. Grasshopper just said, 'I ain't going to give you any time to prick your ears forward.' Grasshopper ran a great race." 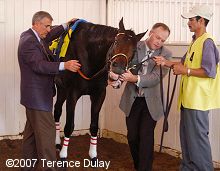 Trainer Carl Nafzger saddles Street Sense for the 2007 Travers Stakes. Nafzger said, "Street Sense will go back to Kentucky and get freshened up and ready for his next out. If he doesn't come out of this right, he could go straight to the Breeders' Cup, like we did with Unbridled. This horse can do anything. Heck, he's been in my barn 16 months and he's still running." Nafzger became the second trainer in 31 years to sweep the Alabama (with Lady Joanne) and the Travers in the same year. Jockey Calvin Borel rode both of them. 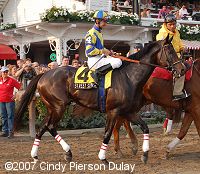 Street Sense in the post parade for the Travers. His jockey Calvin Borel said, "When I hooked (Grasshopper) up, I thought I had him measured pretty good and in the last 40 yards when (Street Sense) got by him, he went to messing around. I hit him a couple times left-handed, and then he kind of put it away. I know how Street Sense is. Once he gets in front, he kind of gives up a little bit. I let him mess around for 40 or 50 yards, and then I hit him left-handed quick and he pulled away by 1/2 length. He's a colt that likes to be on the fence, and when he's not on the fence, he doesn't feel that sure of himself. The track here is so narrow and the crowd, I don't know why, but he just gets to switching leads and messing around. He does what I want him to do. So as long as he keeps doing that, I ain't worried." 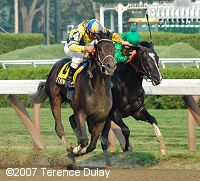 Street Sense and Grasshopper battle down the stretch. Street Sense's owner James Tafel said, "The second time around is just as sweet to me. The horse is something we are very proud of. The horse, and the trainer and the job he did and Calvin and the ride he did." 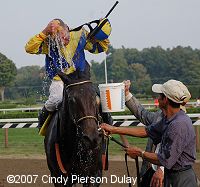 Jockey Calvin Borel puts ice water on his own head after finishing with Street Sense. It was an exceedingly hot day with a heat index over 100 degrees. Street Sense is just the 10th horse to sweep the Kentucky Derby and the Travers. 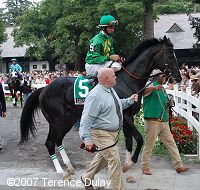 Second place finisher Grasshopper jumps around in the paddock as they head out for the track. His trainer Neil Howard said, "Street Sense is unbelievable. We were thrilled; it was a great effort. We got beat by an unbelievable horse. He was training well and coming off a good race over the track. I thought there was a chance. I was excited, but I was trying to act like I had been there before. He's a nice colt and he has never run a bad race. We might have to try him again."

His jockey Robby Albarado said, "At every point, I thought I could beat him. I'm not taking anything away from Street Sense. He's a champion. He proved it here. Ideally, I wanted to sit off C P West. I saw an opportunity and took the lead. I know it isn't his forte, but the circumstances dictated that. We had plenty to fight back right away. Street Sense is a good horse. He has been in these battles. Mine hadn't. It was all brand new to him." 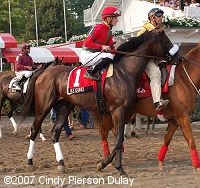 Third place finisher Helsinki in the post parade. His trainer Nick Zito said, "Helsinki ran great and C P West just didn't get into the groove with Grasshopper. I guess the Jim Dandy took too much out of him. Like I said, Helsinki was a live horse. I told everybody he wasn't that bad. He ran good. It looked like (C P West) was going to get the lead easy and he needed to be on the front end. Once we weren't on the front end, we had no shot. Helsinki will stay running 1 1/4 miles, and with C P West, I'll check with Mr. (owner Robert) LaPenta and see what he wants to do."

His jockey Julien Leparoux said, "He sat back like usual and then made his run. He ran very good. He closed really good. We took a piece of it, and it was good."